Caleb turned 3 on June 16th and we invited our friends and family over to celebrate this past weekend (his bday always coincides with Father's Day so we try to space his party from that). His party was so much fun! It turns out that 3 years olds love a good party and are way too much fun to plan for and celebrate. He has a handful of little friends and cousins that he loves and they all had a blast together on Saturday. Since they're all getting a bit older, they don't need us (parents) as much and truly play together!

Months ago, Caleb told us he wanted to have a dinosaur birthday party. Its sort of funny because, while he does like dinosaurs, I wouldn't have said really say he's into them. We see them at the museum every time we go and he loves the exhibit while we're there. But we don't actually have many dino toys or anything. I think the anticipation and regular chats about his upcoming dino party just increased his love for them and the entire party planning process was so much fun. And now that we've been talking about dinosaurs non-stop for the past month or so- I would say he is fully into them now :) 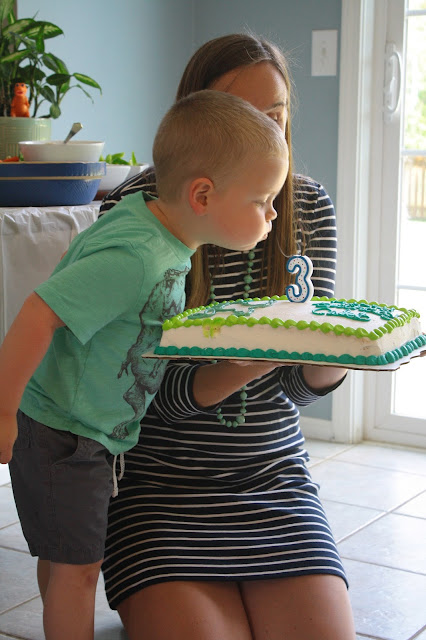 I know that everyone approaches kid parties differently (hi, pinterest). I like little details and adding some personal touches, but have a limited budget and a main focus of making the party fun for the birthday boy. I had three goals at the onset of planning Caleb's 3rd birthday: to not become stressed/overwhelmed, to keep it simple-ish, and for Caleb to have fun. I'm obviously biased, but I think we nailed all three!

The menu was really simple and took little/no prep! We had pizza delivered from Pizza Hut (SO affordable) and ordered a basic cake from Wal-mart. I actually couldn't find a local grocery store to do a dinosaur cake like I wanted (not dark/Jurassic park themed). So instead, I just ordered a sheet cake in the colors I wanted and had them only add the words. Then I printed out a T-Rex silhouette, cut it out, traced it onto the cake with a toothpick, and then piped around it with store bought icing. Not winning any awards, but Caleb loved it! I think the cake was $20? And I love a delicious, sugary icing covered grocery stored cake.

Other than the pizza and cake, we kept everything else simple (notice the theme?). Veggies and dip, watermelon wedges, grapes & blueberries, Bugles, and (not pictured!) cups of dirt pudding. I also added two small bowls of mini pigs-in-a-blanket and crackers because Caleb had been specifically telling us he wanted to eat dinosaur cake, crackers, and hot dogs at his party 😂. 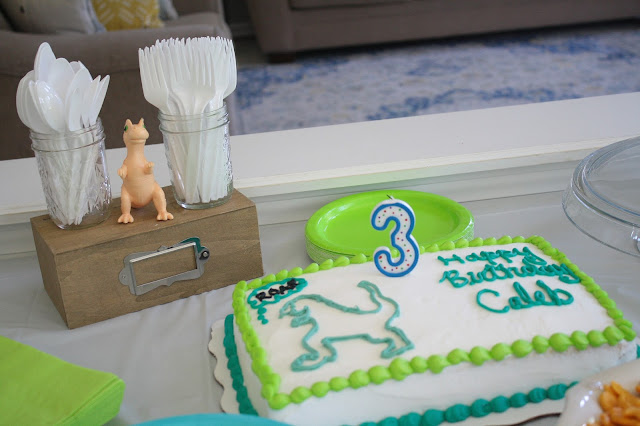 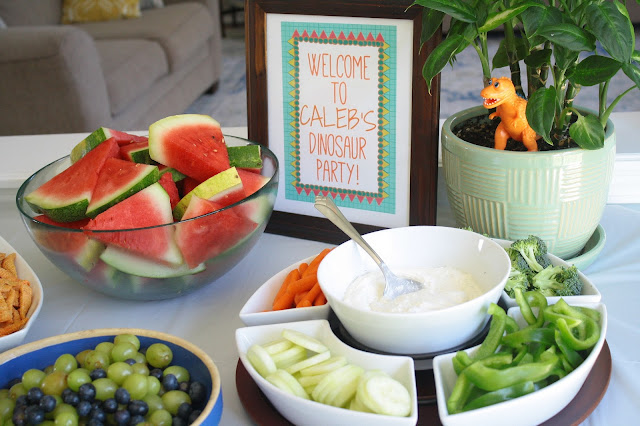 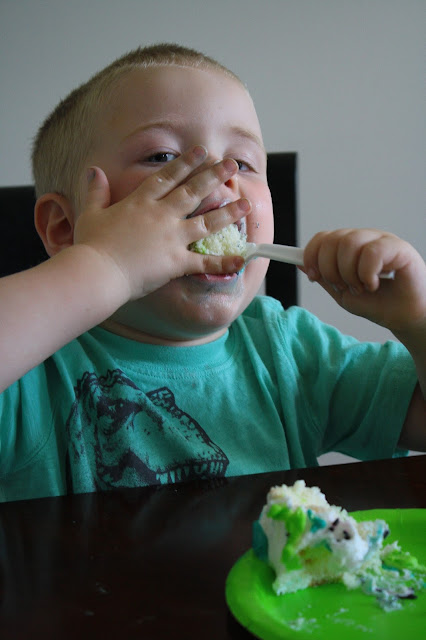 Since Caleb is only three, he isn't terribly into games/party activities. I wanted to do something, but to also make sure it was easy enough for 3 year olds. So I made a little dinosaur dig! Originally, we had planned for the party to be outside and to use our big outdoor sandbox for the dig. But lots of rain the day before the party meant our backyard was just too soggy and we moved the whole party inside. I was bummed for a hot second, but then remembered that we do love our house and it actually worked out perfectly! We used our DIY sandbox for an inside Dino Dig- I just put a dropcloth down to help catch the loose sand and left the tools nearby for kids to use. You guys. I was sort of afraid it would have been a waste of effort (it took me a few tries to get the dinosaur fossils to come out right). It was a HIT! I think every single kid spent some time digging for bones, and not because we ever formally announced it. We just set it up in a prime spot and kids just discovered it on their own. I think we had 13 kids there, ranging in age from 1-5 so it was fun to see that it was a fun activity for them all! (and now Caleb has a bag full of dinosaur bones leftover to play with!) 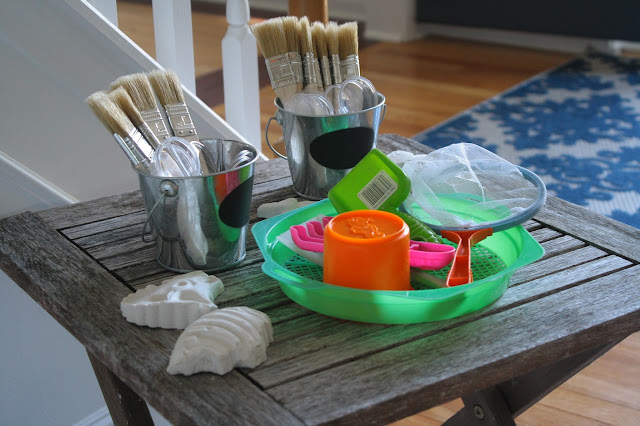 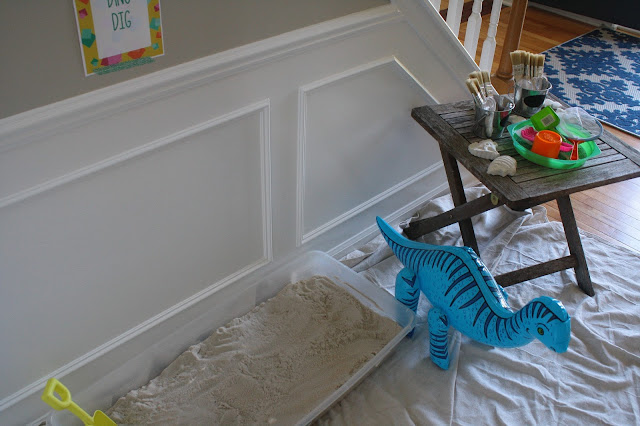 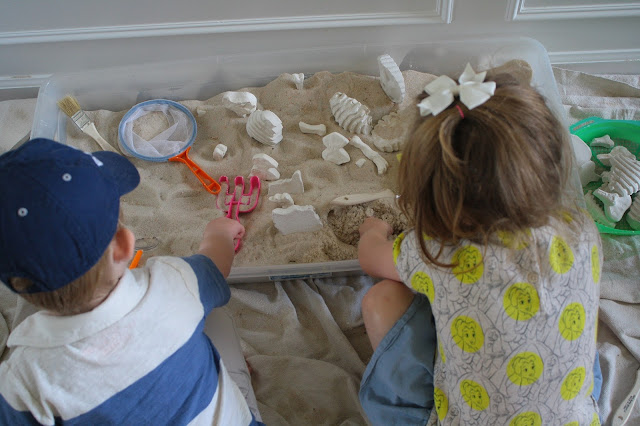 The only other fun thing I added for the kids was a handful of inflatable dinosaurs. I spent $35 and it was worth every penny. The kids loved them! The giant T-Rex was a hit with most (some were a little scared) and they took turns wrestling with him or pretending to ride on his back. I'm not even sad that we have them leftover because I imagine the boys will love getting them out from time to time to play! I lost my phone during the party and didn't pick up my camera much, so I didn't get any photos of the kids playing with the dinosaurs- but I promise they were a hit. Here are some before and after photos of Caleb still loving them...and the BEST video of him seeing his giant T-rex for the first time. 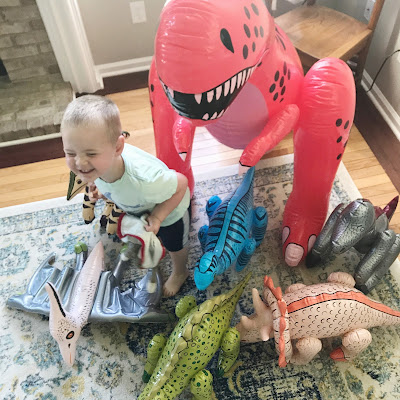 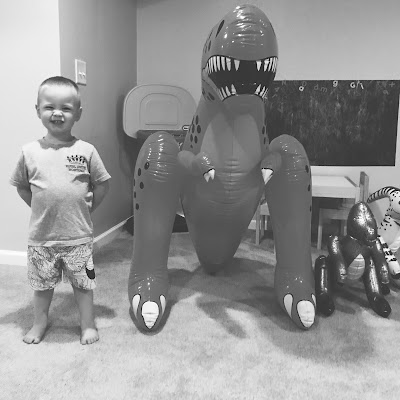 Caleb and T-Rex from katie rush on Vimeo. 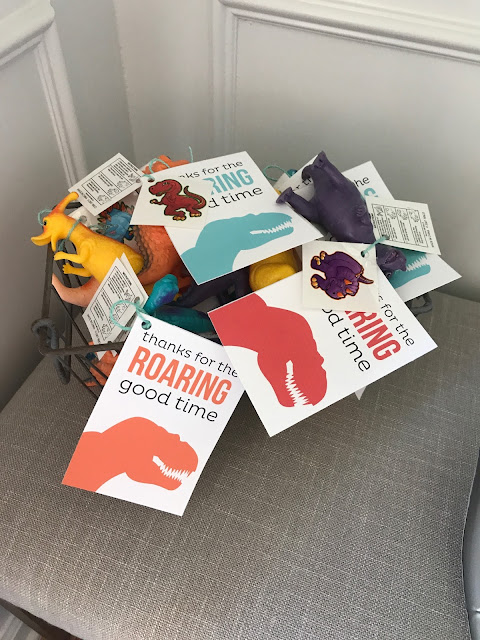 Lastly, I put together simple favors for all the kids. I snagged different mini-dinosaurs at the dollar store and tied a thank you and some dinosaur temporary tattoos to each. I set them in a basket by the front door so they could grab them on their way out. Caleb was really excited and kept randomly giving his friends their favors throughout the party because I made it super clear to him when we bought them that they were for his friends (and not for him to play with in the weeks leading up to the party!). 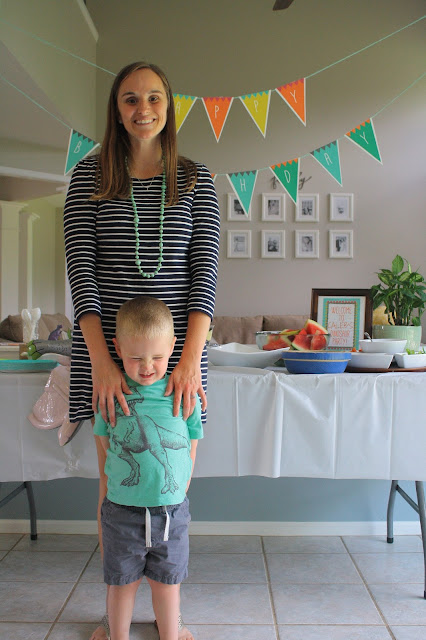 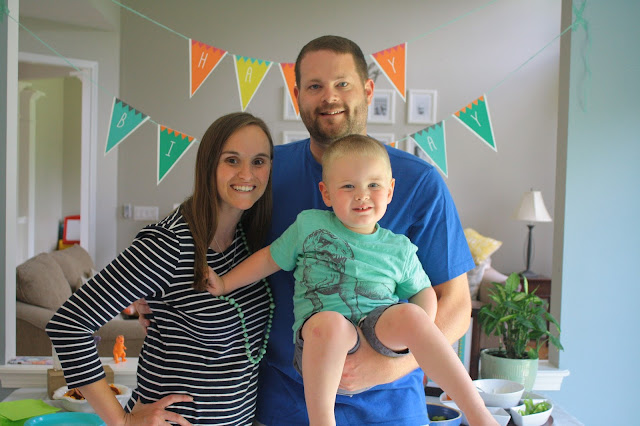 The entire party (and planning process) was just plain fun. Being a parent has so many different parts, and having the chance to intentionally do things that bring our kids joy is one of the best! My most favorite thing from the whole day was just watching and hearing Caleb- with his friends, family, his dad, and watching him take in the wonder of it all. Celebrating him was the best! (Tyler was, in fact, at the party. He was just busy eating, dumping sand everywhere, or going down for an early nap and too busy for any family photos!)