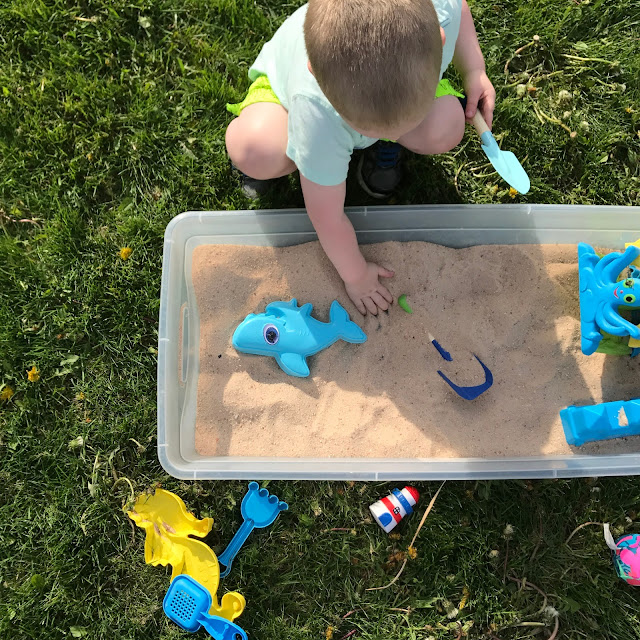 I posted a picture of my kiddos playing in our little sandbox last week and immediately had a dozen messages with questions about it. I am absolutely not the first person to think of this, but it's too good of a life hack to not share!

While we lived in the limbo of moving/not moving/moving last summer, I felt ANTSY. The backyard at our old house wasn't awesome for a toddler and I didn't feel great about letting Caleb play in it. I also didn't want to spend money on a solution or find ways for it work for us because I knew/hoped we'd be moving soon. Enter the budget sandbox!

I actually stumbled on the idea of a DIY water table and set out to make one. While shopping for a plastic container to serve as the table, I decided to buy two so that I could fill one with water and other with sand- then swap them out whenever we wanted. I built a frame to hold the boxes- but it was super jank and it didn't make the move with us.

This truly is one of the boys' favorite outdoor toys, only tied with the playset the previous homeowners left behind. I usually keep it in the garage most often and pull it out to the driveway in the evenings while we kill time waiting for Justin to get home from work. Tyler is old enough this year to play and he loves it too! I moved it to the backyard last week and its been fun to see how long it truly does hold their attention.

Funny enough, my parents actually gifted Caleb this real full-scale sandbox for his birthday last year, but we never got around to putting it together with the late summer move. I finally did this weekend and the boys LOVE it. (if you're in the market for a nice sandbox, I recommend this one! Affordable as bigger grandparent gift, crazy easy to put together and just the right size) We've already logged a few hours in it and filled two diapers with sand (tyler). Even with the new, big sandbox- we'll keep our little one around! Like I said, its perfect for storing in the garage and pulling out when we're waiting for Justin, doing yardwork, etc.

Anyways, you don't care about any of that. Want to make your own budget sandbox? If you have $20 and time to run to Walmart, this 'project' is for you. (you can't see, but I'm using air quotes and laughing as I type that because this is the least project-y project you could ever do. Ready?

First, buy a storage container. Next, buy some play sand. Finally, pour the sand into said container. You're done! 😂 But seriously, if you want the exact details of ours (its big enough for two kiddos to easily play but still small enough to store and move around easily):

-I used this exact container. It's $9.59 at Target but I'm almost positive I bought it for cheaper at Wal-mart. The size is great and having a lid is key! We actually left it outside most of winter and the sand stayed dry and the container is still in perfect shape.

- I believe I bought 3-4 bags of play sand from Wal-mart. They're $2.78/bag which is incredibly affordable. A note about sand: Justin found SUPER cheap ($1.99/bag) sand at Menards and we used that to fill our bigger, permanent outdoor sandbox. Even still, I would recommend the slightly more expensive play sand I linked above because it's nicer. A bit more clean, no big rocks, and better for a box you want to keep and use indoors/driveways/on patios. The cheaper sand is just that, cheaper. Its perfect for a sandbox that will be rained on and survive the winter, but probably not for a nicer box that will have a lid and doesn't literally sit on the ground with grass and bugs.

- The boys have somehow accumulated a ton of sand toys over time (mostly as little gifts from grandparents!) but I also randomly found a fun sand/water funnel/wheel at Nordstrom Rack last summer. Super random, I know. (here's the exact one) The dollar store, Target's dollar spot, and amazon are other great places for inexpensive sand toys. Last year Caleb loved simply hiding rocks, pinecones, and sticks in the sandbox and then digging for them, so don't overthink the toys! (I like this little set from Amazon a lot) 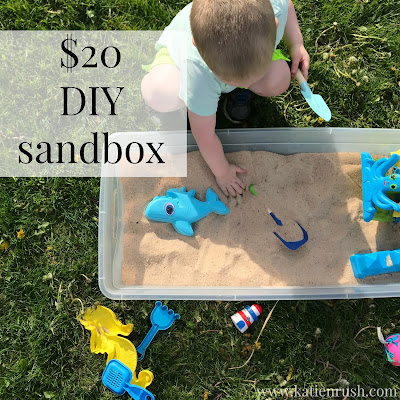 Such a fun idea Katie! My mother in law bought a sand table for Aiden to keep at her house and we "borrowed" it aka still have it, but need to give it back and I love this inexpensive option for playing in sand! Thanks for sharing friend.