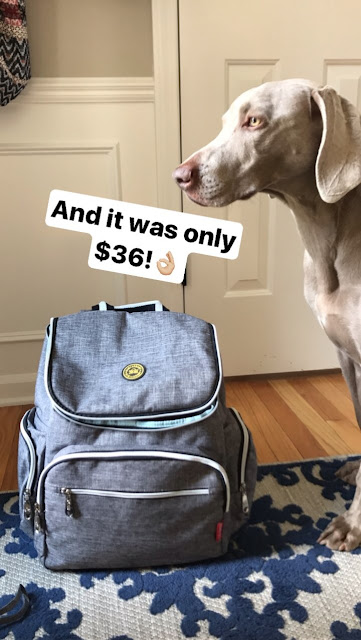 With a 3 and 1.5 year old, I'm by no means an expert at kid gear. But we've found a handful of things lately that we just really love, so I thought I'd share them. Plus, I got lots of questions when I posted my new diaper bag on instagram last weekend- so I'm linking that below :)

Diaper backpack (in Grey-2 option). I've been wanting a backpack for several months and a few weeks ago I finally found one I love/could afford. After lots (too much, probably!) of research and reading reviews on Amazon, I bought this baby AND. I. LOVE. IT. Justin's been laughing at me since it arrived because I talk about it a lot. I ordered the 'Grey-2' option, which is different than the others because while it is a backpack, the main compartment has a smaller zipper flap that doesn't zip from side to side (which would make stuff fall out!). It stands on its own no matter how full it is, has a fun pocket just for wipes, and also has an accessible pocket on the back for convenience. Bonus: Justin doesn't feel silly carrying it around, and it was inexpensive! Only $36.99. I found a small stitching defect a few days into using it and (even though it doesn't impact the function or anything) I contacted the Amazon seller and they're sending me a brand new one! If you're in the market for a good diaper backpack that doesn't break the bank, I totally recommend this one. (It's made by a brand I've never heard of, but I read TONS of reviews and it is highly rated and compares well to others in higher price points.)

Aldi snacks. Ok, so these aren't kid specific and you can find snacks anywhere. But I find that most products are the same quality at Aldi as bigger grocery chains, but for a fraction of the price. I'm loving the applesauce/fruit blend pouches and freeze dried fruits righter now. My kids are snackers and we try to have healthier options- especially when we're on the go. I like that these are organic, inexpensive, and tasty! My boys LOVE freeze dried apples and since they're so inexpensive, we usually go through a bag or two each day. Add to that the cinnamon apple straws and veggie chips, and our pantry is stocked for the week!

Beach/bath towels. I have mentioned these a dozen times before, but I honestly love them. Just added a couple more to my cart to stock up on for the boys! We use them at the pool, but also daily for baths at home. They hold up incredibly well, are thick, and the boys love the cozy hood!

Divided plates. I fully embrace kid-friendly, colorful dishes and these are hands down my favorite. They seem to hold up better than our other Ikea and Target kid plates. They're made from recycled milk jugs and you can find them at Wal-mart. Bonus- they're microwaveable! I like that they are small enough to fit on our highchair trays and big enough to have three separate compartments. The same company makes flatware and cups, too!

Laurie Bernker Band. Ok, let me preface by saying these music videos are cheesy. Aren't all kid songs? But my boys love love love them, especially the Dinosaur and Goldfish songs. We dance to them daily!