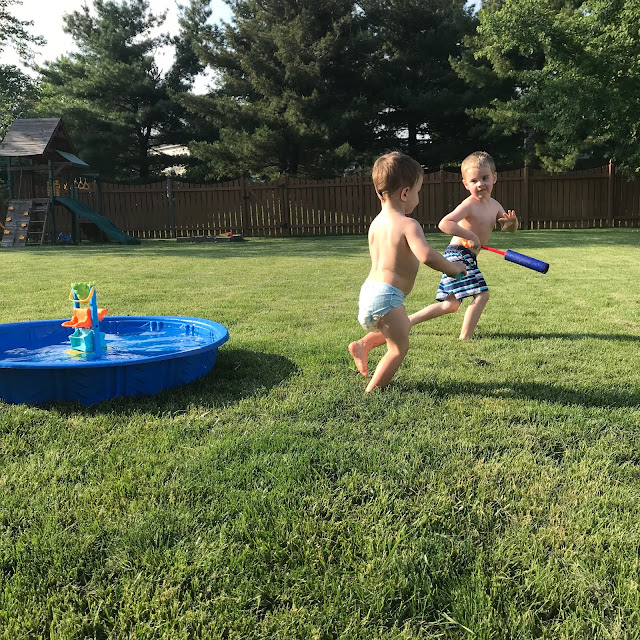 I wrote a little earlier this week about my goal of being quieter this summer. I feel like that's a vague thing to say. Maybe I should use the word 'simplify' instead? Either way, what I mean is that we're not filling our days and schedules just for the purposes of having full days, I'm not saying yes to things so quickly, and we're trying to just overall declutter (both mentally and practically).

Minimalism and simplifying is really trendy right now. It could be that I'm influenced by that trend, but honestly I've been feeling this pull to just get quiet for a few years. (Quiet was my word for 2016!) A lot of little things have carried the same theme (books I've read, conversations with friends, and just what it feels like God has been telling me through prayer) and this summer somehow became the season to officially take steps to simplify more! Do you ever have that happen? Where everything your read or see or talk to others about seems to be related and you just realize one day that maybe God is really telling you something?

So, here's what things I'm doing to be a bit quieter these days. Maybe they'll help you too?

First, I'm trying really hard on simplifying things for myself before imposing all of of this on the boys or Justin. It only seems fair! Practically speaking, this means I'm saying no to lots of things and just all around trying to take in less.
I decided to hop off instagram for a month or two (likely until I start really working on marketing my new business in mid-July). I actually love instagram and get tons of encouragement and inspiration there. There is such thing as too much of a good thing, though, and I am looking forward to hearing from others less and hearing from God more! I'm trying to just need/use my phone less overall- which means being more disciplined about working my part-time job on the weekends and early mornings so I don't need to throughout the day. I'm decluttering our house- paring down the kids' toys, sorting through decor pieces to only keep a few things, and finally emptying out our basement from our move two years ago. It helps that we're having a garage sale next weekend, so I have a deadline to have it all out of our house! It already feels great to have less cluttered rooms.
I'm also adding in a few things! A couple times a month, I'm trying to schedule early morning coffee dates with some friends that fill me up. I've learned that big group get-togethers or play dates with kids just don't have the same accountability & encouragement effect that waking up at 5am to sit across from a friend for an hour or so really does. Add to that some consistent time spent running (I'm shooting for 2 miles twice a week and one longer run), and trying to really dive into Psalms each morning. I even checked out this and this from the library to help me not need my phone in the morning- I'm used to using the Bible app and commentary search on it when I'm studying and I am excited to truly leave my phone in another room now and not even look at it until a few hours after I wake up!

After all of that, I'm really trying to keep our days simple. Less TV (I'm thinking of telling the boys are AppleTv is 'broken' so they're stuck with PBS and will truly only want to watch one show in the morning and after naps) is a big one. It is also just naturally easier to have the TV off with summer weather. We're already spending our days in the backyard, at a local park, or our neighborhood pool. It is AMAZING how well the boys get along when we're outside. They have time to explore, feel a little bored, create play on their own, and cycle through that again. I find that they need me less and don't need any cool toys either. It's the best! Even more, I notice an attitude difference in all of us when we've spent all day outside. We're happier, less agitated, and we all (me included!) listen better.

Speaking of listening, that is the other things I'm trying to do more of right now as part of my effort to be 'quieter.' It is so easy for me to talk and share and say things I'm processing, but I really want to be a better listener. With God, friends, my family, etc. What does that look like? Less talking at God and more listening to him during all parts of my days. Taking a step back from being the initiator in lots of things to see what others really want to do/talk about, etc. And my favorite way I've been practicing listening is with the boys. Almost every night, I linger in Caleb's room after bedtime. Most days I would rather head downstairs, finally make myself supper, do some work, and just in general feel off duty after momming all.day.long. But those extra 20 minutes snuggling in his bed are amazing. He is more chatty than usual and I don't say much- which gives him a chance to let his thoughts wonder and for me to hear a different side of his sweet personality. Lately he's been doing a lot of birthday party and summer planning! I don't do the same every night with Tyler, but a few times a week I'll scoop him out of bed after he's been tucked in and we'll sit in his chair. He recounts his day with me and usually makes big plans for the next day. It's just amazing how the quiet, soft light of their rooms at the end of the makes for a perfect place for them to open up and chat freely without any prompting from me!

So yeah. Quiet, simple- however you put it- I'm shooting for a summer with less inupt and truly more space to breathe. I have a feeling it will spill over and continue into the Fall, and I'm honestly excited about that!
Posted by Katie at Thursday, May 31, 2018