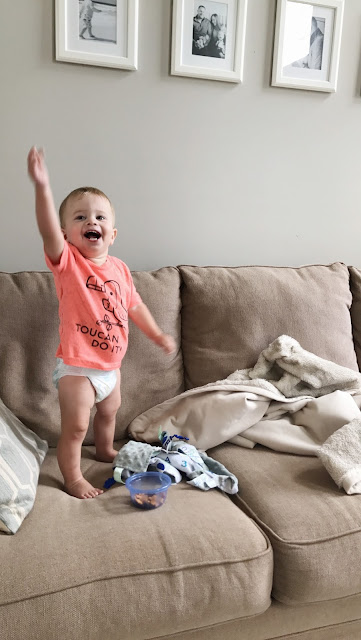 Let's chat about Tyler at 18 months. This sweet boy is equal parts fun and exhausting. He is growing so much these days, which means we can engage and have lots more fun with him. But he also has bigger opinions and all the irrationality of a toddler, too! Add in his never-ending movement and you have half a dozen falls/tumbles/accidents everyday. We are basically always on our toes when Tyler is around!

He has picked up even more words and animal sounds in the past month. He NEVER stops moving unless he's in his carseat or asleep. You probably read that and assume its a bit of an exaggeration, but you'd be wrong. I really, truly mean that he doesn't stop moving. Perhaps for a book from time to time or if he wakes up a little sad- but other than that he's on the move! It's pretty normal for him to wake up at 5:30am (for the day!) and literally hit the ground running. Oy.

His current diet consists of only crackers (any kind), yogurt, and berries. And the occasional Chick-fil-a chicken nugget. He has slowly been refusing other foods over the last few months and his great-eater status. Ah, 1.5 year olds.

He's still little! While he definitely on the growth charts finally (!!!), he is 13% for height and 34% for  weight. He's wearing mostly 18 month clothing, size 4 diapers (that big belly!), and size 3/4 shoes.  The more weight he puts on, the more he is starting to look like Caleb. Having said that, it's still safe to say he's my little mini-me. Comparing pictures of myself as a toddler with Tyler is crazy! His hair, which started out a dark brown, just keeps getting lighter. It's almost blonde these days and he's in desperate need of a haircut (if you ask me) but Justin's pretty attached to his unruly baby mullet, so it's sticking around for a bit longer!

Tyler loves his hand-me-down truck book, crackers, daddy, exploring, bath/swimming (zero concern for safety), dancing, hide and seek, his outie belly button (you'll often find him stopping and just playing with it😂), making sheep sounds, sleeping with his little lovie and Mr. Flops (stuffed bunny). He also REALLY loves Murphy- and I'm not sure the feeling is mutual anymore. He intensely loves/climbs/plays on Murphy any chance he can find.