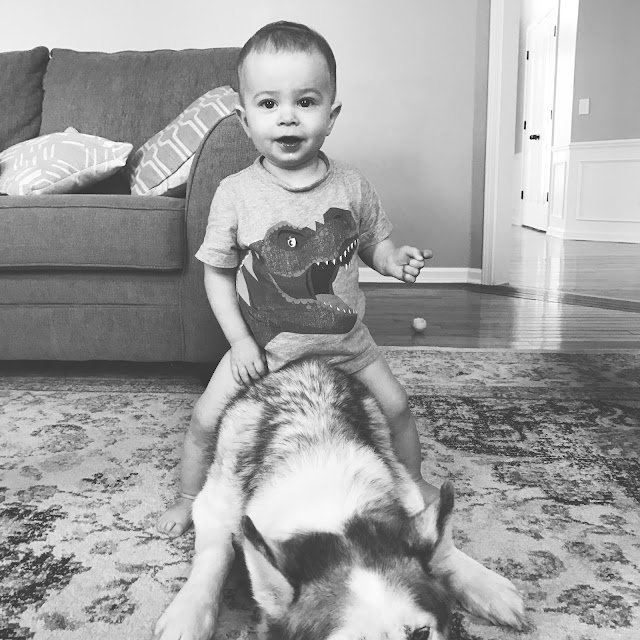 (I wrote this two months ago and never got around to posting it! It's crazy how much has already changed with Tyler since I first wrote it out. Posting it just to have this age documented😊)

It's safe to say we're out of the baby stage and life with two toddlers is WILD. Tyler is a ton of fun these days. He's been busy since the moment he was born (I probably should have known that a rapid labor/delivery meant a CRAZY kiddo) and that trait doesn't show signs of fading as he gets older. We fondly call him a 'maniac' around our house and really do mean it in the nicest way. If you're ever around him for more than 5 minutes, you would completely understand.

Tyler James Rush never sits still unless he is sleep or physically strapped in (aka highchair and carseat). I laugh at myself for thinking Caleb was a busy toddler. It's funny how siblings can be so different and those differences can be evident from birth! Tyler loves to play independently and with others. He follows us/Caleb around and tries to start a game of peekaboo 100x each day. He never sticks with one toy/activity for long and rarely sits in one spot or sits down at all (unless he falls down). Tyler started walking a week after his first birthday, was wobbly for a few weeks, and now is basically running. He was finally tall enough to climb the stairs on the exact day he turned 15 months and would prefer to do that all day, every day.

Tyler doesn't have many words (ball was his first!) but understands simple commands and says hi to nearly every stranger we see in public (whether they notice him or not). He's nearly always drowned out by Caleb's incessant talking, so its extra fun when we have one-on-one time with him. In the car (if Caleb isn't around) he will jabber non stop. He loves to say 'that!' and point at various things over and over. And he's a bit of a ham when it comes to dancing, bouncing up and down every time music comes on and giving us the biggest grin.

And, after over a year of life, our little guy is slowly climbing the growth charts! For the first time ever, his weight surpassed his height and its pretty obvious by his growing little (big!) buddha belly. We stopped nursing on his first birthday and he switched fully to whole milk. He's a fickle eater and changes his mind about what he likes EVERY single day. But his consistent favorites are blueberries, yogurt, and veggie straws. He's starting to grow out of 9 month clothes and starting to wear 12 month.  Because of his BIG belly, I think we may need to switch up to size 4 diapers. That's crazy, since he was still in size 2 in December! He always has tiny feet (like Caleb) and we just ditched his infant 3 month shoes and have one pair of size 2's that only fall off half the time.

Tyler's favorite toys are balls, anything he can ride on, touch and feel books, cups/bowls and spoons that he pretends to eat/drink and feed us from, and Murphy. He loves Murphy and we daily find him laying across Murphy's belly. He's learned he can pull clumps of fur off at a time now that Murph is shedding his winter coat, so that's fun. Tyler's favorite person is me and he developed a bit of stranger danger suddenly right after he turned one (before that he truly would happily go to anyone!). He thinks Justin and Caleb are the funniest people in the world, and seems to forget that Caleb pushes/takes toys/sits on him and makes him cry a dozen time each day.

At 15 months, Tyler still really loves his pacifier and we're thinking of breaking him of it really soon (it seemed silly to overlap it with Caleb's potty training because why make THAT much more work for ourselves?). He LOVES his lovies (small blankets he sleeps/snuggles with) and sleeps with both his paci and a lovey at night. After two ear infections, never ending teething, hand foot and mouth disease, a handful of bad colds, and the flu- we got into a bad habit of giving him his pacifier (it inevitably gets lost in his crib) if he wakes up at night. So it looks like this will be the month of ditching the pacifiers for good and helping him re-learn to sleep through the night if he wakes up!

Overall, Tyler is a FUN kid. He laughs so easily and often. He goes HARD during the days and keeps us really busy and on our toes. If anyone wants help childproofing their home, just borrow Tyler. He has a knack for immediately identifying things you never thought a toddler would notice. It's a ton of fun watching him and Caleb begin to interact more and more. At the same time, it's crazy to feel a real sense of the baby days ending. Tyler is slowly dropping his morning nap (I think daylight savings will be the final kick he needs) and that means we just operate less and less like we have a baby. He eats what we eat, will get a big carseat soon, interacts, communicates, and needs less nurturing. Such a fun age!