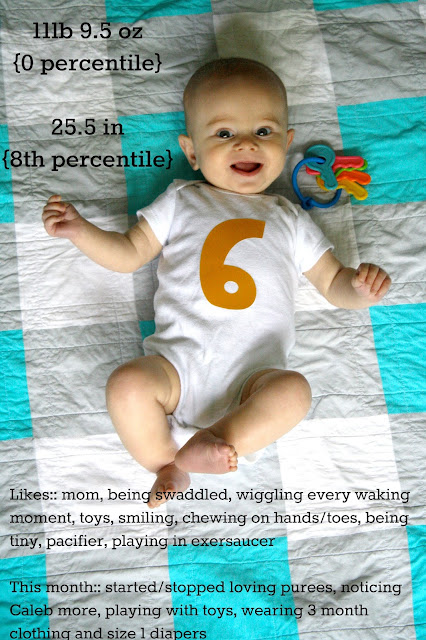 Perhaps my new normal is to be an entire month behind on these? :D In my defense, I actually took the photos on time this month! 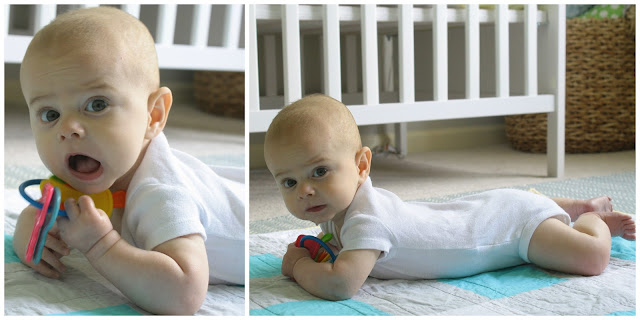 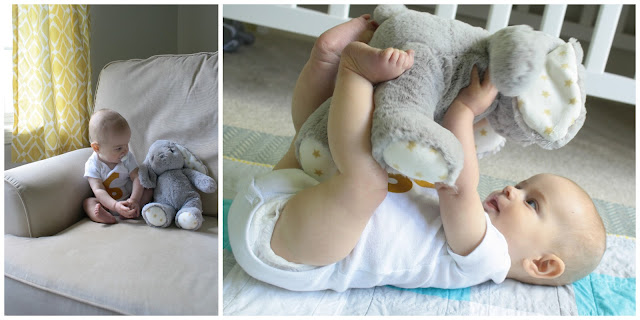 Oh man. How is it even possible that Tyler is half a year old already?? It seems extra hard to believe because he is still the size of a small 2-3 month old! Lengthwise, he's edging out of most 3 month sleepers. But he is still so tiny in the weight department.
In fact, we found out at his 6 month appt that he only gained 9oz in the last two months. So, a bit concerning! We're going to try a few things to get his weight up and do some weight checks before we look to blood tests in July. He is actually a great eater and nurses/takes a bottle really well. So hopefully there isn't a huge issue and he is just a tiny guy! Its hard not to be worried or overthink it or compare him to every other baby we see- but we know he's his own little person and God really is in every detail of his life, even this one.
Oddly enough, Tyler started and then stopped loving solids this month. He was all about them for two weeks. Then he came down with a 24-hour stomach bug (the saddest thing ever) and since then has just refused any purees or solids at all. Which extra stinks because he truly needs to pack on some pounds right now! We'll keep trying, but since he is so little and not very sturdy- it's difficult for him to sit in the bumbo or high chair and support himself enough to be interested in eating or finger foods.
We moved back to the swaddle this month and found our napping sanity! I have a hunch that it's going to be short lived, though, because this kid is BUSY and never stops moving. He rolls everywhere, but not in his crib. Yet!
We are getting more and more giggles these days and it is just so much fun. Caleb didn't laugh much for us, so we sort of feel like the funniest people in the world to Tyler. He is so flexible and let's us stay busy and sort of do what's best for Caleb each day. He has a general schedule (eating every 3 hours, awake for 1-2 hours, naps for 1-2 hours), but we only loosely stick to it because #secondchildproblems. He usually takes his morning nap in the stroller or on the go since we do something each morning. Most days I can squeeze a really good afternoon nap from him when Caleb naps, and it's awesome. He has gotten back into the swing of naps and night sleep and we all love it. Too bad the biggest thing we're going to try to help him gain weight is waking him up every 2-3 hours to eat!
What else about Tyler at 6 months? He loves his exersaucer, is starting to play with more toys, loves watching Caleb, loves to be swaddled, wiggles SO much, isn't interested in solids, wakes up with the biggest smiles, wears 3 month clothes, still in size 1 diapers, and loves his pacifier. He has tried sweet potatoes, avocado, pears, peas, oatmeal, apples, bananas, and prunes- but doesn't seem to love any of them right now. He can't sit up on his own at all- the downside of being the size of a 2 month old! So we're working on that a lot these days.
Tyler is SO wiggly. He can roll both way, but right now he mostly just kicks himself into a frenzy and ends up moving around on the floor just from kicking so much. It seems impossible that he'll be a late crawler like Caleb!
Oh! I keep forgetting to write this down each month. Tyler lost a good amount of his hair in the first few months, but it's grown back in now. It's still brown, but a little lighter than when he was born. His eyes though! They were cloudy and blue when he was born and we still quite figure out what color they're going to be. They definitely aren't blue (like Caleb's and Justin's) or brown (like mine)- they are more of a green/brown combination? They seem to change with what he's wearing and look a littler different every day! By now, it seems to be the general consensus that Tyler looks most like me- nearly everyone says he's my mini-me. It's hard for me to see, especially because some days he looks so much like Caleb did when he was a little baby! 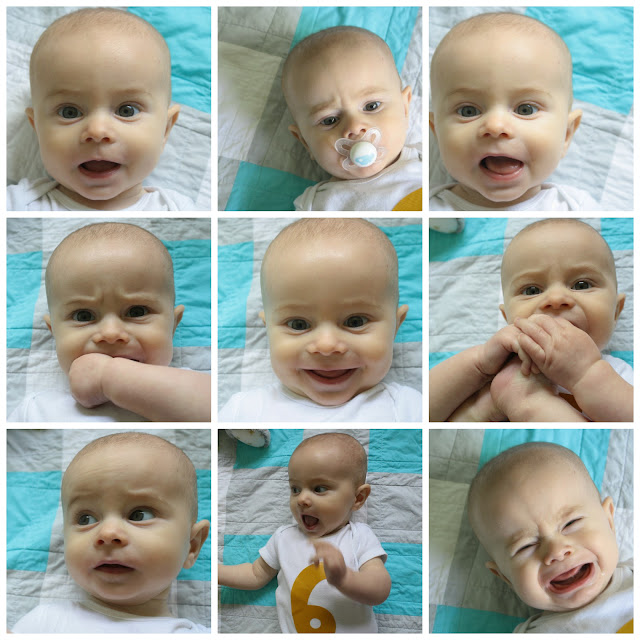 New this month// started purees, back to swaddling for sleep, loves Caleb, plays with toys (Mortimer the Moose and his crinkly elephant are current favorites), still in 3 month clothes, loves his pacifier all the time.
SaveSaveSaveSave
Posted by Katie at Tuesday, June 28, 2016