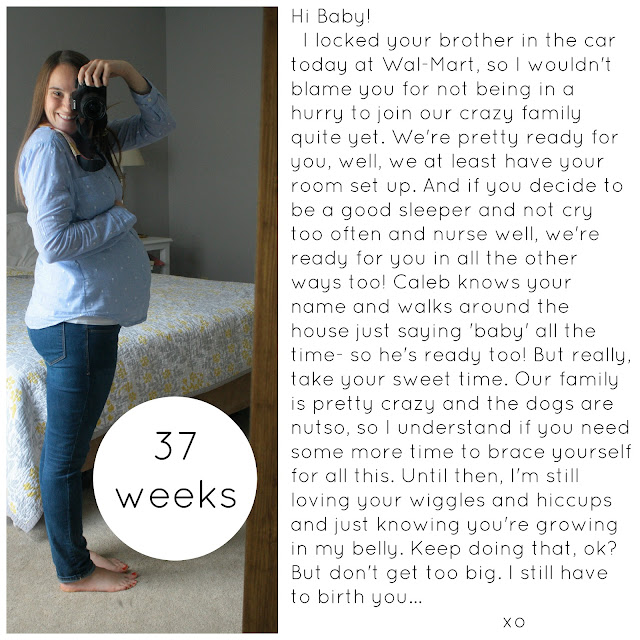 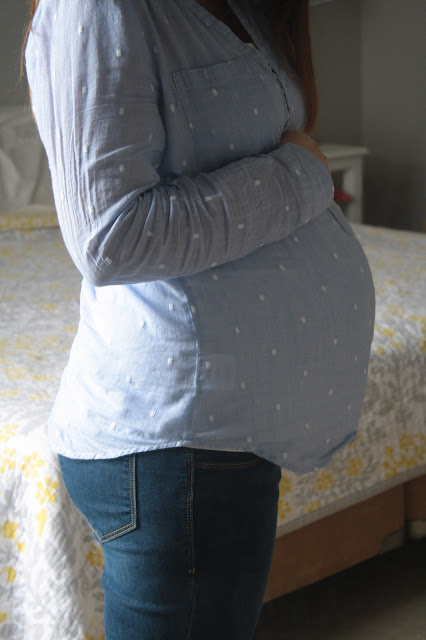 This is officially the longest I've ever been pregnant! Ha. Isn't that ridiculous? I'm technically not even full-term {I think I would be considered early term?}. Since this is still a really normal amount of time to carry a baby and I'm not even really close to my due date, I think it is bananas that I've been carrying this kiddo longer than I did Caleb. He was born at 37 weeks to the hour. But here we are! I'm still fully prepping myself to go a bit late and I'm feeling great about it.

When we found out we were having a December baby, I was pretty bummed. I just dislike the idea of this kiddo having his birthday clumped with Christmas every year. While I still think that stinks and will probably try hard every year to avoid that very thing, now I'm loving the thought of a newborn during this holiday season. It's somehow making the holiday season so much fun and magical for me this year!
On a more serious note? I learned that another sweet friend lost her baby last week. Of all the tragic things in life, I still hold to the thought that losing a baby or child is the worst. The most unnatural. It's not ok and I don't know how you heal from that, except for the grace of God. Life is so so bittersweet. A few weeks ago, I caught myself choking back a few tears as I watched Caleb poke and touch and scream excitedly at a friend's new little boy- it was so sweet to see our boys together. We had been talking about and dreaming of these days since college. But it was also really really bitter that there was one boy missing. All because his life was taken before it even really started. We'll always look at our boys together and know that the oldest was tragically taken too soon. It will probably sting less over time, as those things go. I've stopped trying to make meaning out of hard things in life, because things like a baby dying just aren't supposed to make sense on this side of heaven. Instead I'll keep choosing joy and celebrating with friends who find themselves in seasons of celebration and grieving with friends who have lost babies or marriages or seem to be waiting forever for their family to grow or to find healing for whatever really hard thing has been thrown their way. We just can't avoid either part- the bitterness or the sweetness of life- so we have to learn how to do them both together, right?
On that really heavy note, I should probably end this post with some fun things! I'm to the super glamorous stage where my ankles swell like crazy if I stand for too long and I regularly forget how big my belly is until I try to bend and remember a literal human is blocking me from doing so. BUT! I can still paint my toes, put my shoes on, and shave my legs. So that's a win? And while I have a serious resolve to walk a lot in the next few weeks {I did a 5k the night before my water broke with Caleb}, I've also officially decided I'm in no hurry for this little guy to be born. I love these days with just Caleb and know that babies have a mind of their own, so come whenever you want little guy!
Posted by Katie at Monday, November 23, 2015