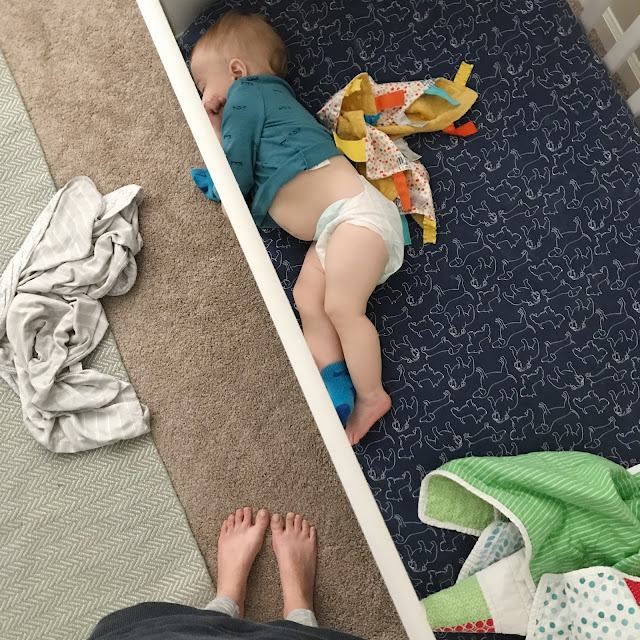 I've decided that my kids will never stop teaching me lessons about life and myself. Raising small humans is funny that way- sort of a little mirror walking around your home reflecting back all the great and not so great parts of yourself, along with things you had never noticed before. And even though I'm sure I had heard that before having kids, it never really sank in until it I experienced it.

With a nearly 3 year old and  1 1/2 year old, I am in what I think seasoned moms call 'the thick of it.' I know that seems to have a negative tone it it, but I don't know that anyone means it to. I love these years. The boys are growing more every day (physically and developmentally!) and it feels like one big adventure.

Lately, I've been thinking a lot about where the boys are developmentally. They seem to hit a new 'stage' of development every few months and, most often, each new stage sort of takes me by surprise or causes me to stop and think. Sometimes out of amazement or amusement, and sometimes out of exasperation, if I'm honest. Because I've decided that with each new stage comes five really fun/cool/exciting things and at least one hard/challenging/patience-testing thing. I'm coining it the five and one rule of thumb- and remembering it is essential for me to thrive (not just survive) at being a mom and loving my kids well.

Its pretty common sense, but the five and one rule of thumb only hit me these past couple of months. And it probably is a result of more intentional prayer and reflection for the boys over the last year. While I'm only just realizing it, I can see now that it has been the case since newborn days. Or really, since pregnancy.

My pregnancies were each marked by amazement at the miracle of life and how God created our bodies to carry babies, excitement to meet my sons, fun planning and dreaming, etc. And also came with pretty legit anxiety/worry/concern/unsureness about what was to come. Then, the newborn stage was so full of sweet snuggles and gassy grins and trying on cute outfits and feeling so fulfilled with a new little life. There was also tiredness or soreness or feeling lost on how to soothe this new strange baby. And so on and so on as the boys have grown over the last few years.

Anyways, I think this aha! moment and realization that every stage has a handful of great parts along with a more challenging part is so big for me because it gives me perspective. Some days, I only see or acknowledge the hard parts. And not because I'm a negative nancy, but because the hard parts can be really really hard. Having a baby who never naps or a kid who isn't growing or a kid who bites at school, whatever. Sometimes its just easier for those parts to stick with us and cause us to miss the good stuff.

Caleb spent the better part of Fall working on learning to express his emotions (he feels things intensely) and I spent a ton of time worried/embarrassed/frustrated about it. Honestly, I spent more time focused on that one issue than I did enjoying his newfound imagination or the bright side of his intense emotions- he loves others passionately and gets so excited about things he loves. I missed a lot of those good parts of the stage he was in because I let the challenging parts overwhelm me.

In general, the age 1.5-2 is crazy for me. Lots of learning and feeling and developing opinions and little ability to express those. Tyler is smack dab in the middle of that stage. The kid has a strong will and a curious mind! I'm tempted, every single day, to just be exhausted and tested by him. He never stops moving and has really, really strong opinions about things right now. But the five and one rule of thumb points me back to the best parts of this stage- his curiosity, his sense of adventure, his lack of fear or anxiety, his growing understanding of his opinions, and his independence growing. Those are really, really cool things that I have the sweet gift of watching literally develop in front of me everyday and I want to make sure I don't miss them!

So, hold me to. When my boys are teenagers and I'm undoubtedly worried or stressed or frustrated about a certain stage they're in, remind me that for that one thing (even though it feels huge!) there are probably five awesome things going on with them. I don't want to miss those! And isn't the same true for us as adults? Every season of life comes with good and bad. Sometimes its reversed and there are five challenging things, but still one good thing. Either way, I don't want to lose sight of the good. Of the sweetness, because each season has even a small bit!