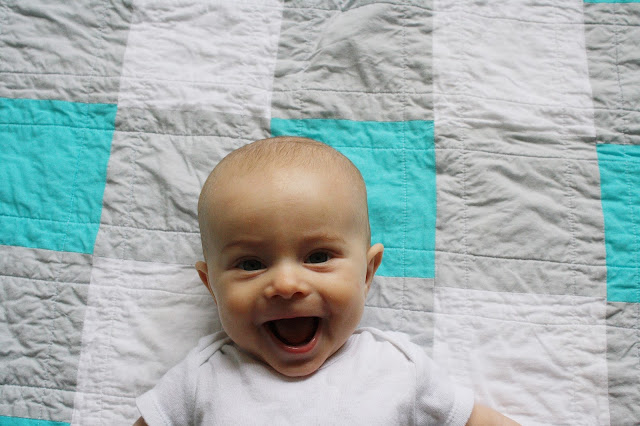 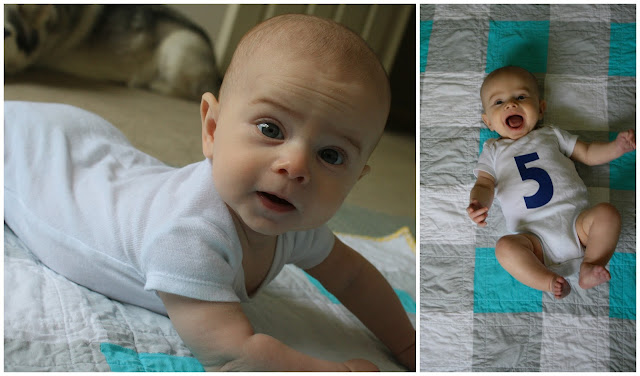 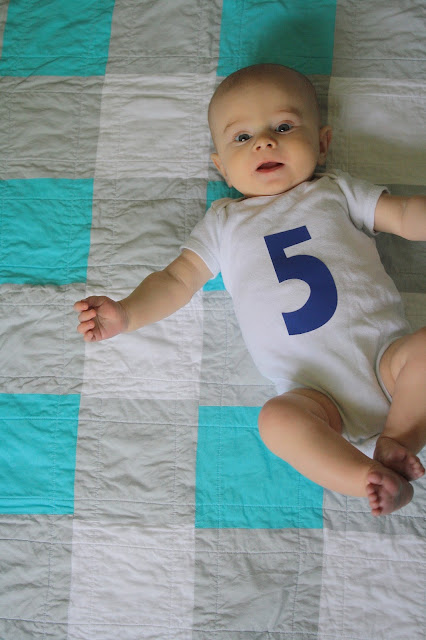 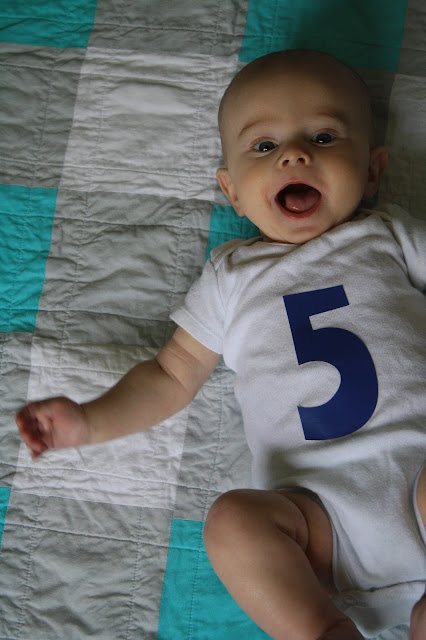 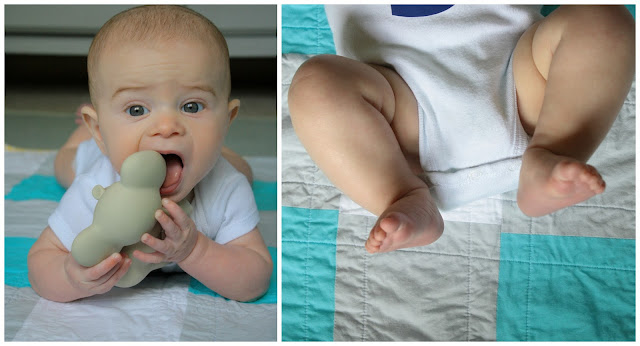 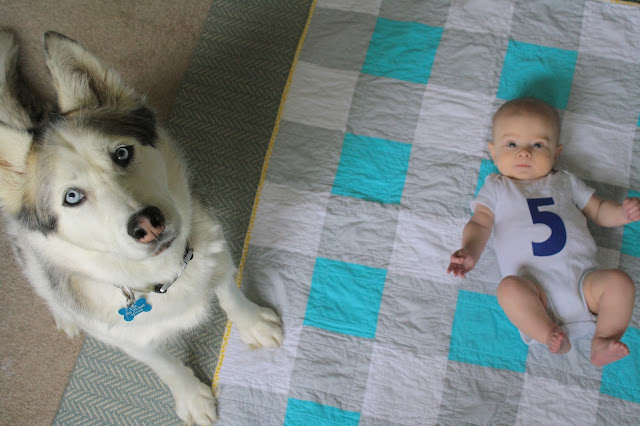 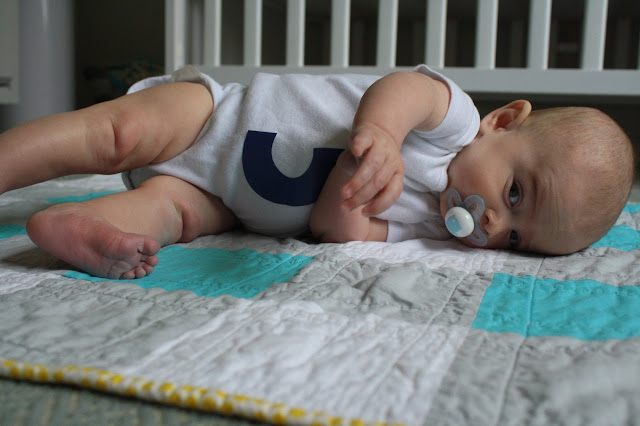 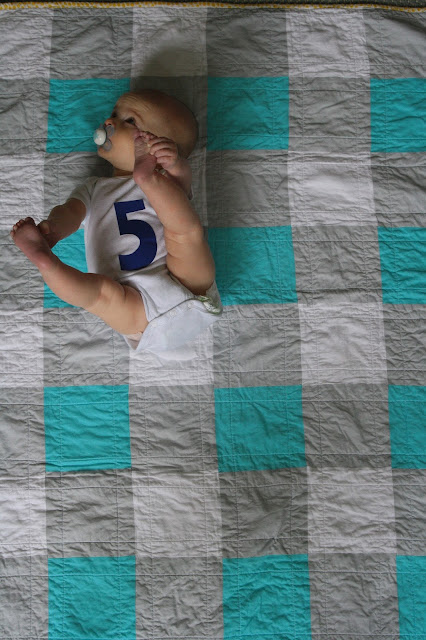 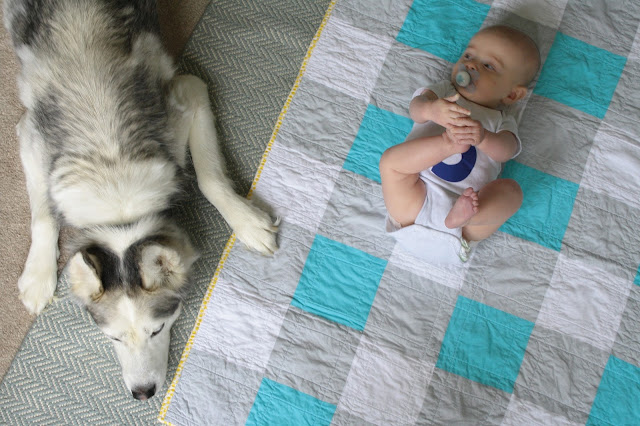 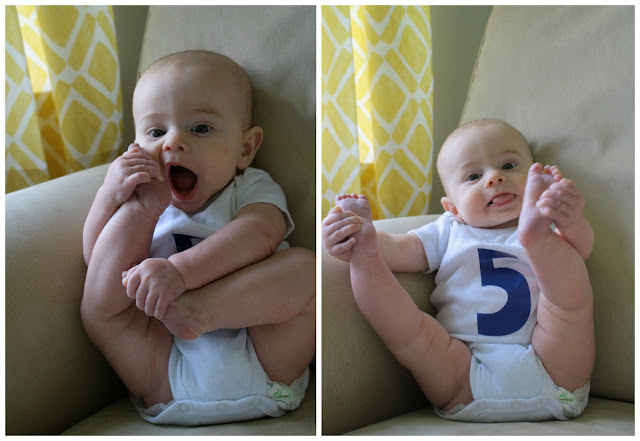 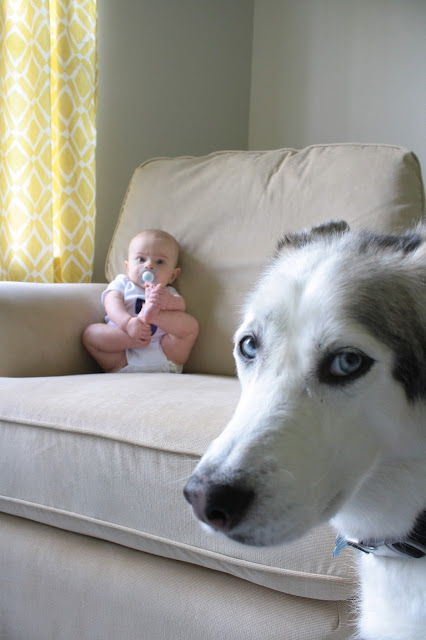 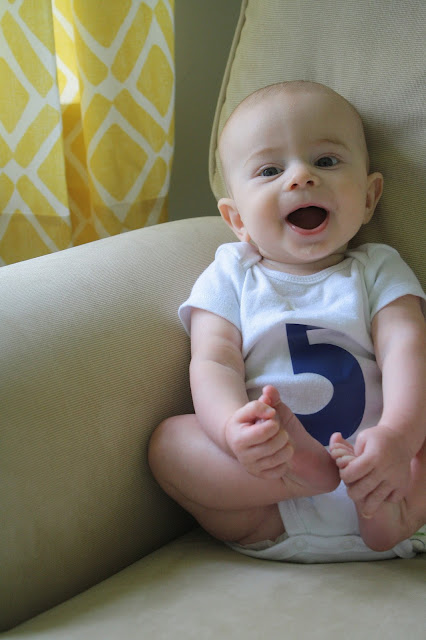 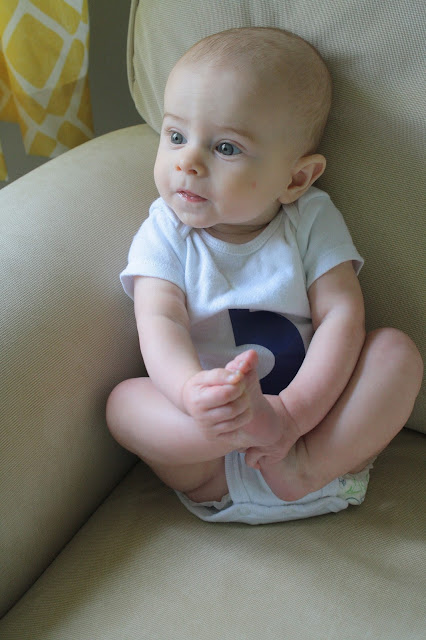 I've decided to not even let myself feel guilty about missing Tyler's four month update and being late with his five month (but I took the photos on time!!). Life goes on, right? :)

I have so many things I want to document about Tyler at five months. Most notably, he is our little peanut. At his appointment last month, he was just a hair above 11lbs and less than 1% on the growth scales. (To put that in perspective, Caleb was really tiny as a baby too, but was bigger at 2 months than Tyler was a 4 months!) I went into that four month appointment knowing Tyler was tiny and worrying about what the doctor would say BUT she was so happy with his growth. He's on his own little curve and is probably just going to be a smaller guy (unlike his brother and dad!). She gave us the green light to start solids and gently reminded me that since Tyler is the size of a 1-2 month old, I need to give him (and myself!) some grace and lower my expectations for sleeping and schedules.

Despite his really, really tiny size (still in size 1 diapers and 0-3 month clothes)- Tyler is developing like crazy. He started rolling back to belly and laughing right at 3 months (!!!). He loves toys now and can bring them to his mouth and pass them from one hand to another easily. We started solids around 4.5 months (oatmel + breastmilk) and he was indifferent. I think its a combination of the soupy-ness of the oatmeal and still being a bit wobbly since he is so tiny (not quite sturdy enough for his bumbo).  This month we're moving on to real foods and hoping he gains a bit of weight!

On a real note, at this age Tyler gives me a run for my money some days. His older brother was such a breeze. Caleb was already on a 4 hour schedule at this age, taking 2 two hour naps each day and nursing every four hours. Ha! Tyler needs to nurse every 2-3 hours still (the dr said that is really normal for a kiddo his size) and just doesn't sleep as soundly as I'd like (I realize how silly that sounds!). I feed him around 7pm and then again around 5:30am (sometimes he can stretch it out until 7am). But he wakes up a handful of times at night and can't get himself back to sleep without his pacifier. I'd love to break him of those quick paci drops, as we call them, but he just isn't able to do it yet. And naps. Oh naps. He was an amazing napper from the beginning, until we had to ditch the swaddle at 3 months when he learned to roll to his belly. Since then, we're lucky if we get a 45 minute crib nap at all each day. Sometimes he treats me to an hour long one, but I don't hold my breath. He always takes his morning nap on the go, since we're out and about every day. So that's good! But still. NAP IN YOUR BED, CHILD. Some days I'm super motivated to figure it out and break his code and have him be an amazing napper. I've literally tried everything (thanks in advance for any advice you have!). But most days I just try remember that this phase really is short. He will nap. He will stop needing his pacifier at night. He will gain weight. He will grow at just the rate he's supposed to!
It's just funny because I was really relaxed with Caleb. Partly because he was just an easy baby and that let me be relaxed. But also because I just didn't have another kiddos to think of. With Tyler, I find myself second guessing things and feeling like he just hates me some day or that I can't figure him out. Having an almost 2 year old helps a ton with that. Caleb is fine. Better than fine! So all of this little things about babyhood that could easily consume my thoughts or worry they heck out of me will work out just fine.

Ok. Enough with the little quirks. At this age, Tyler is SO fun. He found his toes this month while we were on vacation and loves to chew on them! His smile is still so big and takes up his entire face. He laughs really easily and is just really happy when he's happy. It's fun to see him discovering new things and starting to play with his toys and interact with us more and more these days! He has found his love for Sophie and chews on his crinkly elephant toy for as long as we'll let him. He also LOVES the toys on his activity mat (when I remember to get it out and set him on it).

Caleb still loves Tyler a ton and tries to help out more and more. He doesn't love that Tyler plays with some of his toys and conveniently has a newfound love for all the baby toys he hasn't touched in months. But he gets so excited to help me wake Tyler up for the day or from his naps and loves to hold him or lay down next to him. 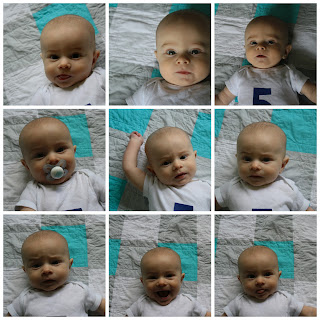 LOVE the toe pictures. Amelia is also in the feet grabbing stage, especially during diaper changes. Keep giving yourself the grace to recognize the differences between your two fellas and embrace what you can. You're doing great and I appreciate your perspective! -gh