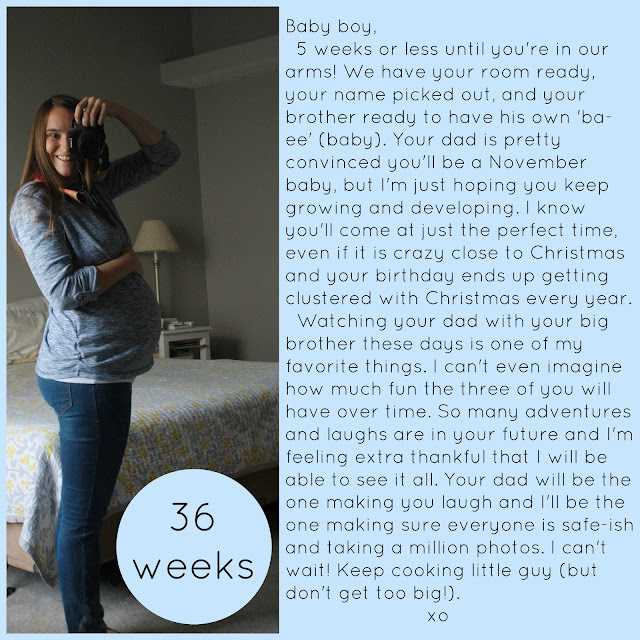 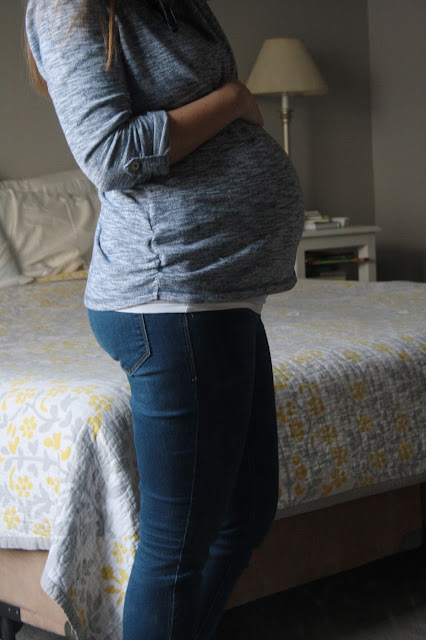 It is crazy to think that if this pregnancy is anything like my last, I could be meeting this little boy in ONE WEEK (!!!!). What??
We are actually really prepared for this little guy. His nursery is all set up, which wasn't the case with Caleb. We already have the pack n play upstairs for naps and the MamaRoo together and the carseat base in the car- having a baby visit us last week gave us an excuse to get it all ready. But despite being tangibly more ready for this kid, I think that I'm feeling less prepared. I didn't have any anxiety or fears about having my first baby and Caleb ended up being so easy. No sleepless nights or endless crying or any real 'newborn fog'. It was just really easy to transition to life with a newborn, and I know so much of that was luck of the draw. Two under two though? I think I'm feeling a little frazzled about it. I have no idea what to expect! What are the chances we'll end up with such an easy baby again? And now I have to split my time between a very busy toddler and a newborn, so those long days of snuggling and Netflix marathons and plenty of time to cook and clean just won't exist. Which is ok! But phew. I'm starting to realize that these next couple of months may just be super crazy for me. Women have been doing it for hundreds of years though, right? I think that's what is keeping me from freaking out- knowing that I'm not the first or last to have two kids under two. Also, I just don't care if my house gets cleaned or I am able to shower every day. If both kids are fed, changed, and rested- I will call each day a success!
Gah. Did that sound like word vomit? I guess I'm feeling super honest today. And if I'm being honest, I'm also super excited. At nearly 1 1/2, Caleb is a ton of fun. I can confidently say that I love him more today than when he was born. Which makes the thought of having a new little person that much more exciting. My heart can grow and it will! I will be so smitten with him at first, but even more so as time goes on. Knowing I have to capacity to love and to love deeper over time, that just makes being a mom awesome, you know?
We refer to this baby by name all the time, which we never did with Caleb. I was so worried Justin would change his mind and I'd have to unattach myself to his name, but this time around it just feels natural and we sort of settled on his name unexpectedly. Caleb knows where the baby's room is and says baby all of the time. He is fascinated by babies and tries to be really gentle with them. Which is adorable and hilarious at the same time.
In other, less interesting news- I'm still feeling great pregnancy-wise. I was worried since I got big so fast that I would end up being miserable. But really, I hardly feel pregnant and have lots of energy still {until 8pm. Don't try to get me to do anything after that}. I'm waking up every day between 3-5am, just like last time. My belly button hasn't popped out {it never did last time}, and my varicose vein is INTENSE. My ankles and feet swell if I stand too long. So funny that those things were the exact same last time around. Our bodies are fascinating! Oh, and I bought some maxi pads and painted my toes this weekend. So basically, I'm all set to birth this baby!

Phew! This is the official homestretch of meeting our newest baby boy. 35 weeks today and my dr has started me on weekly appointments since I went early with Caleb. How crazy is it that with C was only 2 weeks (to the HOUR) away from meeting him at this point?? Gah. I can't imagine this guy coming in two weeks and am still mentally prepping for him to come late.
I'm also feeling so much less overwhelmed about our to-do list. My parents so graciously took Caleb overnight Friday  and ALL day Saturday, which gave Justin and me tons of time to just get stuff done. We deep cleaned our bedroom (thing HUGE closet purging) and garage, hung the last nursery things, baby proofed some cabinets, and finished a billion loads of laundry. We were even able to sneak in a free date night on Friday (gotta love gift cards!) which was all sorts of amazing. And just like that, we are far more prepared for this baby than we were when Caleb arrived!
I'm sort of in love with this baby's nursery. I need to drum up a few more pieces to put on his shelves, but I'm in no hurry for those. We moved the glider from Caleb's room to the nursery over the weekend and I just can't even imagine the hours I'll log nursing or feeding this little guy. And how different it will be this time around!
Let's talk about that. Caleb was pretty sick last week and I had a few moments of 'holy crap. Why did I ever think it was a good idea to have two under two??". Caleb's newborn days were slow and quiet and simple and I just know that it can't be the same with this one. Our days will be a bit more hectic, since there's a toddler running around. I'm already giving myself lots of grace and letting go of any expectations- it won't be the same as it was with my first baby. And that's ok. Remind me of that when I inevitably feel overwhelmed or guilty in those first few weeks!

Will this be the month we meet this little guy? Or will he come late? The suspense is killing me. Justin is confident he'll come early, just like Caleb. I'm just mentally preparing to be induced on December 19th and letting anything that happens before that be a complete surprise! I never got to a point in my last pregnancy that I was just done with being pregnant and feeling miserable, so I want to try to keep it that way this time too. Just easier for everyone, right?
So. The nursery. It would be done by now, except that on Saturday I decided (while Justin was golfing and Caleb had 20 minutes left in his nap left) to start painting it. Really smart, right? Currently, 1/5 of it has one coat and that's as far as I've gotten. I had no plans to paint it because it's such a neutral off white/beige-y color that has been there since we moved in. And then we put the white crib and gray dresser and yellow curtains and it just started looking peach-y to me. Gross. And I happened to still have some paint leftover from our bathroom makeover and all the paint supplies I needed...so I started painting. Stay tuned! It has to be finished eventually, right?
We've had a little glimpse into what nights with a newborn will look like again. {Isn't it crazy how you sort of forget those things?} Caleb's been really sick since Saturday night and has been up off and on all night fighting his fever. So sad, but great practice for me sleeping on edge and functioning on little sleep!
Posted by Katie at Monday, November 16, 2015