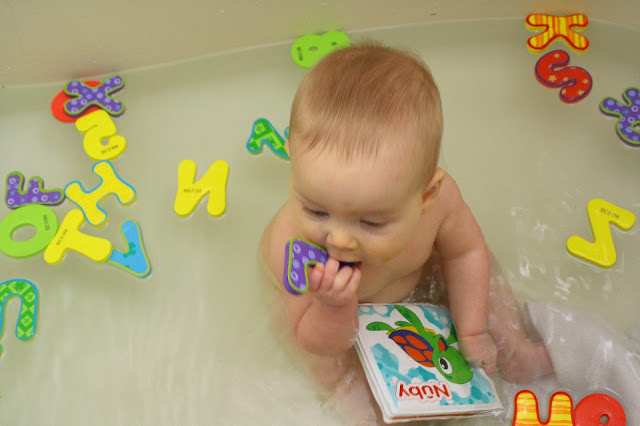 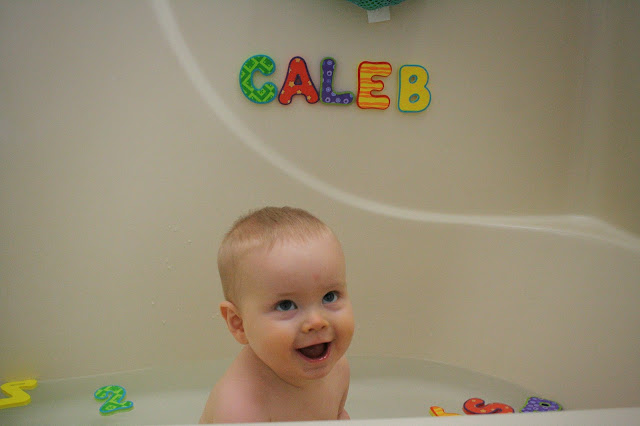 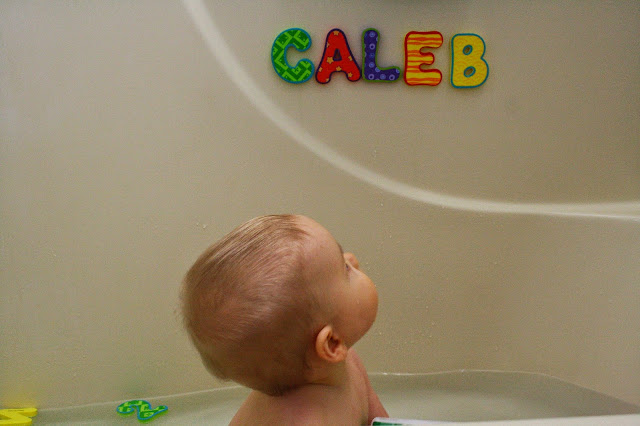 At 11 months old, Caleb is seeming more and more like a little boy and so much less like a baby. And its just a lot of fun to watch. He plays with toys {instead of just shaking or banging them} and turns pages of books. He laughs and smiles and chatters to us. He eats at the table with us and just seems to be more a part of everything we're doing instead of just being along for the ride. I love this stage. And I know I've said that about every stage so far. Sue me.
Bath time has become one of our favorite things lately. Caleb is in love with the water and will happily lay and splash around on his back while trying to 'swim' from end of the tub to the other. He's also obsessed with toys in the tub, especially these foam letters and numbers {you can snag some at Meijer!}. I'm forever spelling his name with them and pointing it out to him in hopes that he turns out to be some sort of baby genius. Too much? A mom can hope! {for the record, his dad is only hoping he turns out to be some sort of sports prodigy...}
Another favorite right now? Moving! Caleb is not crawling, but I swear he is THIS close. We thought he'd crawl for my mom last weekend while we were out of town for four days, but he sweetly held off for us. Either way, he all the sudden became interested in moving a few weeks ago and has not stopped. He can't crawl, but he can definitely get to whatever he wants in his own creative way {rolling, launching himself forward, spinning in circles, etc}. It's just so crazy because he was 100% content to sit or stand in one place and then woke up one morning with this new interest. A fun side effect is that he misses about one nap a day now because he'd rather practice rolling and scooting around in his crib for an hour.
Soon we'll have a one year old, so I'm soaking in these last few short weeks of having a baby. I have no idea how a whole year has almost past, but it has been so fun. And strangely, I'm not sad. I'm not in a hurry for Caleb to grow up or hit new milestones; I have a new resolve for just enjoying him right now, whatever stage he's in. But seriously, a one year old? How is that even possible???