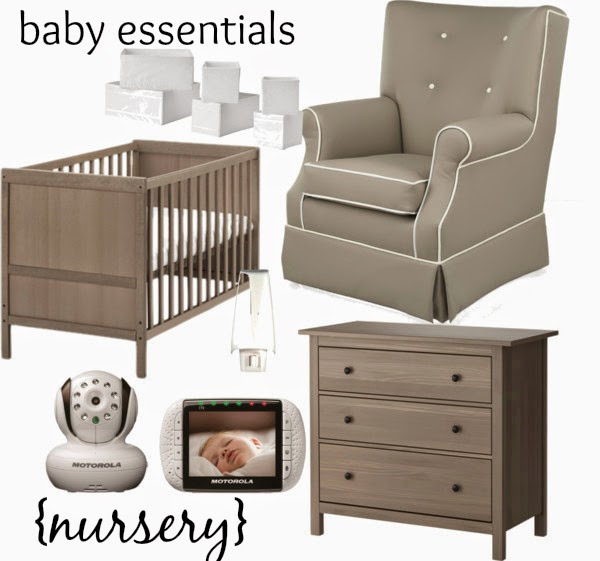 You've just been dying to dive in and hear about my baby must-haves, right? Ha. But for the three of you that care...here we go!
When we were setting up Caleb's room in our house, I heard a million times that we'd probably never use it for the first six months or so. I think that's true for a lot of {most?} families! But that wasn't the case for us. Here's where I should say that I knew, before he even arrived, that we wanted Caleb to sleep in his own room from the beginning. Before I get a million hate emails about being a terrible mom, let me say I had my reasons! First of all, it's safe, which is most important. Our dogs also sleep in our room, Justin went back to work quickly, we don't live in a mansion and its about 10 steps to his nursery from ours, and I just wanted to keep our room a place for the two of us. See? Reasons! Having said that, I know that you should never say never, so I was open to the possibility that new-mom me would change my mind. Thankfully, that didn't happen!
So, I knew from the beginning we'd use the nursery a ton. Caleb slept in his crib from his first night home from the hospital. And it quickly became a really important space in our house. Obviously there are a lot of things that go into a nursery, but I'm just sharing my 5 essentials {and one splurge!}. We of course have a changing pad and hangers and crib sheets and blah blah blah- but I don't have any real favorites of those things.

furniture:: I'm not a fancy person and we don't have fancy taste and we definitely do not have a champagne budget. Maybe you're the same? If so, this basic crib and dresser from Ikea is perfect! The crib is only $119 {and meets ALL safety standards, what else do you need?} and the dresser only $149 = $270 TOTAL!!! We just put a changing pad on top of the dresser to make it a changing table and it works- that seems to be the trend these days. Bonus:: they were both crazy easy to put together and will grow with him as he gets older!

diaper pail:: I know the Diaper Genie is to go-to diaper pail, but we love our Ubbi

. It's pricier for sure, but makes up for it ten-fold. First, it's made of powder-coated steel, which is just a fancy way of saying it DOESN'T RETAIN THE POOP SMELL! Second, you can use regular kitchen trash bags. Super convenient, cheaper, and again, holds in the stink better. Third, {and my favorite!}, it can be used as a regular trashcan once the diaper days are over.

:: Honestly, I don't remember if this is the brand we have? Before Caleb was sleeping through the night, I would nurse him in his room. His lamp and overhead light were way too bright, so for awhile I would turn on the hall light and leave his door cracked so I could see around but not enough to wake him up fully. And then, {I'm really slow about these things} I finally realized I could just put a nightlight in! There's an outlet right by the glider and on a wall adjacent to the crib, so it doesn't bother him while he's sleeping but is perfect if we need to go in his room at night without waking him.

:: Ok, so we've only one monitor. But we love it, so that means something right? I wanted an audio monitor {cheaper!} and Justin voted video; we had extra gift cards so we splurged on the video. Since Caleb was in his own room from the beginning, it was nice to have the video to peek in on him. For the first couple of weeks I think we even slept with the volume on High and the screen on {silly first time parents!}. Now, we keep the volume super low and the screen off unless we need to see what he's up to. We have this motorola monitor

and it has great quality, shows the room temperature, and works all around our house. Bonus: we can add another camera for kid #2 some day.

drawer organizers:: I'm somewhat obsessed with these cheap and awesome Ikea Skubb drawer organizers. They're perfect for all those baby-sized things. And only $7.99/set of 6. In fact, remind me to pick up a couple more sets on my next Ikea trip, mkay?

glider:: Ok, so this is a splurge and not really an essential. Because of some royal screw-ups by Buy Buy Baby {that they never really made up for}, we didn't get our chair until Caleb was two months old. And we didn't die without having a rocking chair until then. Once it did arrive, though, it was awesome! The model we bought {it was a really generous Mother's day gift for me} rocks, glides, and my favorite-reclines! It's so comfy and perfect for nursing, reading bedtime stories, and hanging out in. It's definitely not in everyone's budget, but if you can swing it {or pool some giftcards! and use a coupon! We did both}, totally worth it. Bonus:: our's really just looks like a plush recliner, so we can easily transition into a family room when the baby days are over. {notice a theme with my purchases?}