I think I mentioned a while back that I have really gotten into Project Life since Caleb was born. I love love love it. And I've been wanting to do a 'day in the life' page for awhile now. So, that's what I set out to do last Friday. I was able to document about half of our day, so I'll take it. We got busy after swim class and then left Caleb with a sitter to head out for a work Christmas party. In hindsight, it probably wasn't the best day to try to capture. So consider this attempt one! After the Christmas crazies settle down, I'll attempt another day in the life documentation! 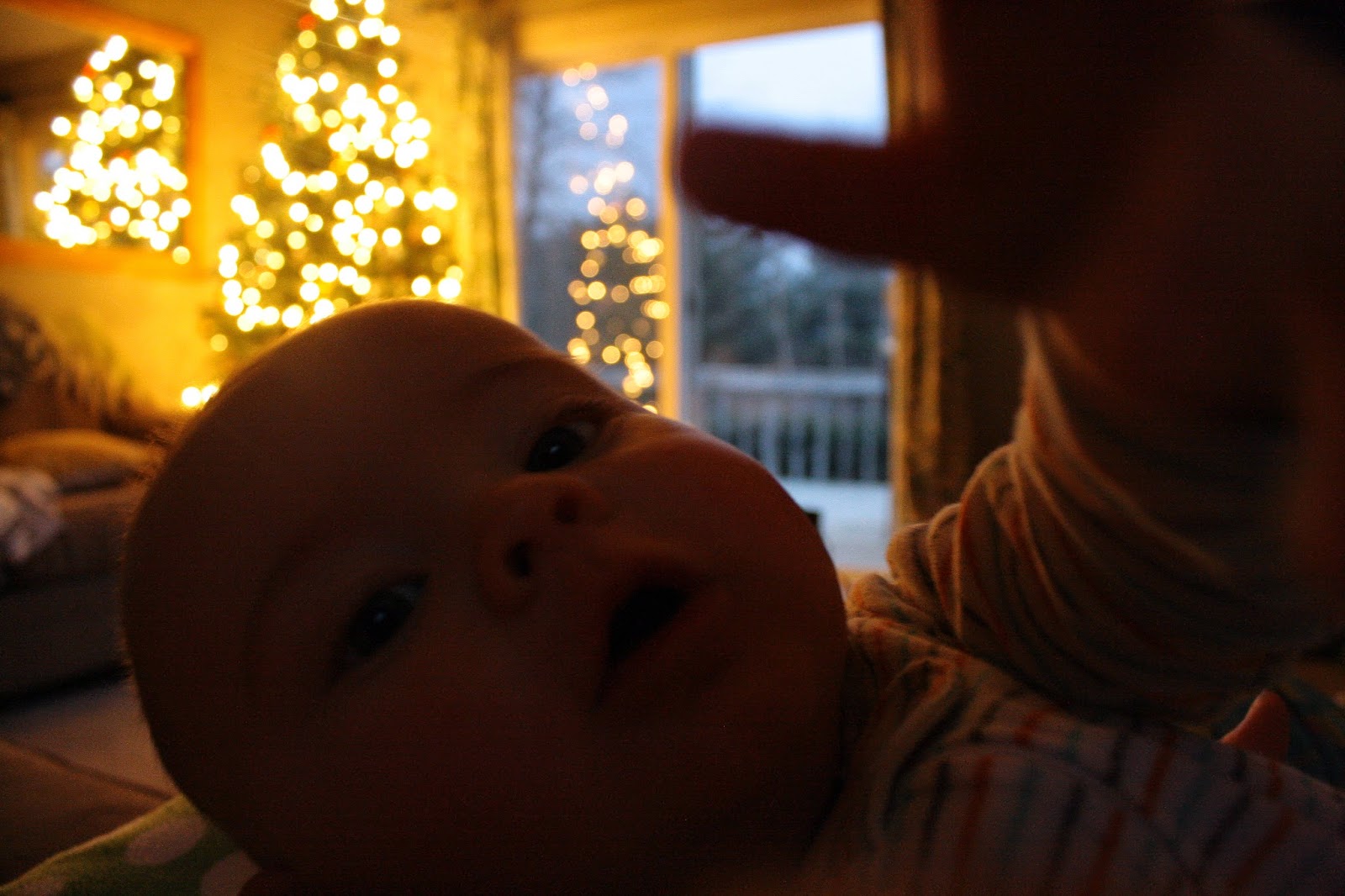 6:30am
I set my alarm every morning to wake up before Caleb and pump. How exciting! And you're welcome for not taking a photo of that. I guess I don't really need to pump, since I'm home with Caleb all the time. But I have quite the freezer stash now, so that's good. Caleb usually starts stirring around 7ish, and this day Justin was still around so he grabbed Caleb from his crib while I finished pumping and labeling and popping the milk in the freezer. The I fed Caleb! {I feel like a cow in the mornings.} 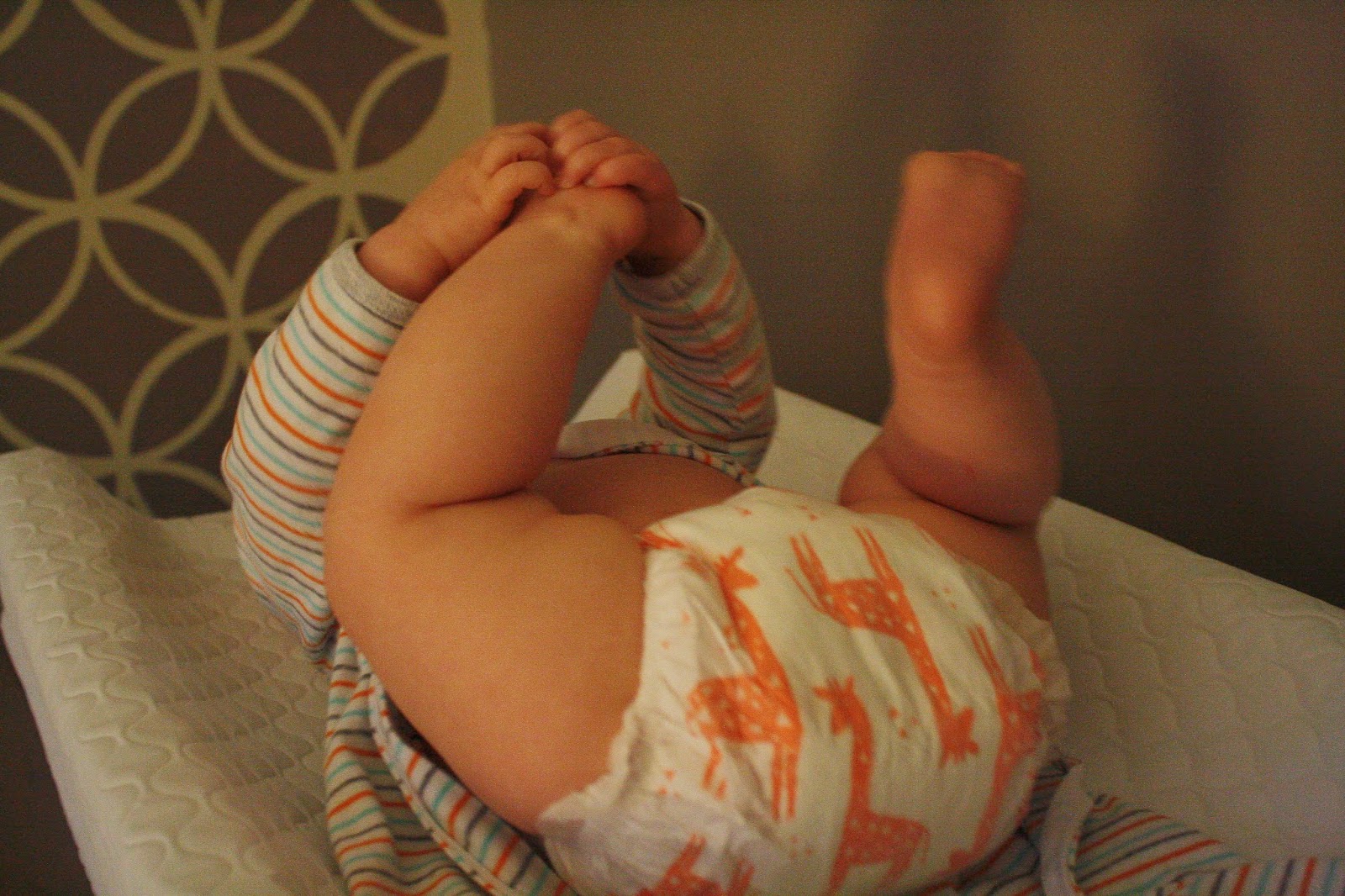 7:15am
We usually snuggle on the couch for a few minutes after he's done eating, but then we go change Caleb's diaper {if I didn't do it after getting him out of bed}. Caleb loves his changing table. He babbles and wiggles and chews his toes non stop. Also, that diaper! 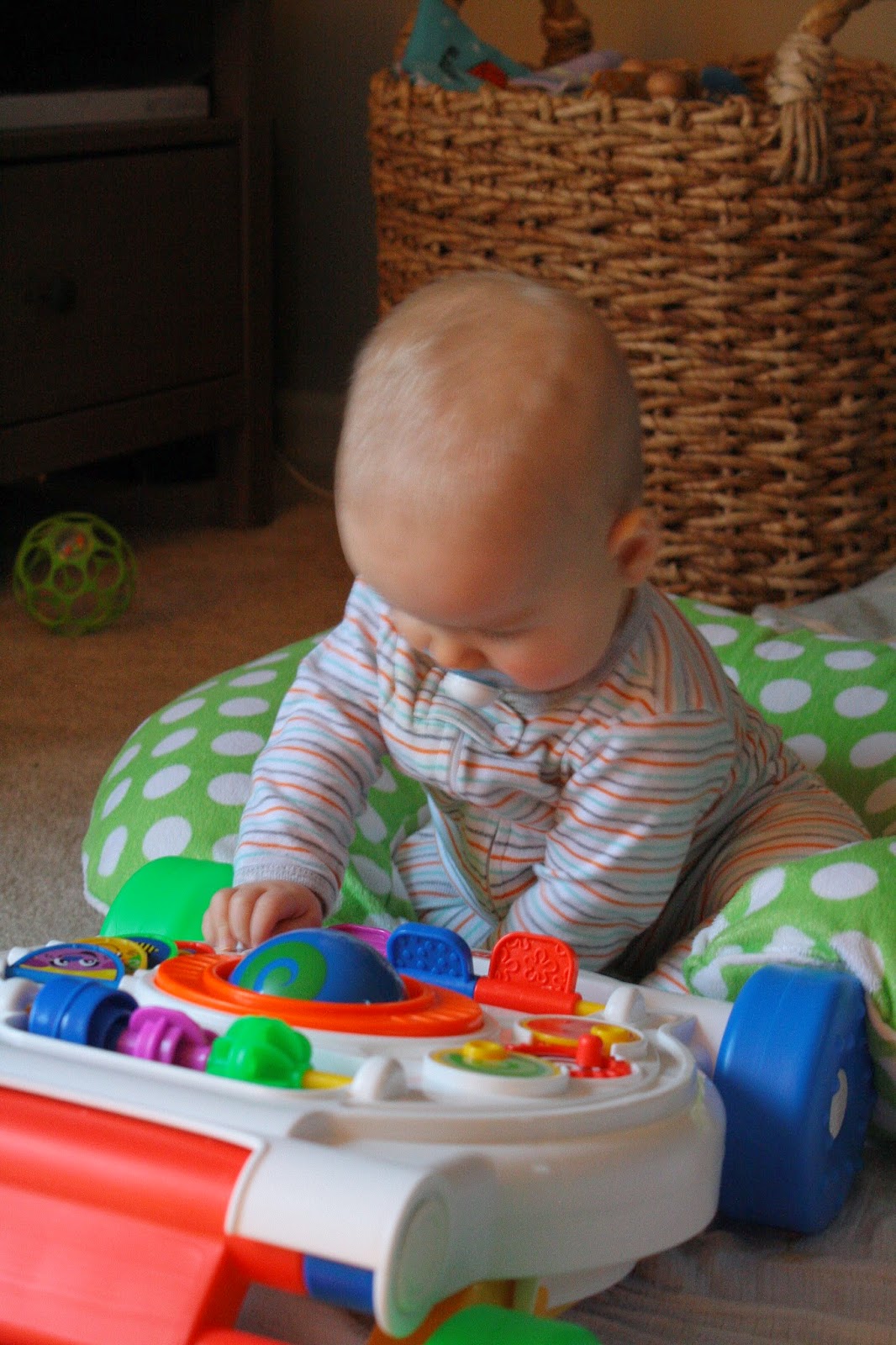 7:30am
As soon as he's done eating and has a clean bum, I put Caleb down to play on his own for a bit each morning. This is when I get around the feeding the dogs, picking up the living room if I didn't do it before bed, and making my own breakfast. We have a little pass through window from our kitchen to our living/dining room and I love hearing Caleb babble and bang on toys while I'm in the other room. He's so so happy in the mornings. I would be too, if I slept 12 hours every night! 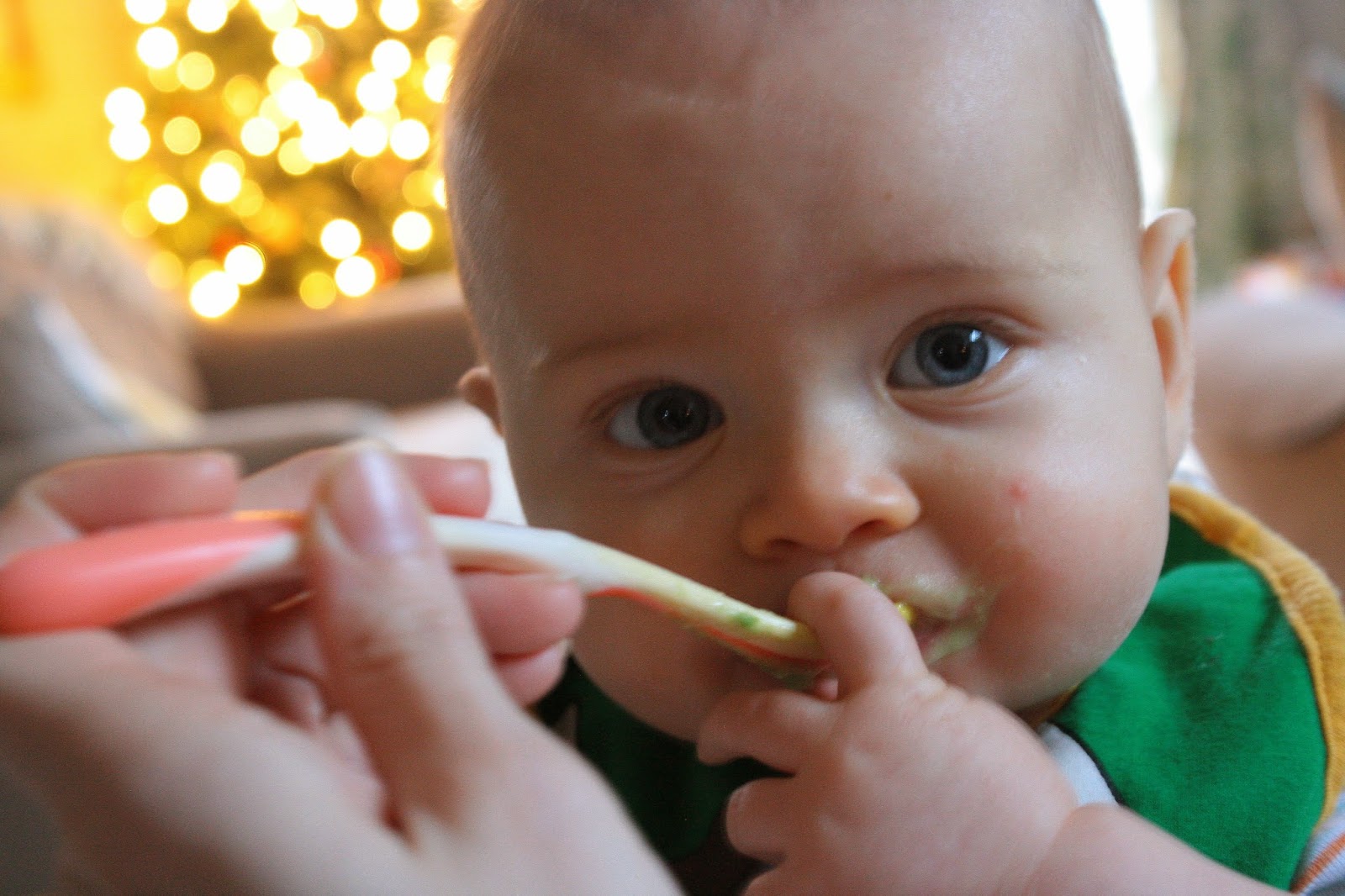 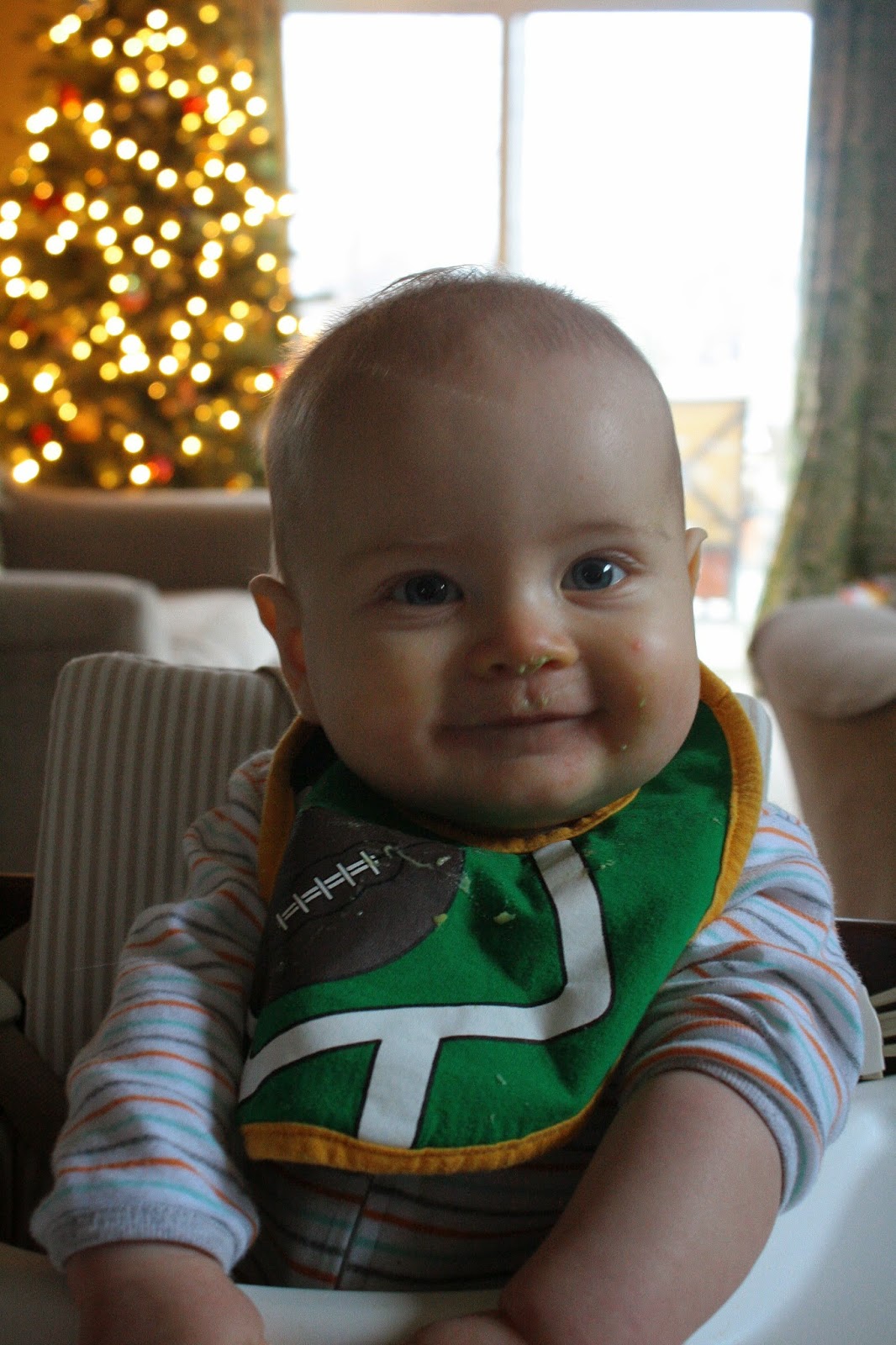 8:15am
After he's played for a bit and I've gotten a few things done, I make Caleb's breakfast. He started solids at 4 months and by now, he really does love them. He is a really big eater, and could probably eat three times a day if we let him. This morning I mashed up half and avocado and mixed with some leftover yogurt. He devoured the entire bowl. While grunting between bites. Such a boy. 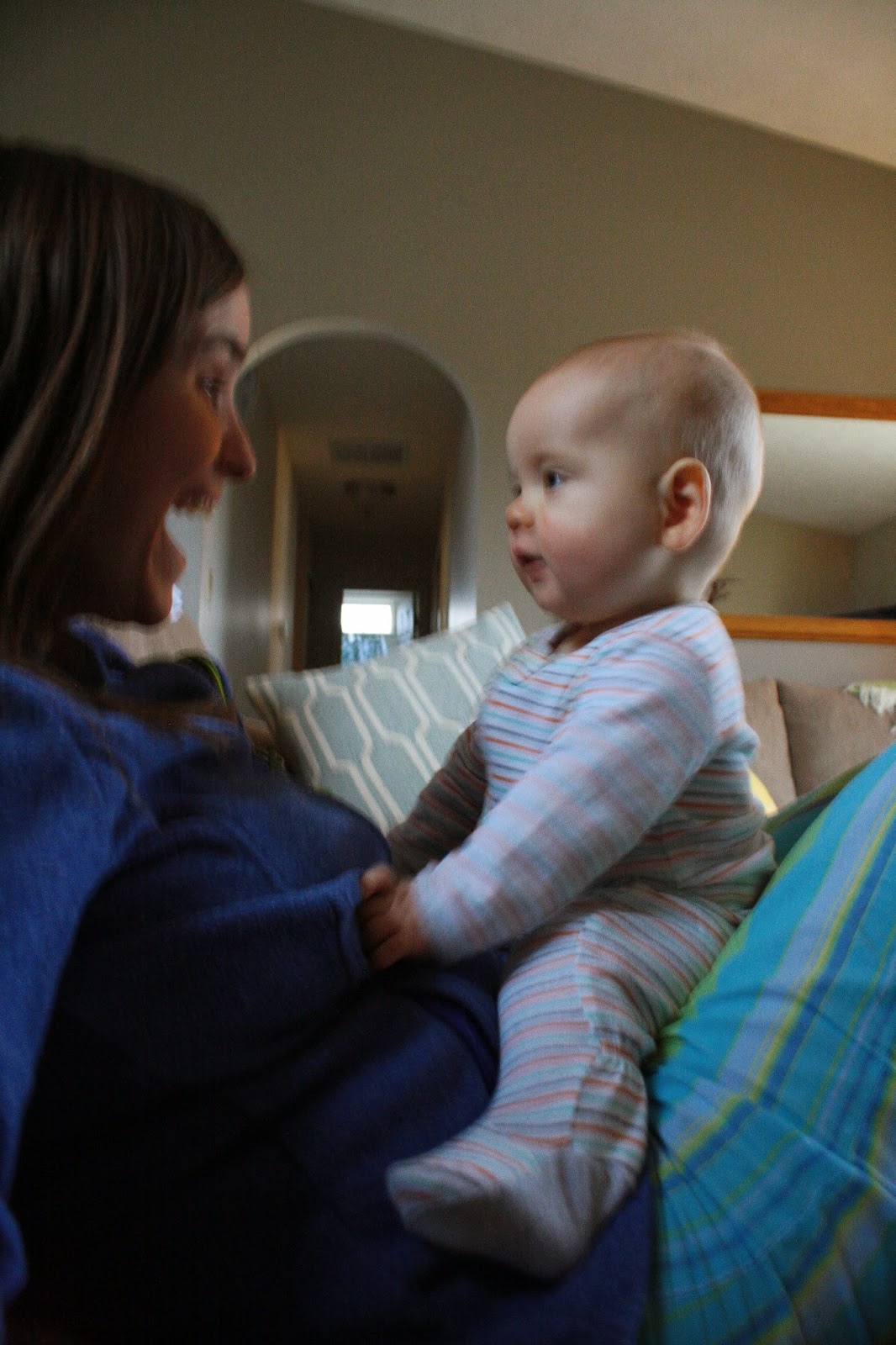 8:30am
This is the point in the morning where Caleb is starting to get a little tired. We hang out for a little bit on the couch and work on our giggles. He also tries really hard to chew on my nose. I keep him busy for a few minutes, because he really has a nap time sweet spot. If I put him down too early or too late, he has a harder time getting to sleep. But once he starts rubbing his eyes and snuggling on my chest, I know he's ready. 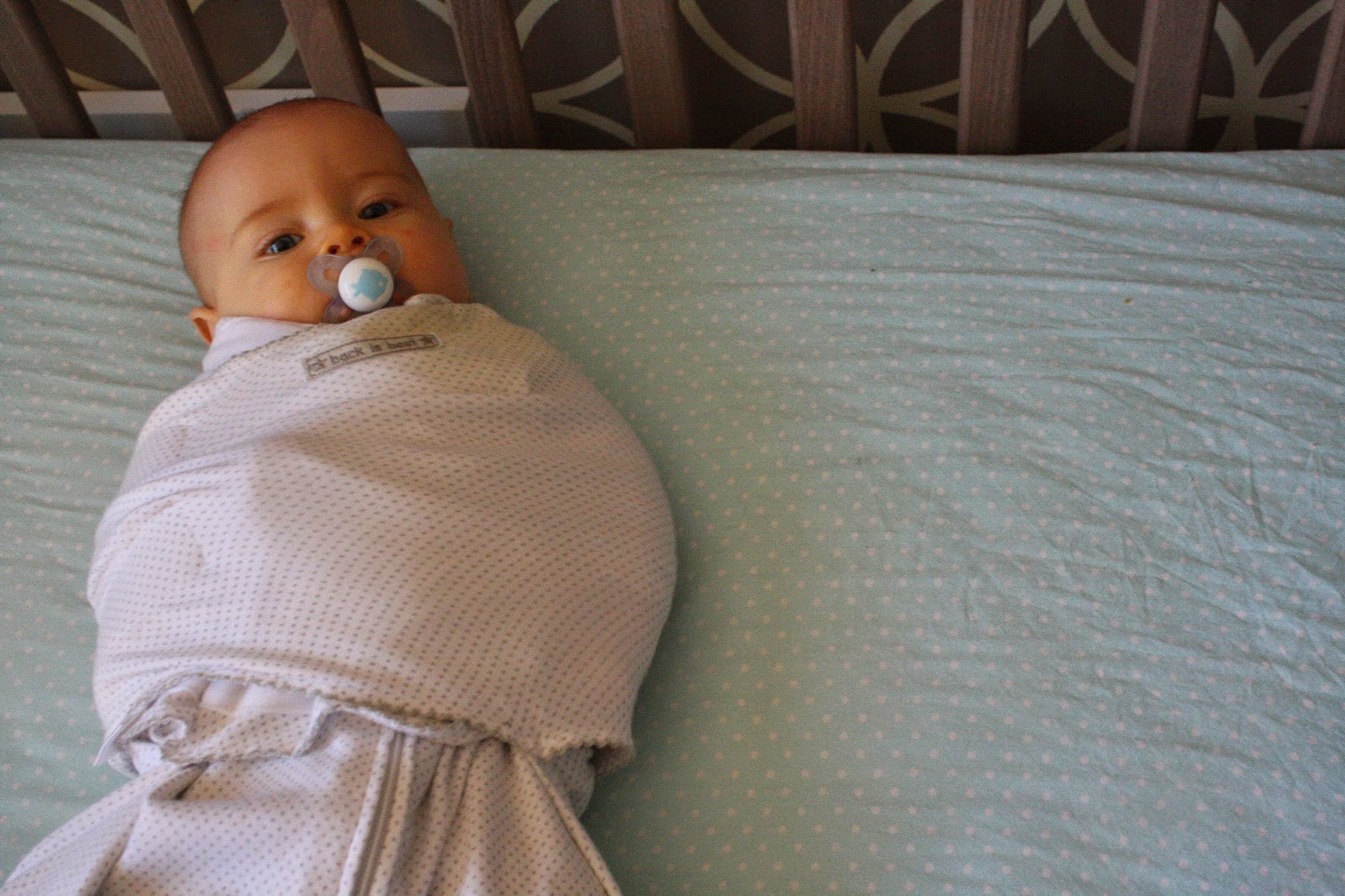 8:45am
Nap time! Since he was maybe a month or two old, we've been putting Caleb down when he's wide awake. It's always been really important to us for him to be able to get himself to sleep and not to depend on nursing or rocking or being held to be able to sleep. It took some time, but he does great now! He still loves his swaddle. Also, please note the beautifully scalloped edges on his SleepSack. Yeah, I didn't realize I bought him a girl swaddle. Sorry, kid. So anyways, I put him down wide awake for his nap. He wiggles for a few minutes but is asleep really quickly. 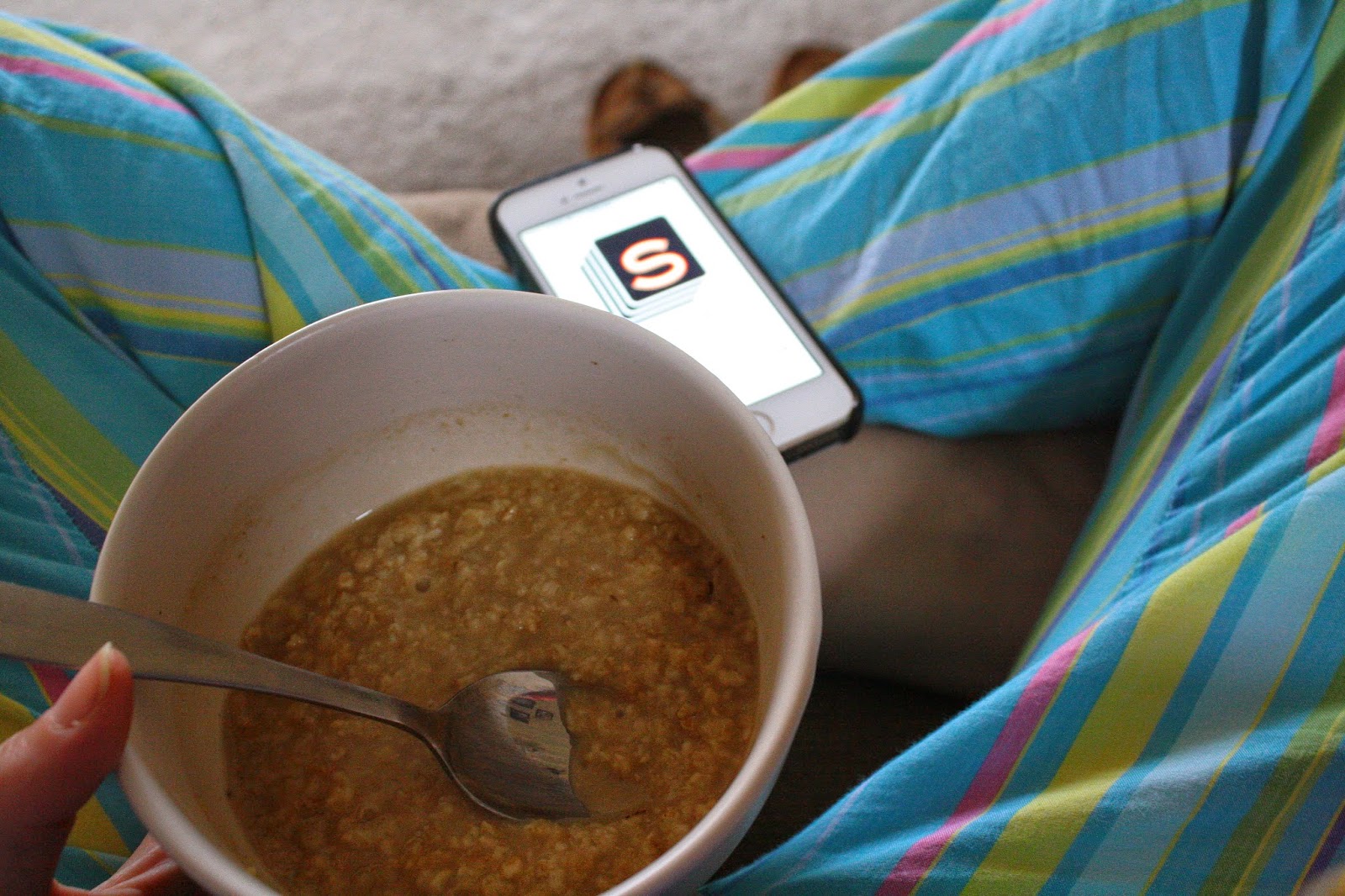 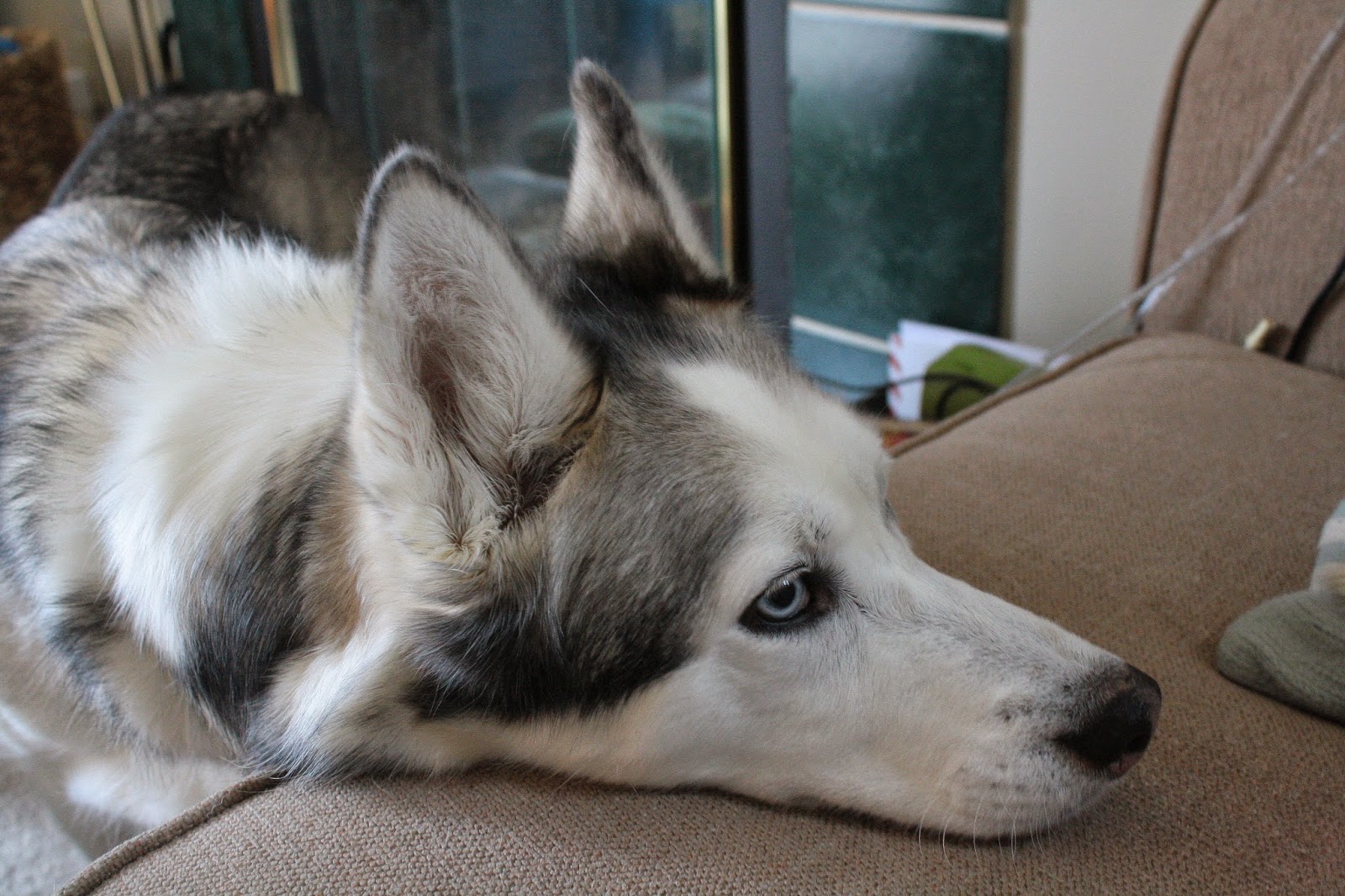 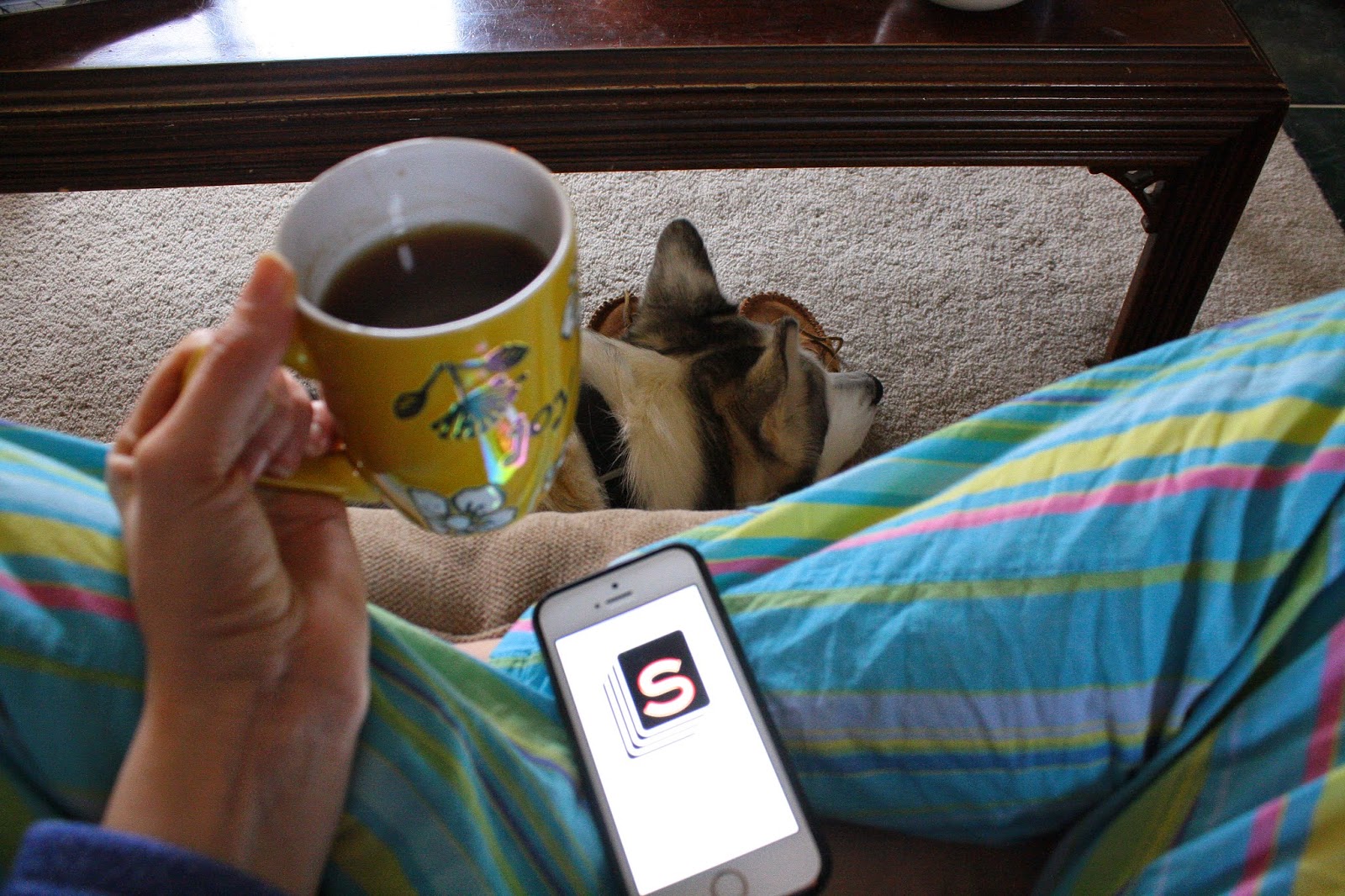 9:00am
How did I forget to mention this?? This particular morning I've had Serial on in the background since Caleb woke up. I usually watch the Today show, but this day I was finishing my 24-hour binge of this amazing series. So after I put Caleb down, I reheated my oatmeal and tea {since I never got around to them after making them earlier} and sat down to finish the finale. Once it was over, I did other things like start some laundry, pack our bag for swim class, get my swimsuit on, and sit down with this study until it was time to wake Caleb up. 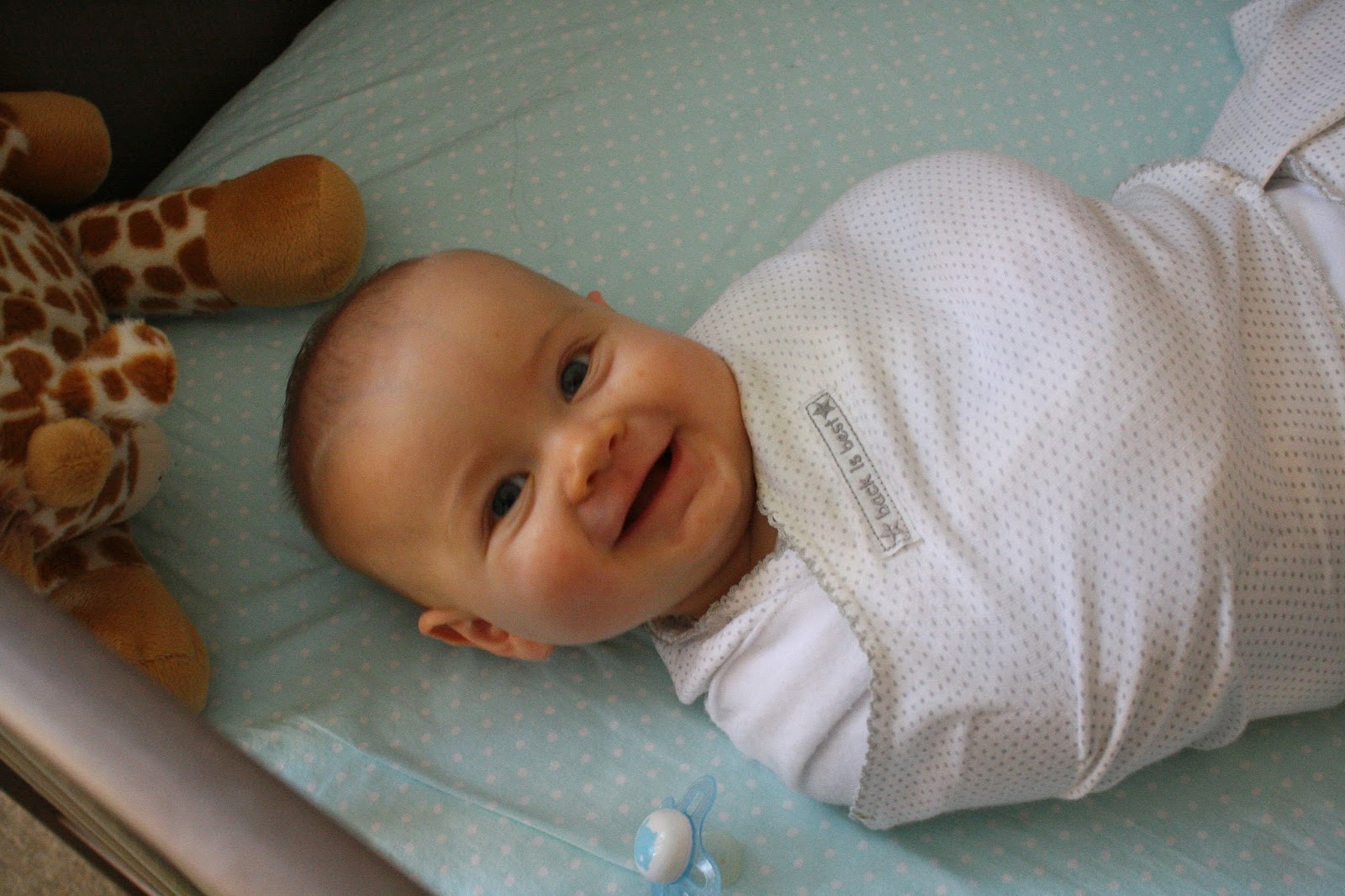 10:30am
Caleb usually sleeps until 11ish, but on Fridays I wake him up a bit early to eat and get out the door for his swim class. And I love waking him up- he's so jolly! I grab him from his crib and feed him. 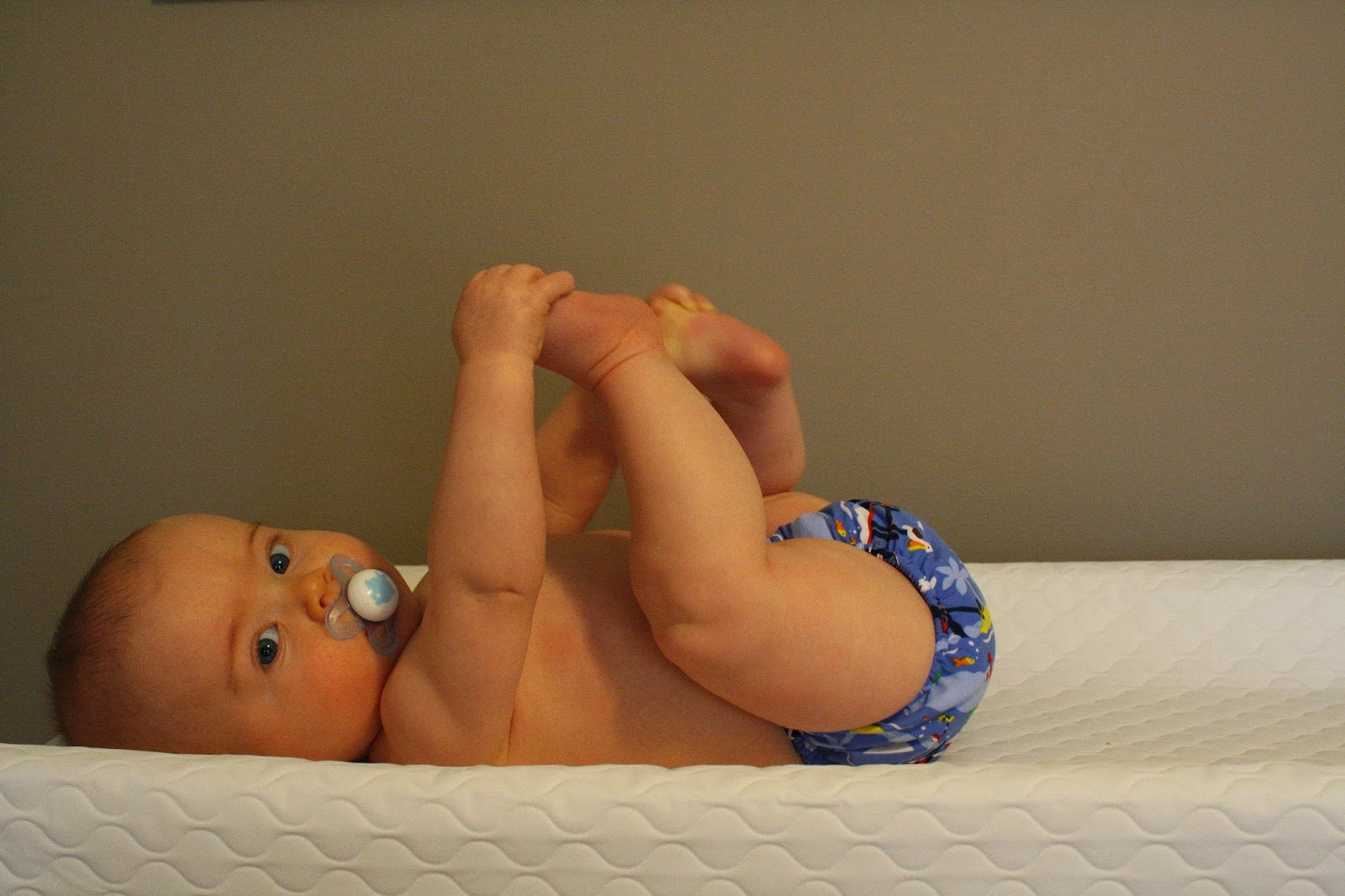 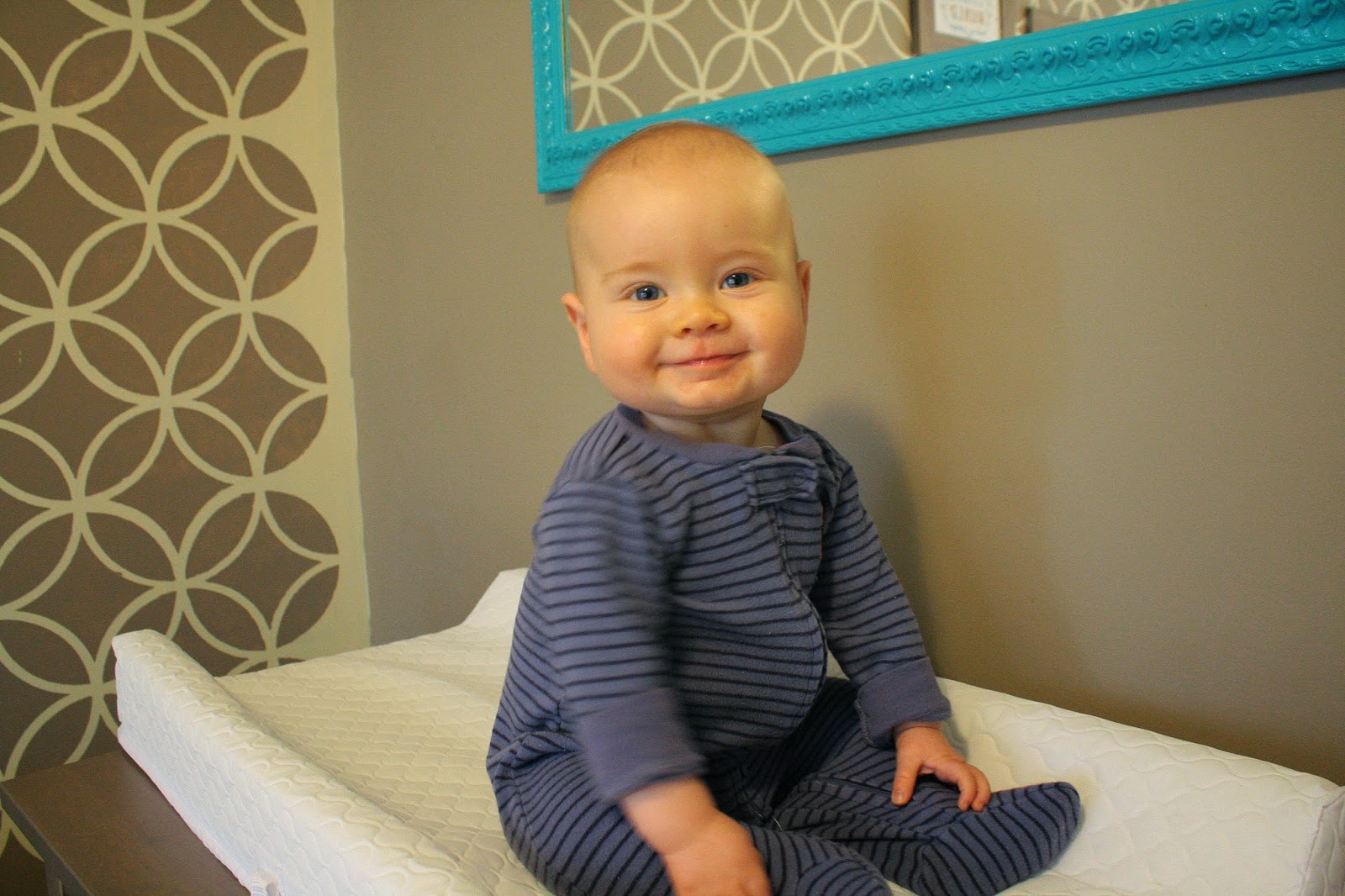 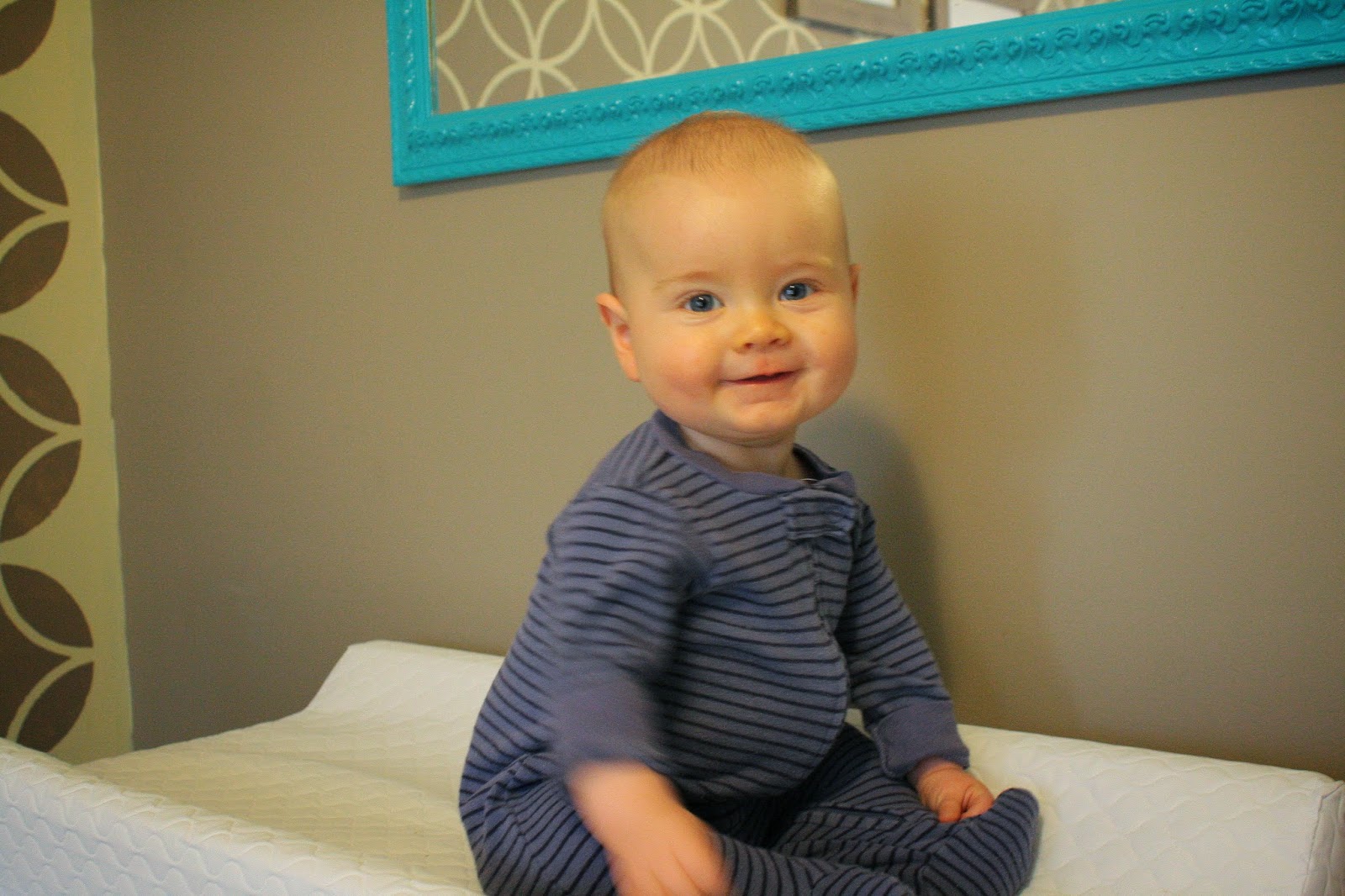 10:45am
Since 6wks, Caleb has been going to infant swim class every Friday. That's 21 weeks! The class only goes to 6 months, so this day was his last before moving up a level. I was a little sentimental about it, which is sort of silly. But he was so itty bitty when we started! He slept through the entire class. Anyways, after he was done eating, I put him in his swim diaper {we love these}, put on clean pjs {so much easier to change into after swimming!}, and packed us both up to drive to class. You'll just have to take my word for it that we went to class, he napped on the way home, and talked to himself in his crib for 30 minutes after we got home before falling asleep for his afternoon nap. 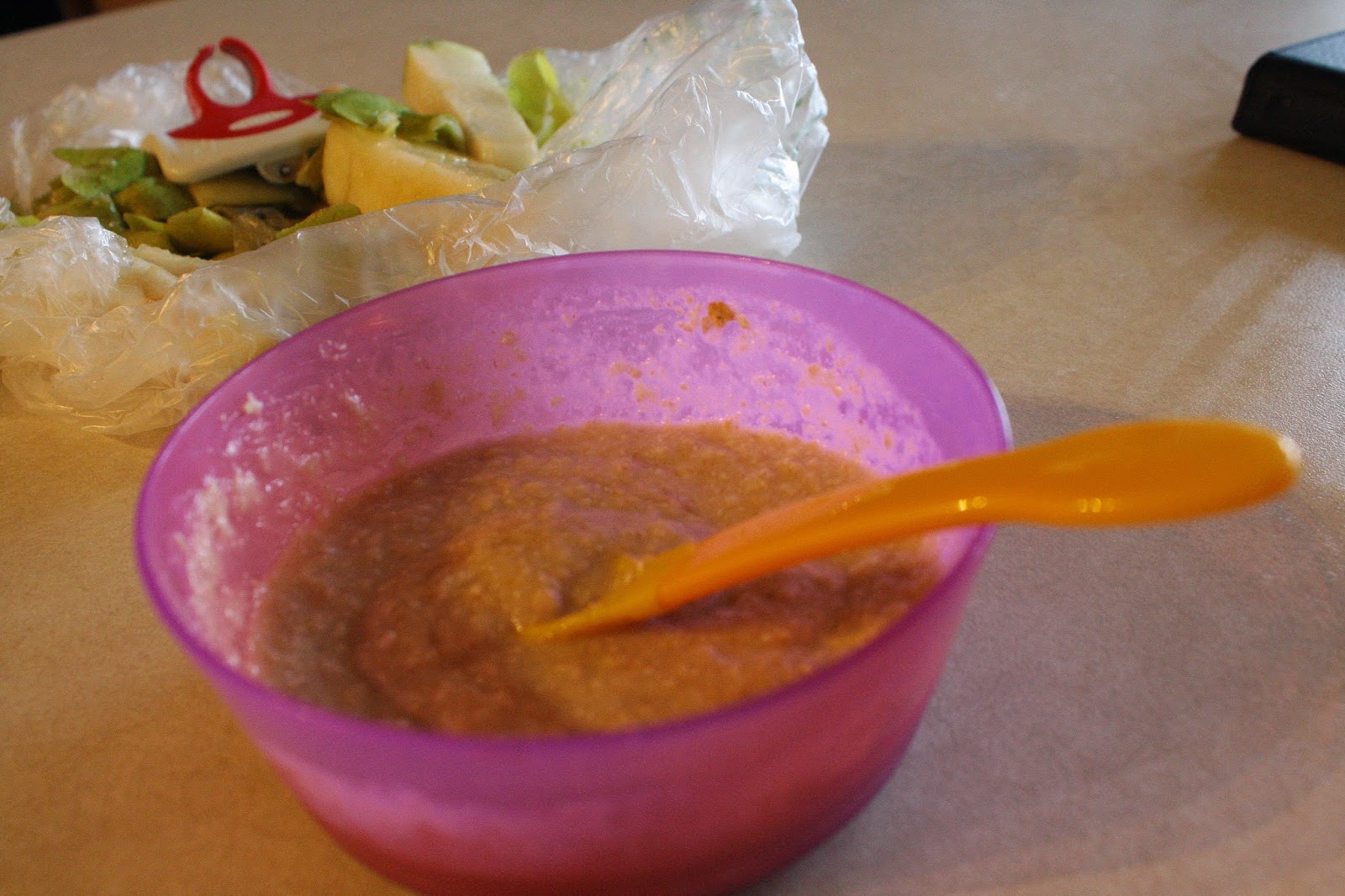 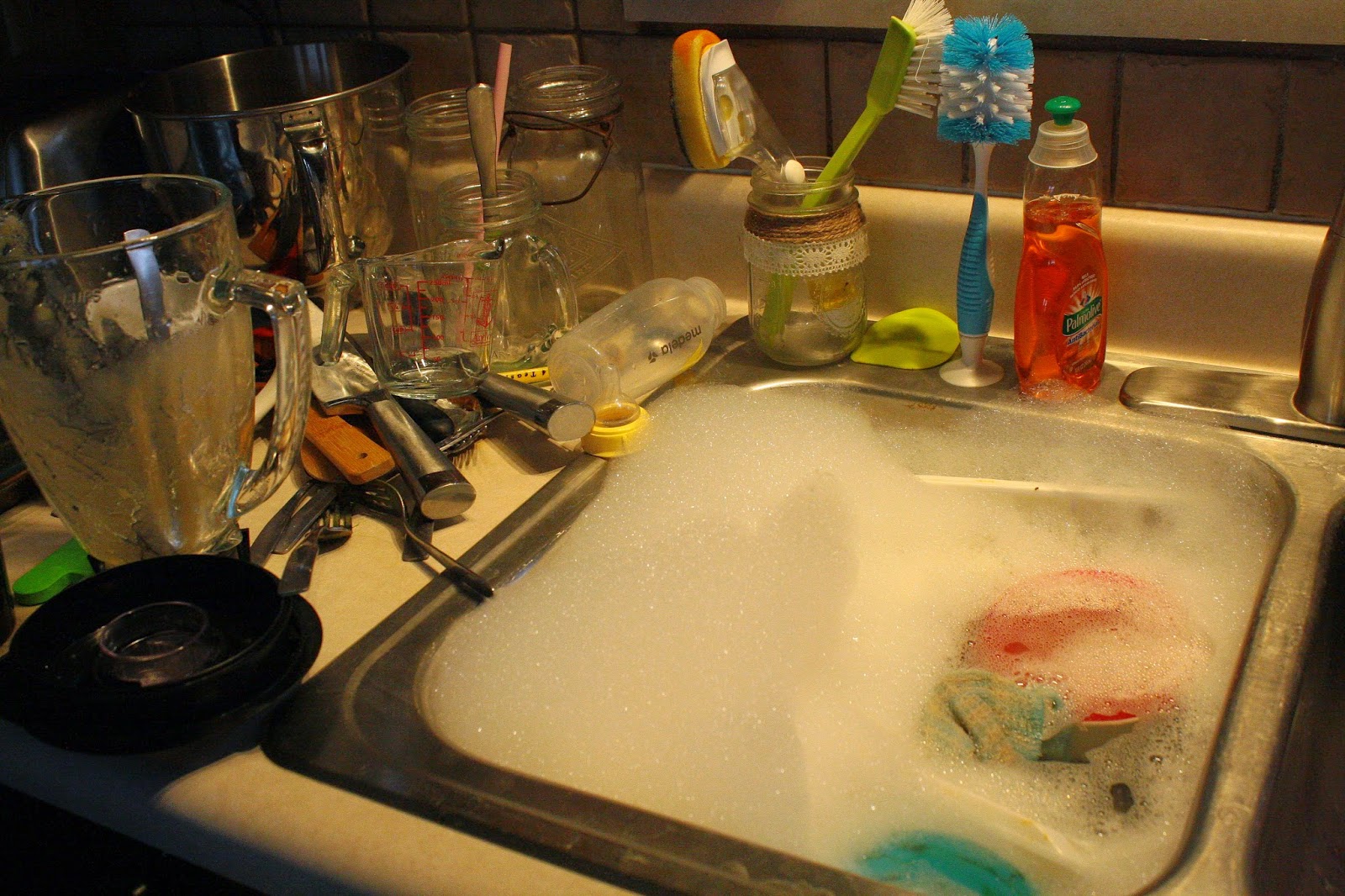 2:00pm
After swim class and finally getting Caleb down {late} for his afternoon nap, I realized I never mashed up his pears I bought earlier this week. So I peeled and pureed them. I poured some into ice cube trays to freeze for later and added some to oatmeal for him to eat later in the evening. By this time, I realized Justin would be home soon and I still had to get a few things done before I started getting ready for the Christmas party. So I got to work on the mountain of dishes and did some more laundry and took out the trash. 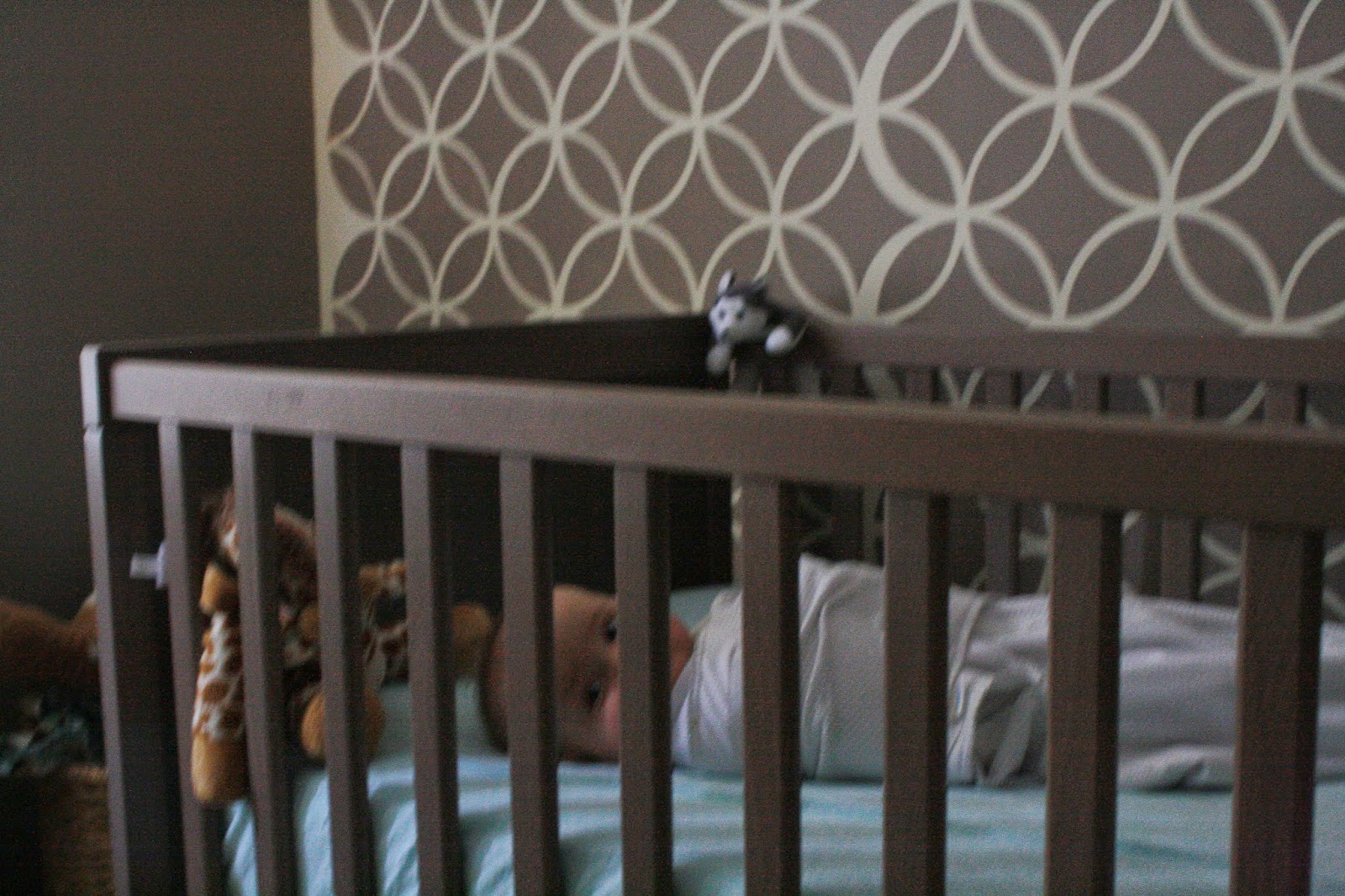 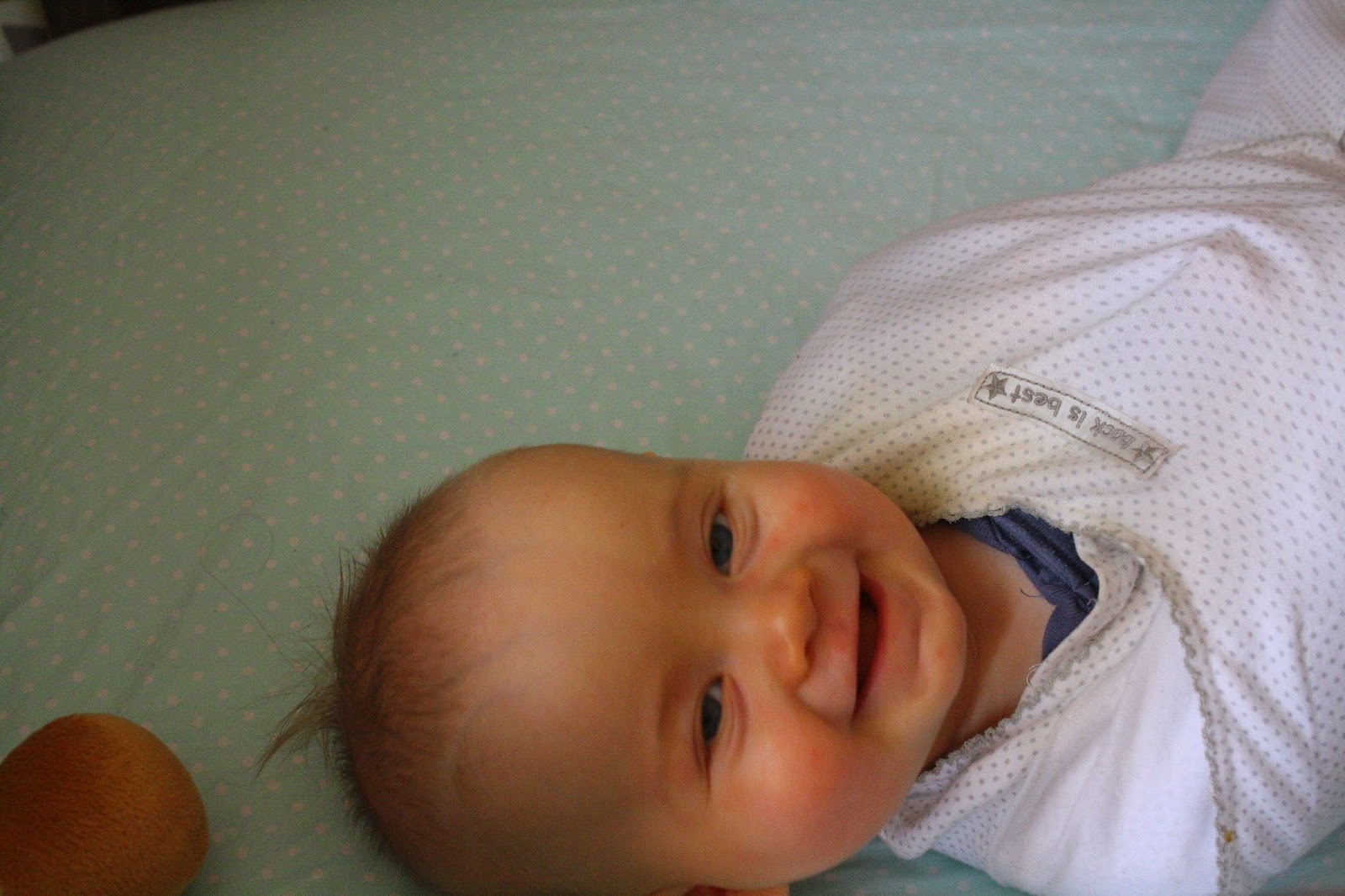 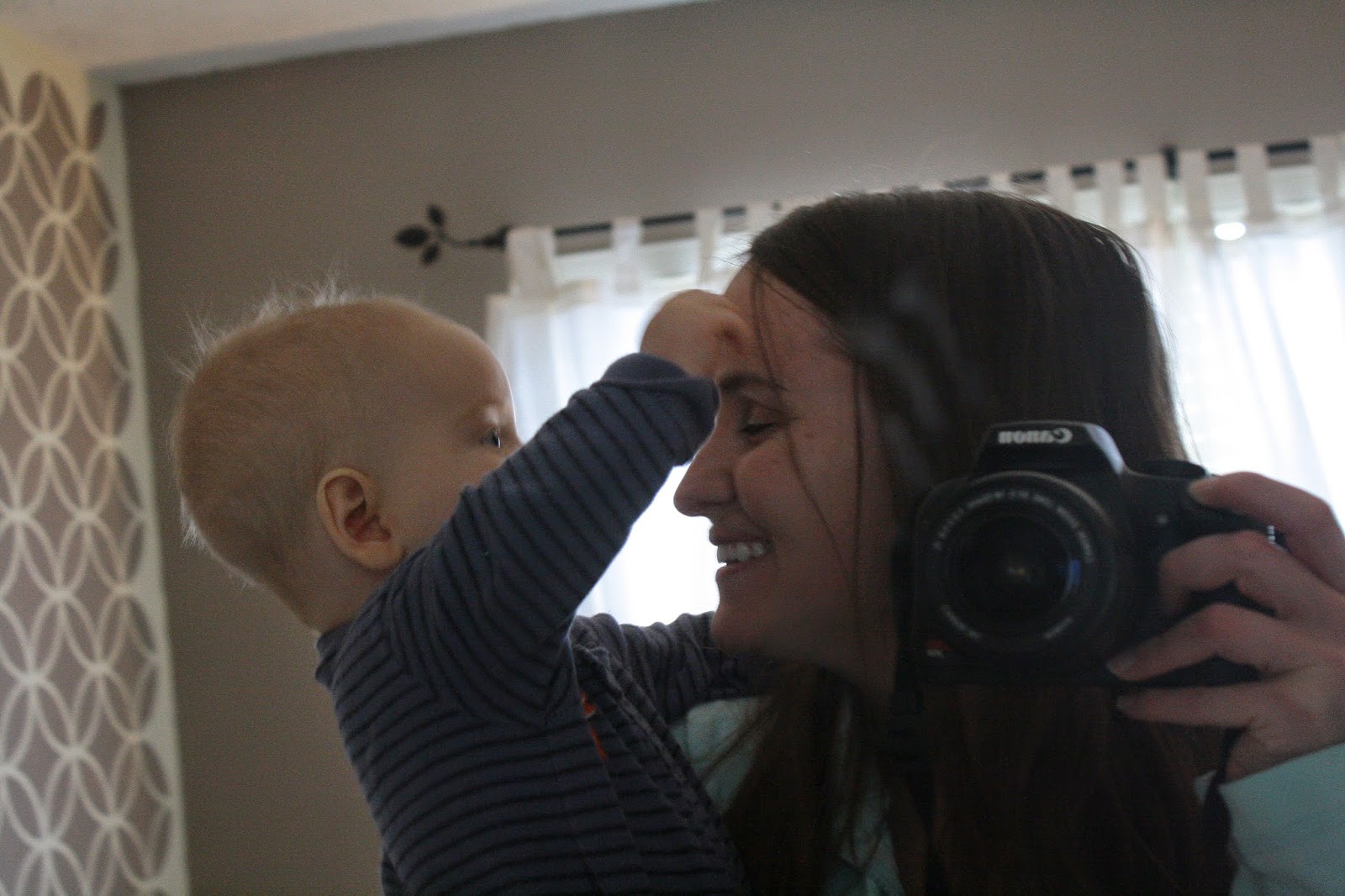 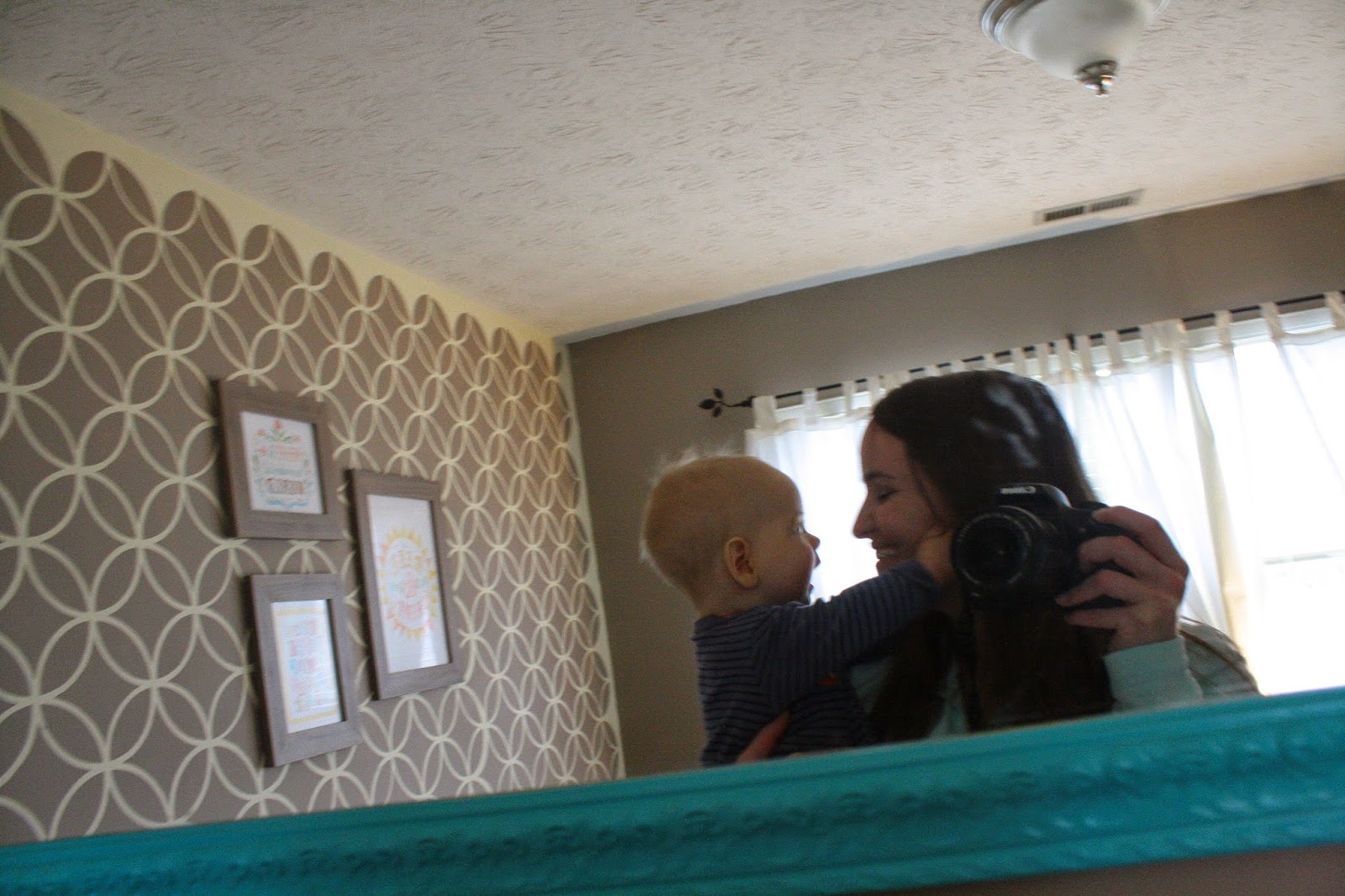 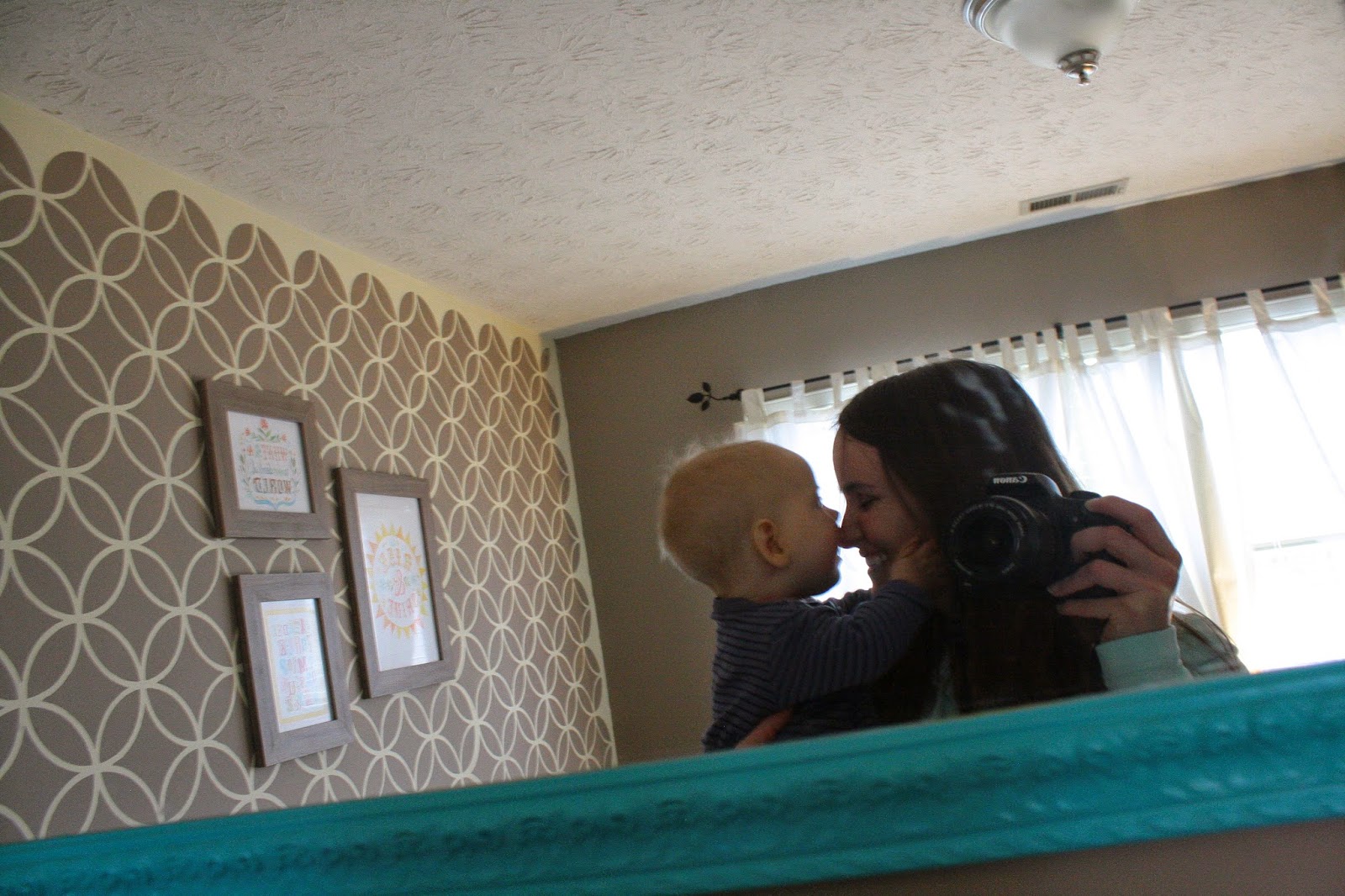 3:00pm
Mid-dishes, Caleb's nap ended. I grabbed him from his crib. While his hair is still wet from swimming, I always put a hat on him since it's cold out. And it's probably the cutest thing about Friday's around here. He wakes up happy again and eats. Again. {notice a pattern here? Babies live the life}. 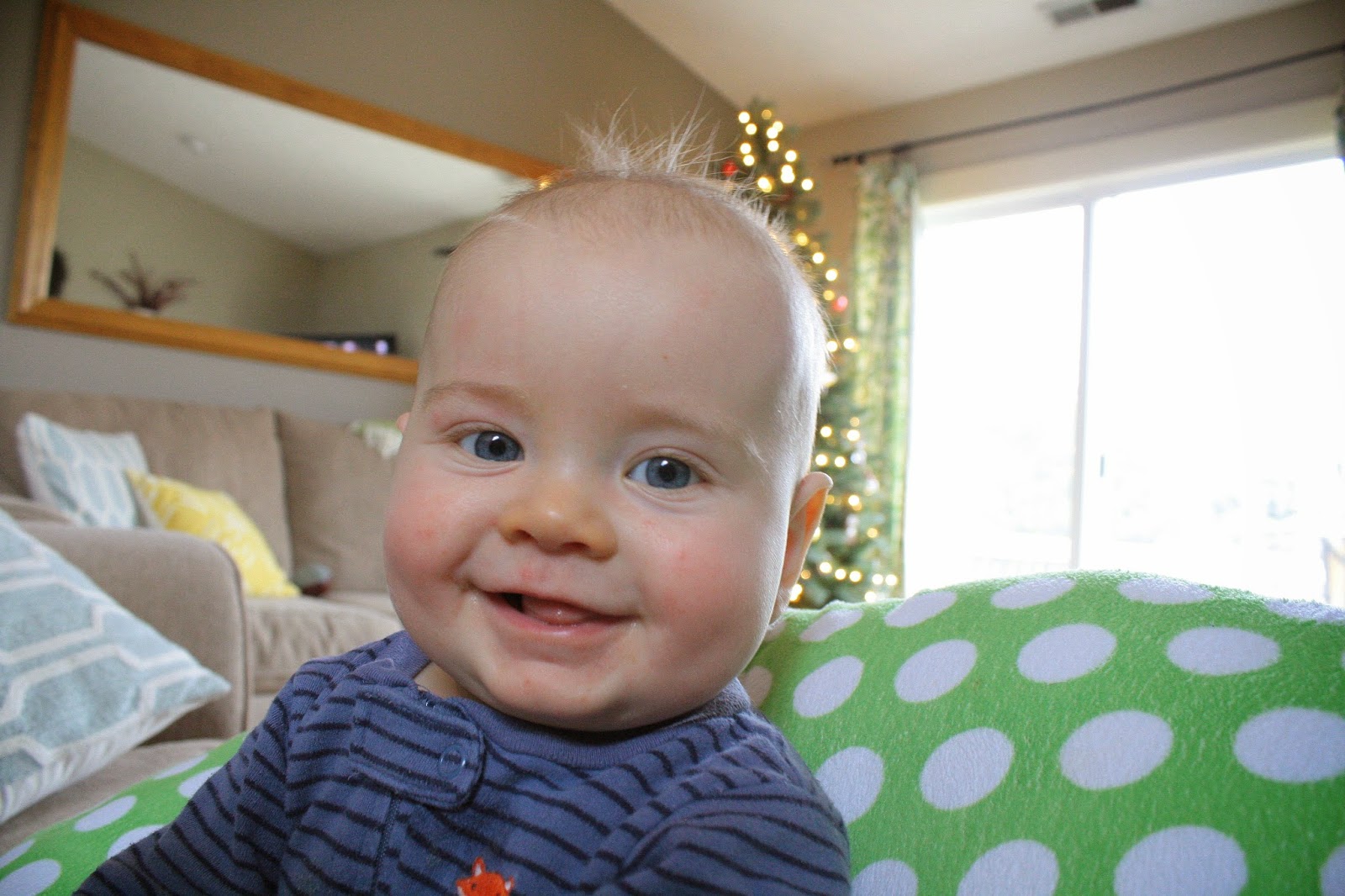 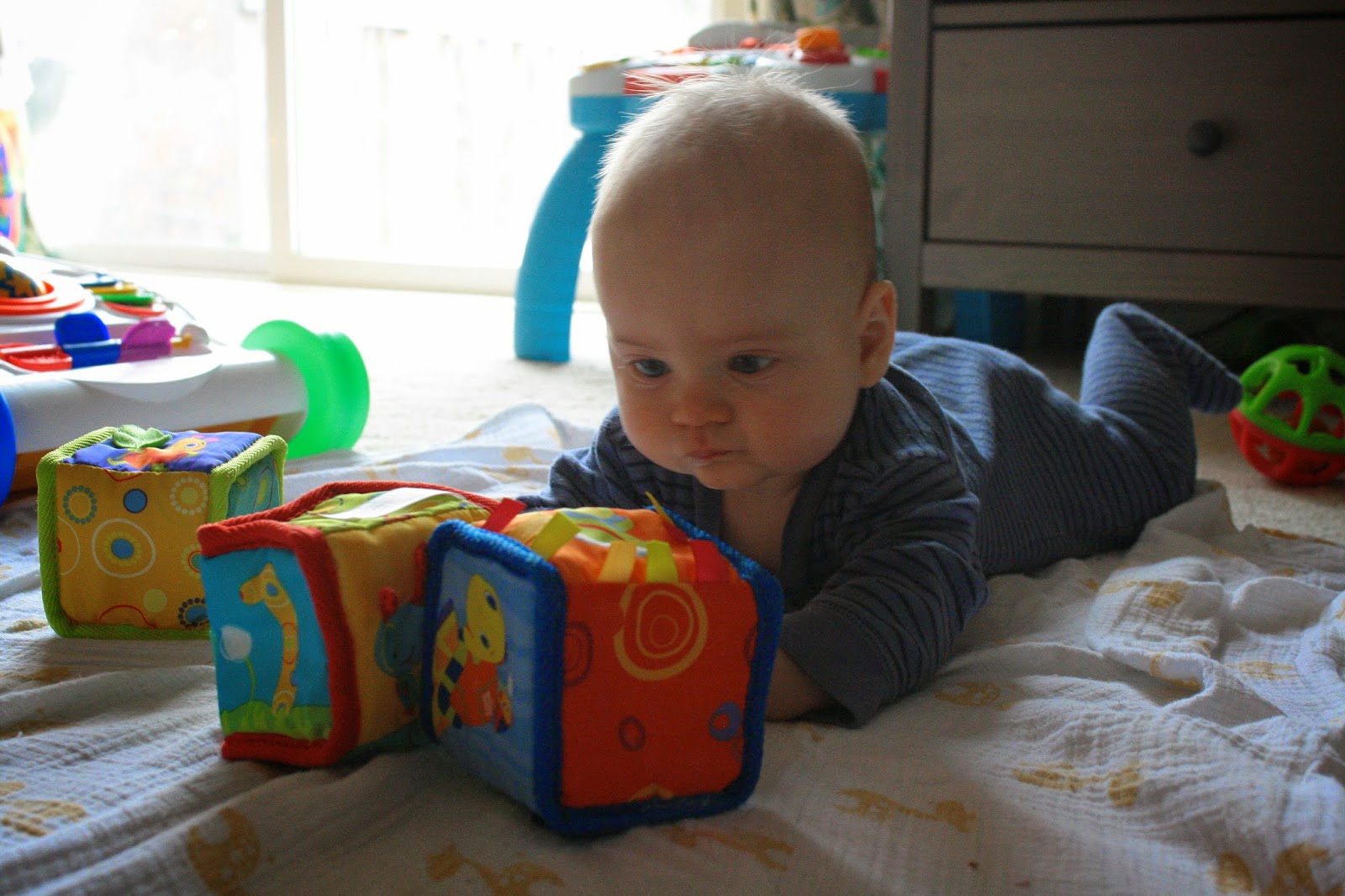 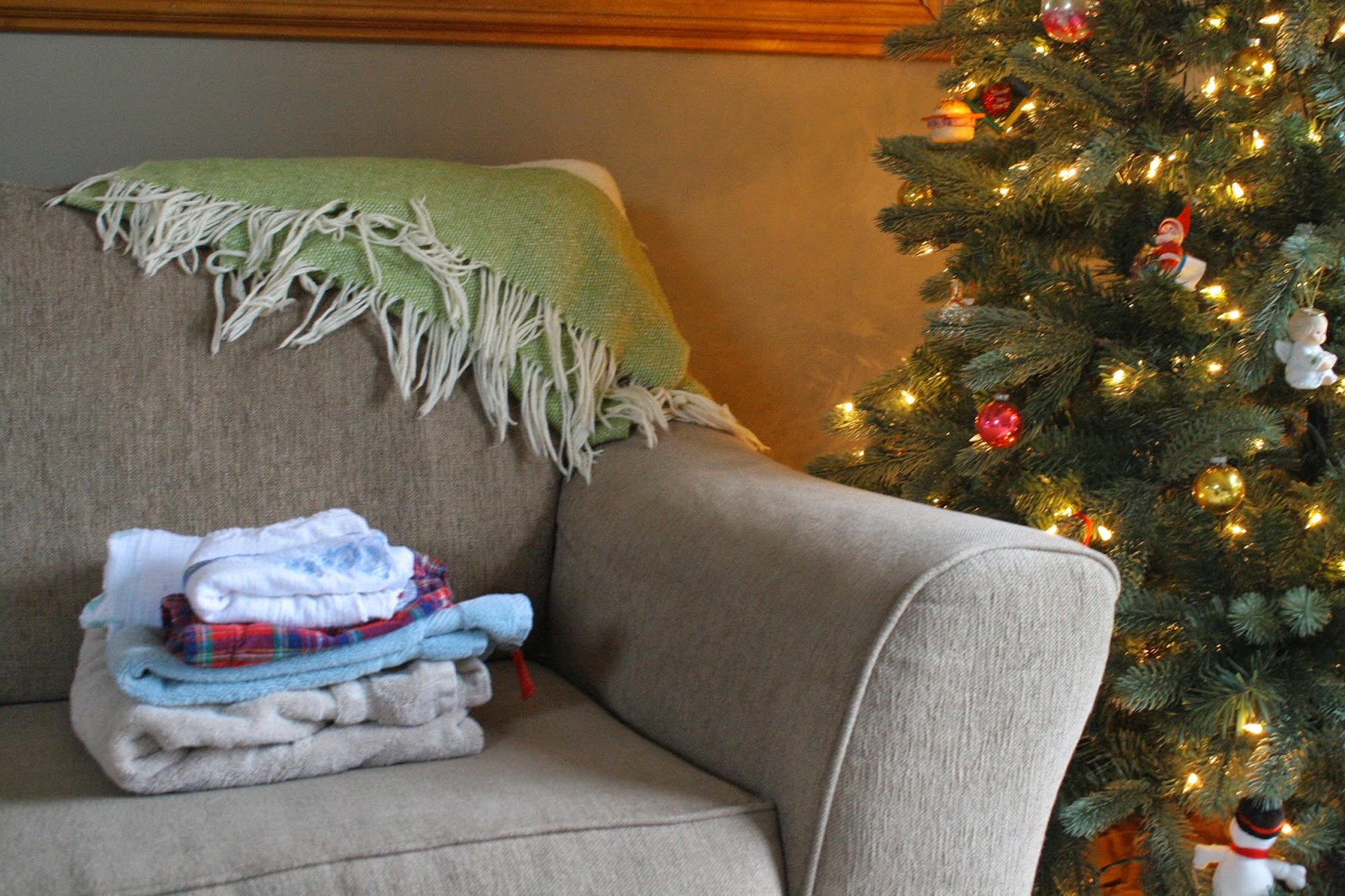 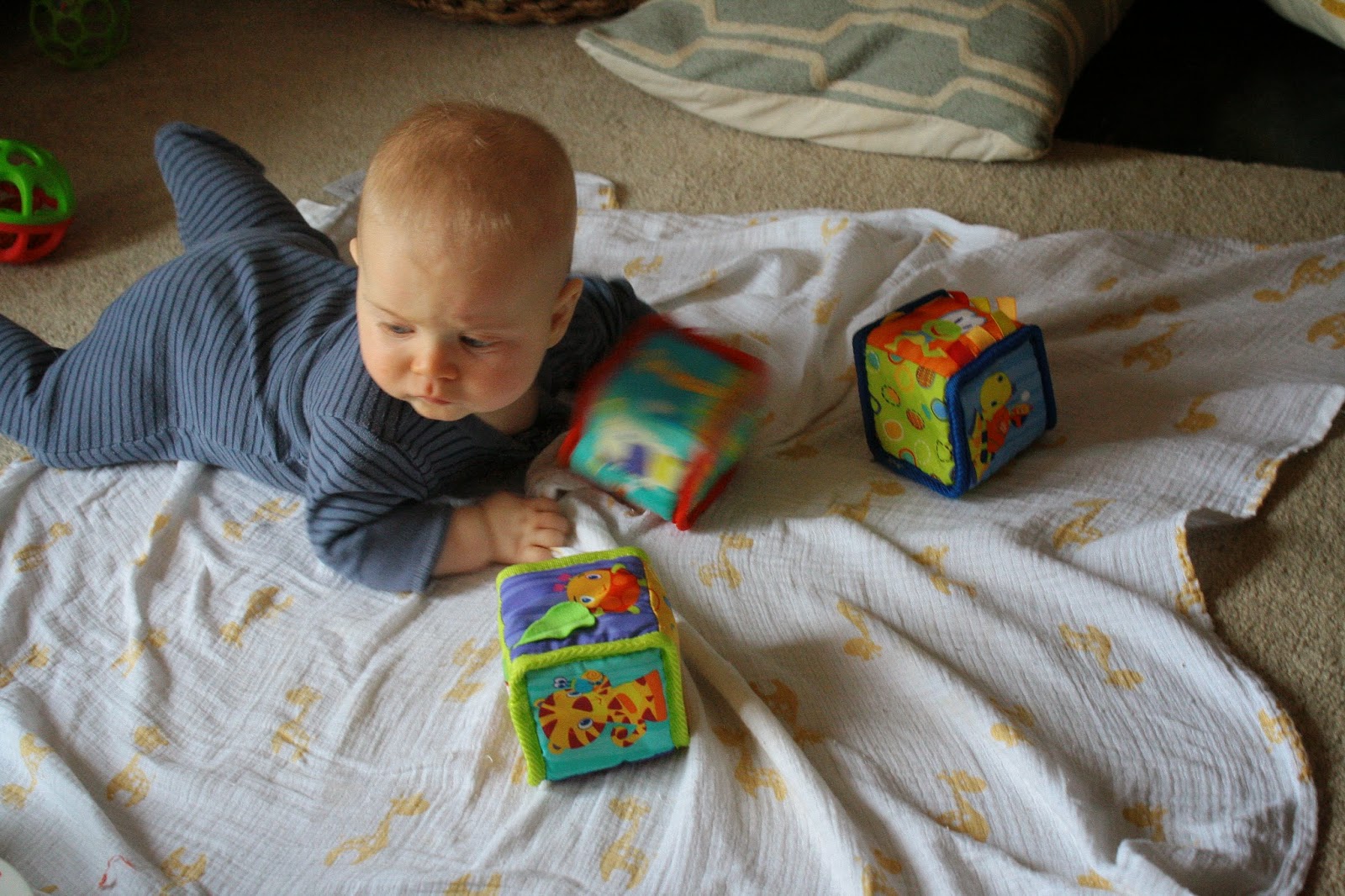 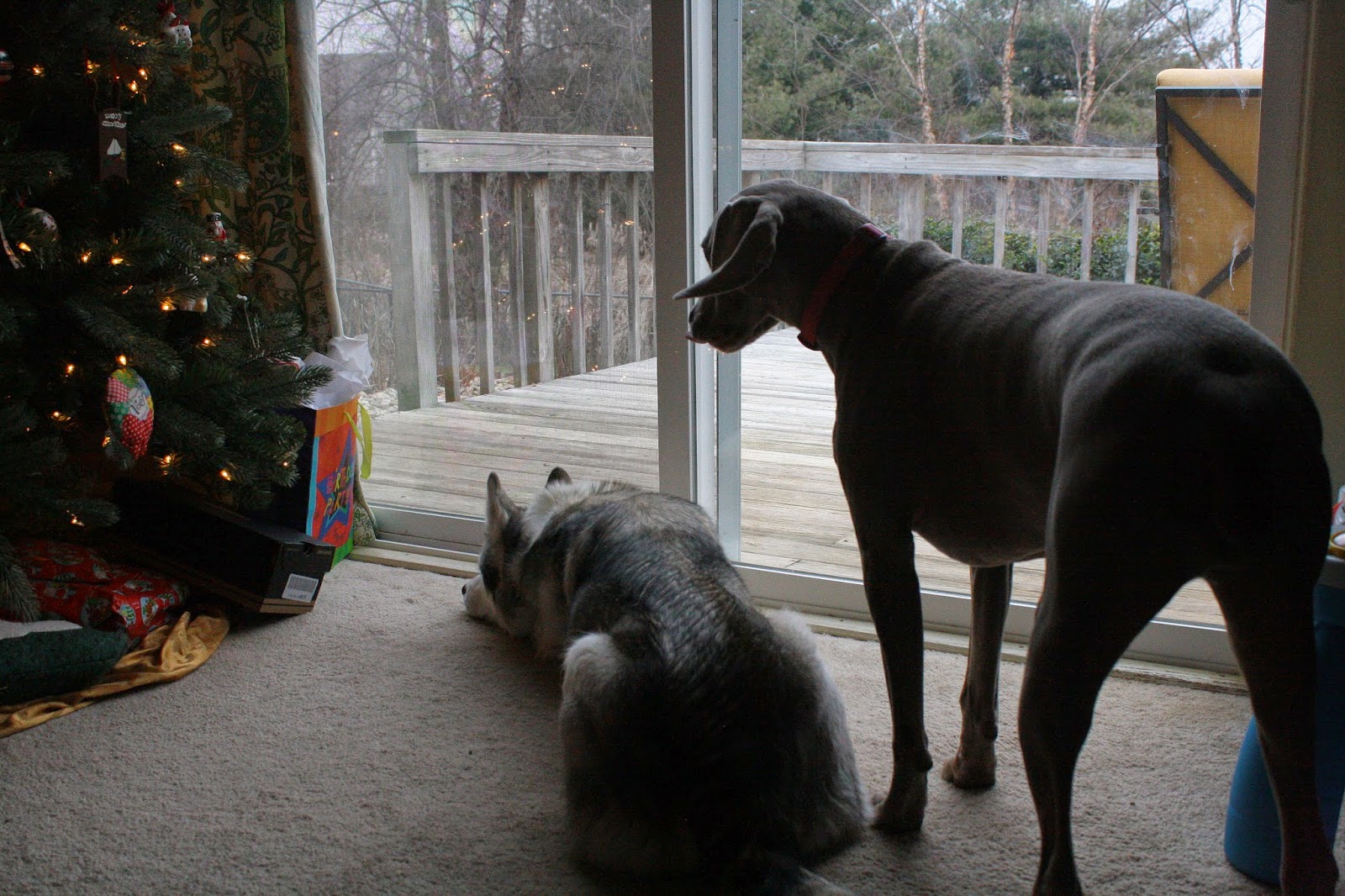 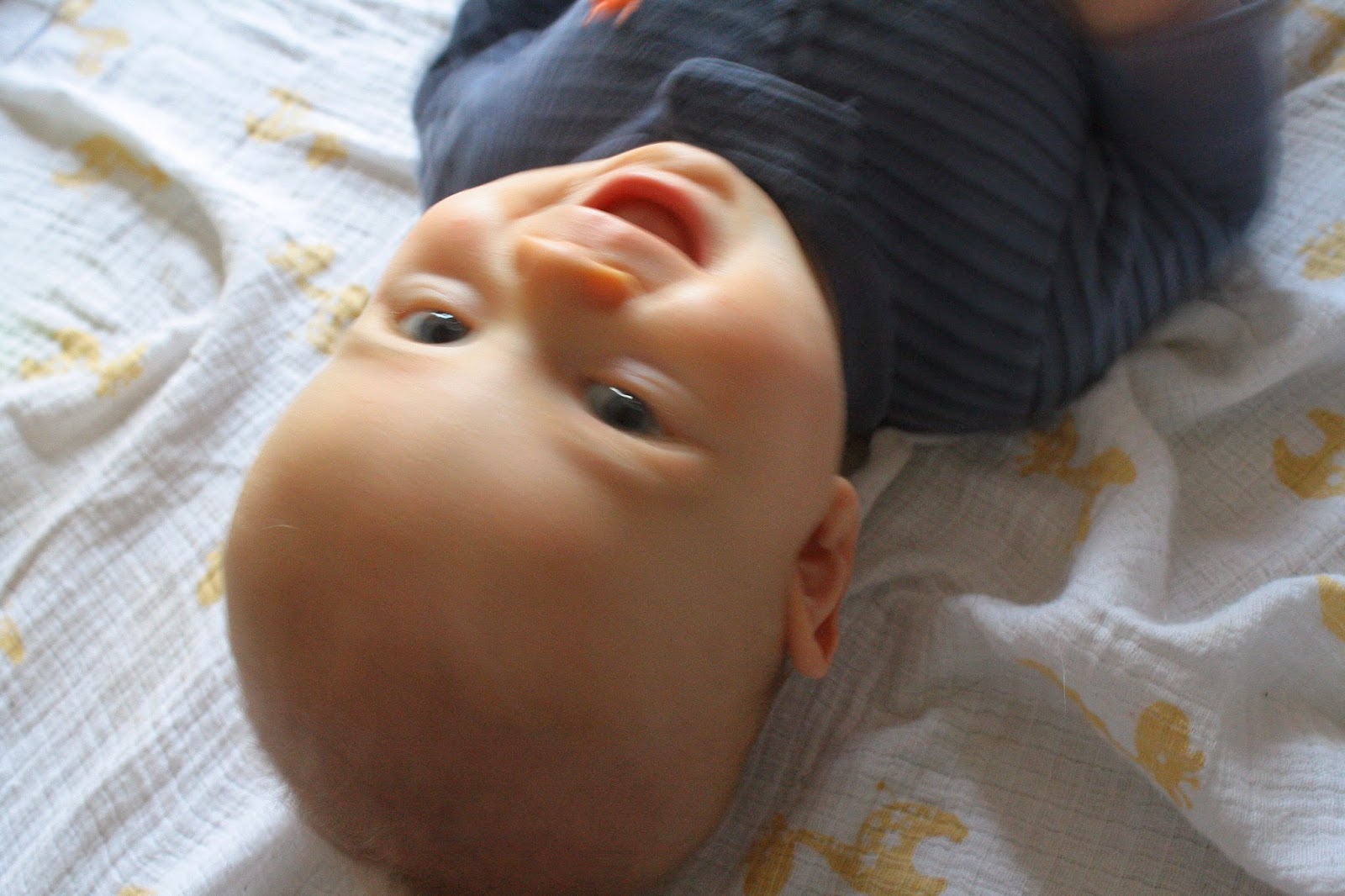 3:20pm
After eating we play for a bit. I make fun of his crazy hair and get him to giggle. Then I remember he hasn't done any tummy time so I set him down while I fold some laundry. And the dogs get really excited that their dog neighbor is outside and I let him out {that's a totally necessary detail to include in this post, right?}.
Here's where our day got busy! Justin came home early {hooray!} and brought home some exchanged Christmas gifts I was excited to try on and then he played with Caleb a bit while I finished the dishes and picked up a bit more. And then Caleb when down for his evening cat nap around 5ish and my sister showed up. We talked a bit before Justin and I both got ready for the party. Mid getting ready, Caleb woke up and my sister fed him his pears and oatmeal. We rushed out the door after kissing him goodbye. Shortly after we left, my mom arrived and relieved my sister to take over babysitting duty. We didn't get home until late, so we didn't see Caleb again until he woke up the next morning.
So yeah. In hindsight, I really want to try this again to capture our entire day. I love Caleb's nighttime routine, and want to document that for his PL book. Also, writing out this post made me realize I skipped lunch on Friday. Whoops!

Email ThisBlogThis!Share to TwitterShare to FacebookShare to Pinterest
Labels: a day in the life, caleb, life

Another friend posted this article and I was so pumped to see you and Justin as #20!
http://twentytwowords.com/34-hilarious-baby-announcements-gallery/gallery/20/