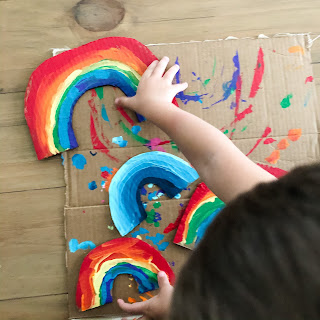 It’s true though, isn’t it? I’ve been thinking a lot about how this crazy global pandemic feels eerily familiar in some ways.

Two years ago around this same time, our family was smack dab in the middle of what I only hope is our hardest season ever. It was one of those seasons where you wake up every morning and keep your eyes closed extra long just hoping it’s all been a bad dream. But then you wake up and do all the things you need to do, because that is how life works. I’m guessing you’ve been there, too?

In that season, we dealt with hearing doctors say things a parent never wants to hear about their child (who ever wants to be the impossible statistic or uncharted medical case?!), prayed for miracles, passed each other in the night as we took shifts in the ICU, trudged through health crisis after health crisis (or at least it felt so at the time), cried and mourned the long term loss of some things for our child and then slowly made a new normal when it started to calm down.

When I type it up, it all seems so concise and neatly packaged. Isn’t that how it always is when we’re able to look back? In reality, it was anything but. Lots of crying. We were ‘fired’ from one doctor for missing too many appointments because we prioritized others (thus feeling like failing parents...). One of our kids spent more time with his aunt and uncle than us for weeks. I gained 10lbs. Our other son spiraled into extreme separation anxiety for months and had other lingering effects from medical trauma.

But now, it’s two years later. We absolutely have not forgotten most of it, but it’s not nearly as heavy today as it was in the middle of it. We’re on the other side. We still deal with the big lingering health things (which is why we take social distancing super seriously! We’ve experienced the unfortunate side of a medical statistic), but also it feels normal now.

Looking back is ALWAYS so helpful for me to process what’s in front of me. What have I already learned that is also true now?

Basically, all of this is a long winded way to say two things. One, stay home. My kiddo has lifelong effects from a germ that is literally on every surface everywhere- and we had no indication beforehand that he would be so effected. We had no one warning us or telling us how to stay healthy- and how I would give both my arms to have had warning like we all do now! Take this seriously. Don’t risk it, for yourself or anyone around you.

Second (and most of all!), God keeps his promises. I have experienced that firsthand, haven’t you? I spent so many nights, for months on end, just praying that God would get us through to the other side and all the days in between. And now here we are, two years later and through it! We’ll get through this, too. Even if it looks messy and frustrating and maybe even heartbreaking for some of us, he’ll carry us through it. He always does.

I’m bracing myself for some messy days (literally, because I have preschool boys and our backyard currently could be mistaken for the neighborhood dump and it seems I’ve just given up even trying to pretend I care about my laundry room), short fuses, and pity parties. Maybe my kids will learn some stuff from my modified homeschool set up. Maybe not. I might get a house project done and run lots of miles and read my Bible every morning. Maybe not. I’m not sure there is any real way to do uncharted things like this well, outside of holding onto the promise that Jesus will carry us through. And remember that he always does (even if it looks different than we want/hope/prefer/would plan ourselves).

In the meantime, I’m a firm believer that he gives us things like sunshine and snail mail and innocent kids with their fart jokes and the occasional glass of wine and pizza and FaceTime and the ability to go for a run to help us move through the days until we’re on the other side of whatever feels heavy.

Here’s to God keeping his promises and fart jokes to keep us laughing while we wait 🤣
Posted by Katie at Tuesday, March 24, 2020