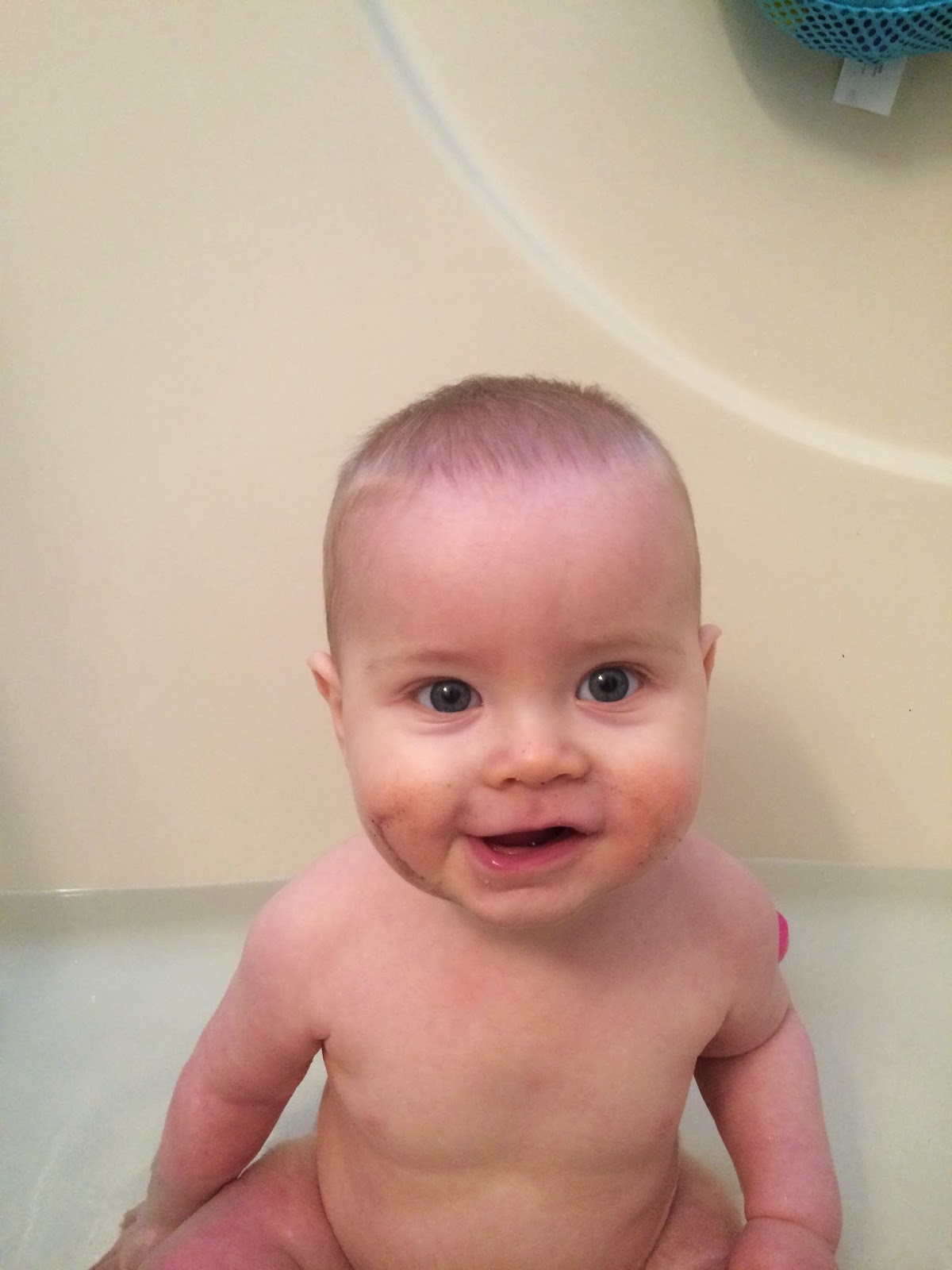 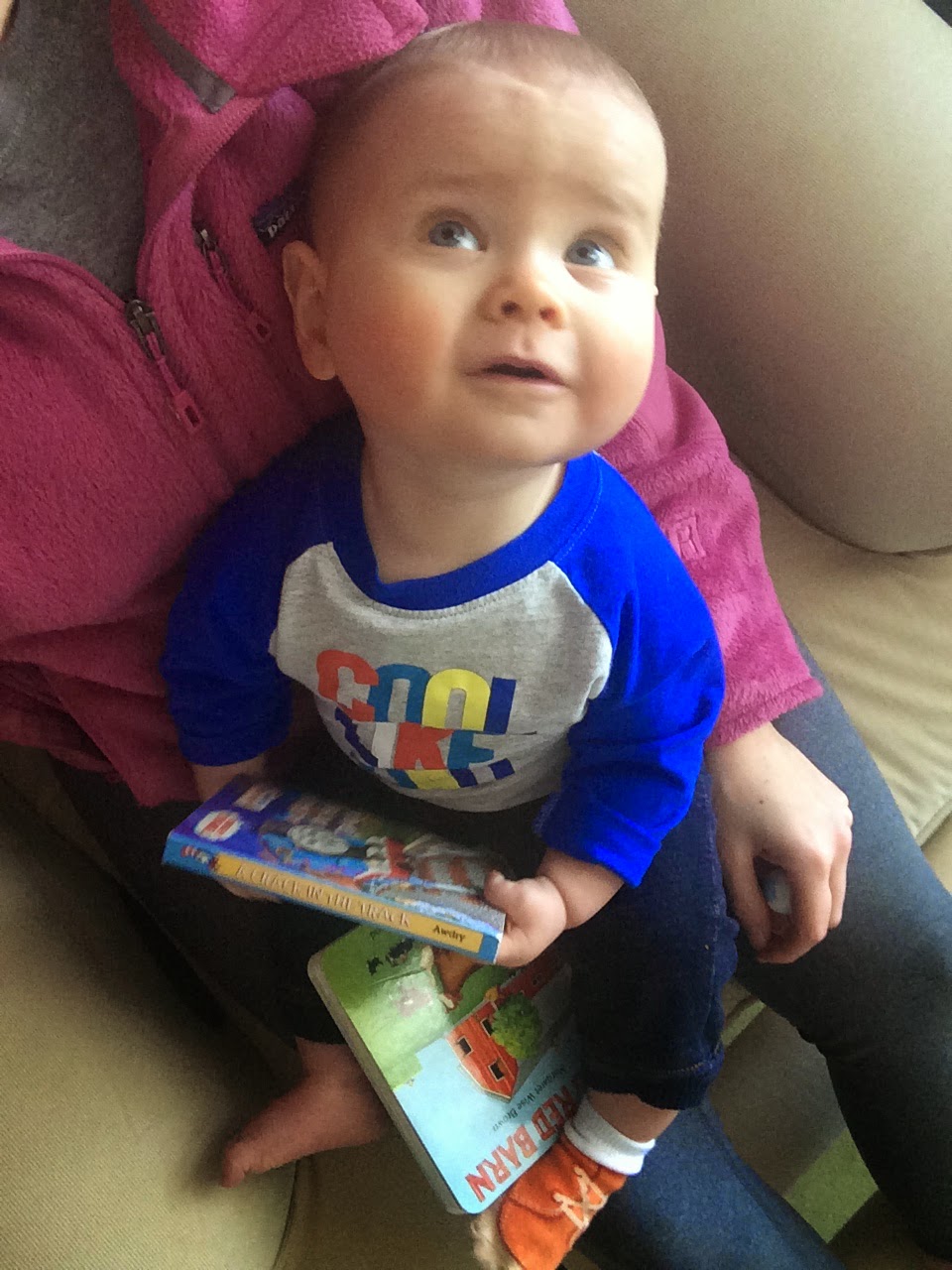 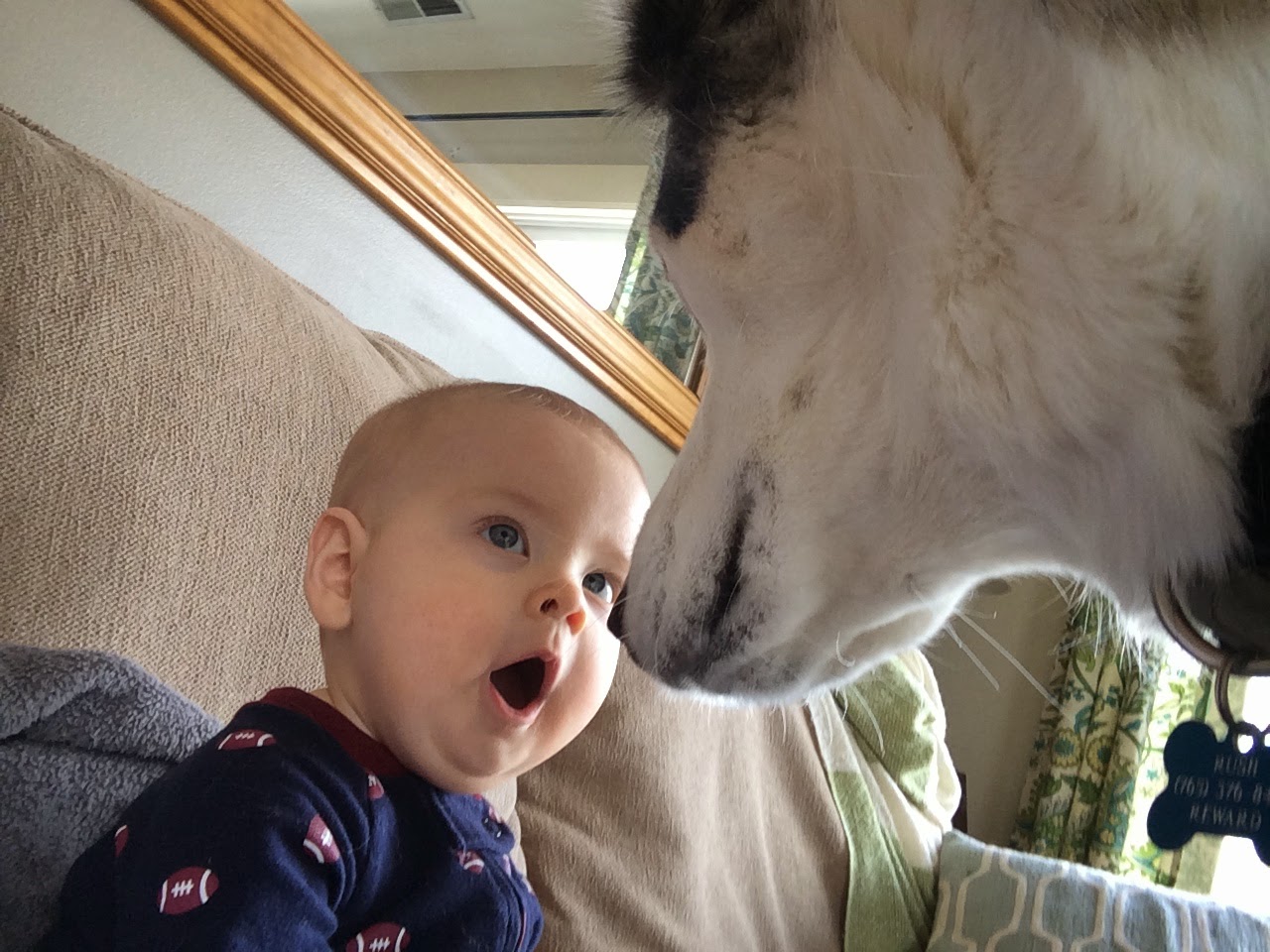 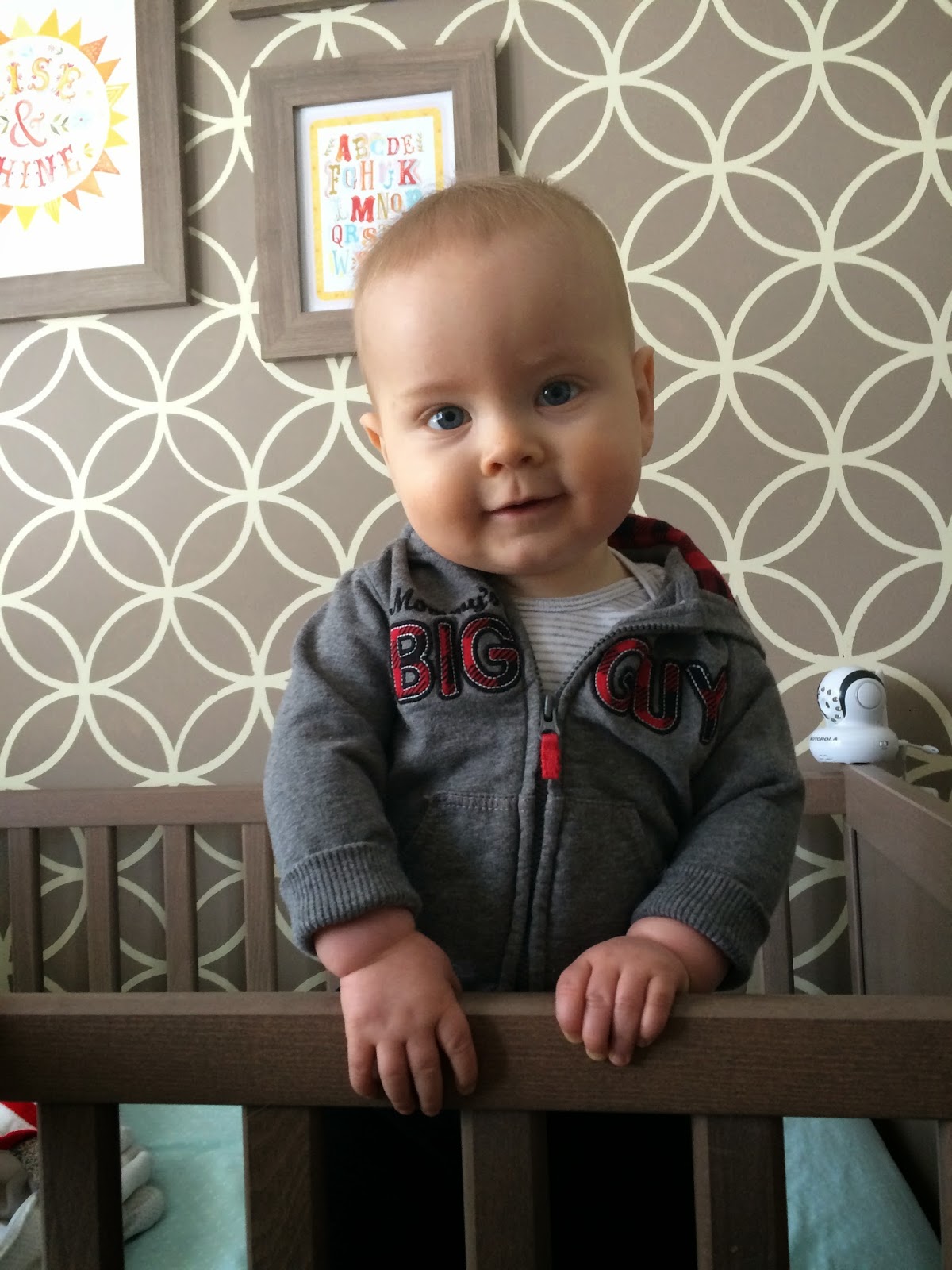 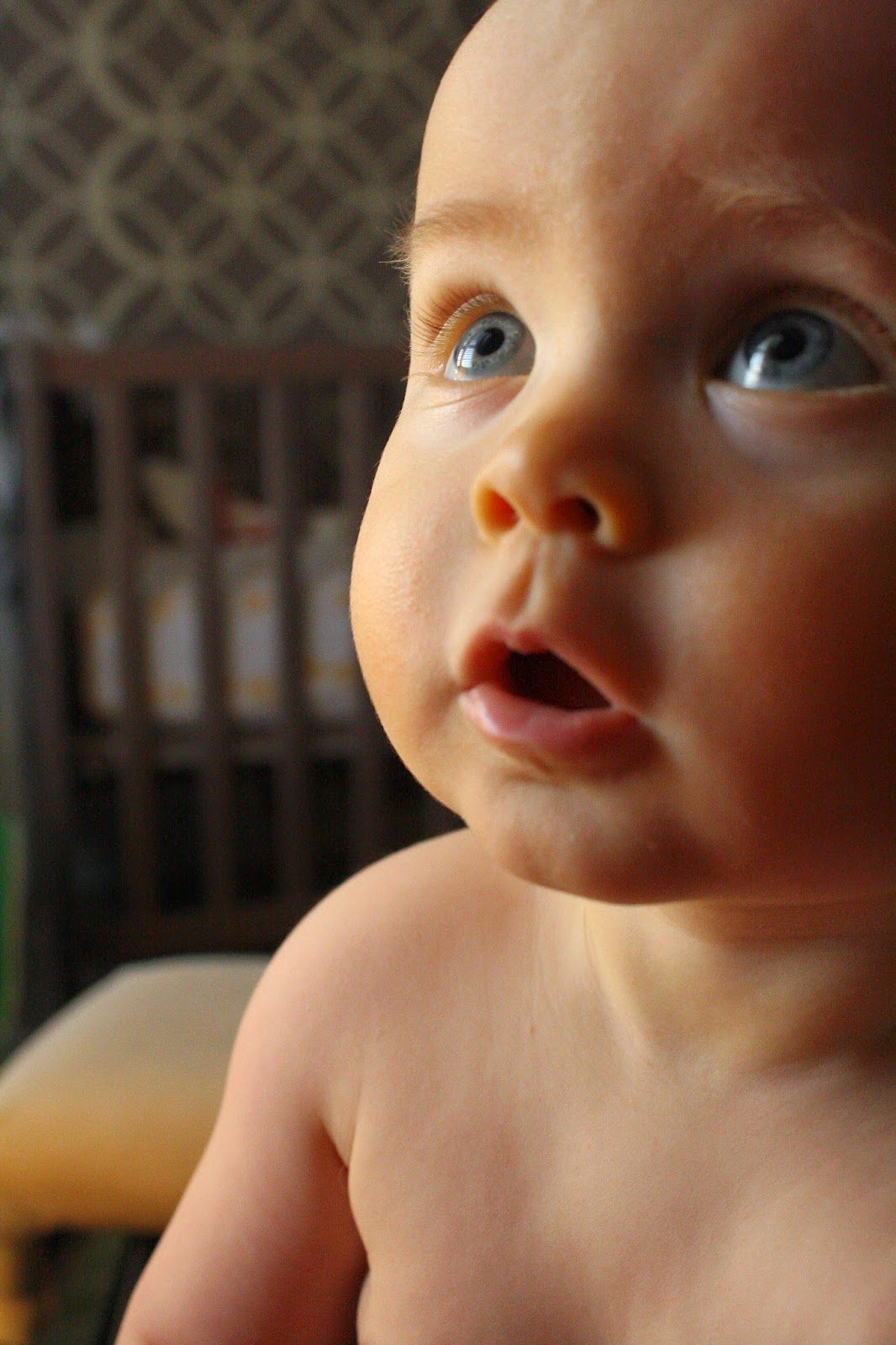 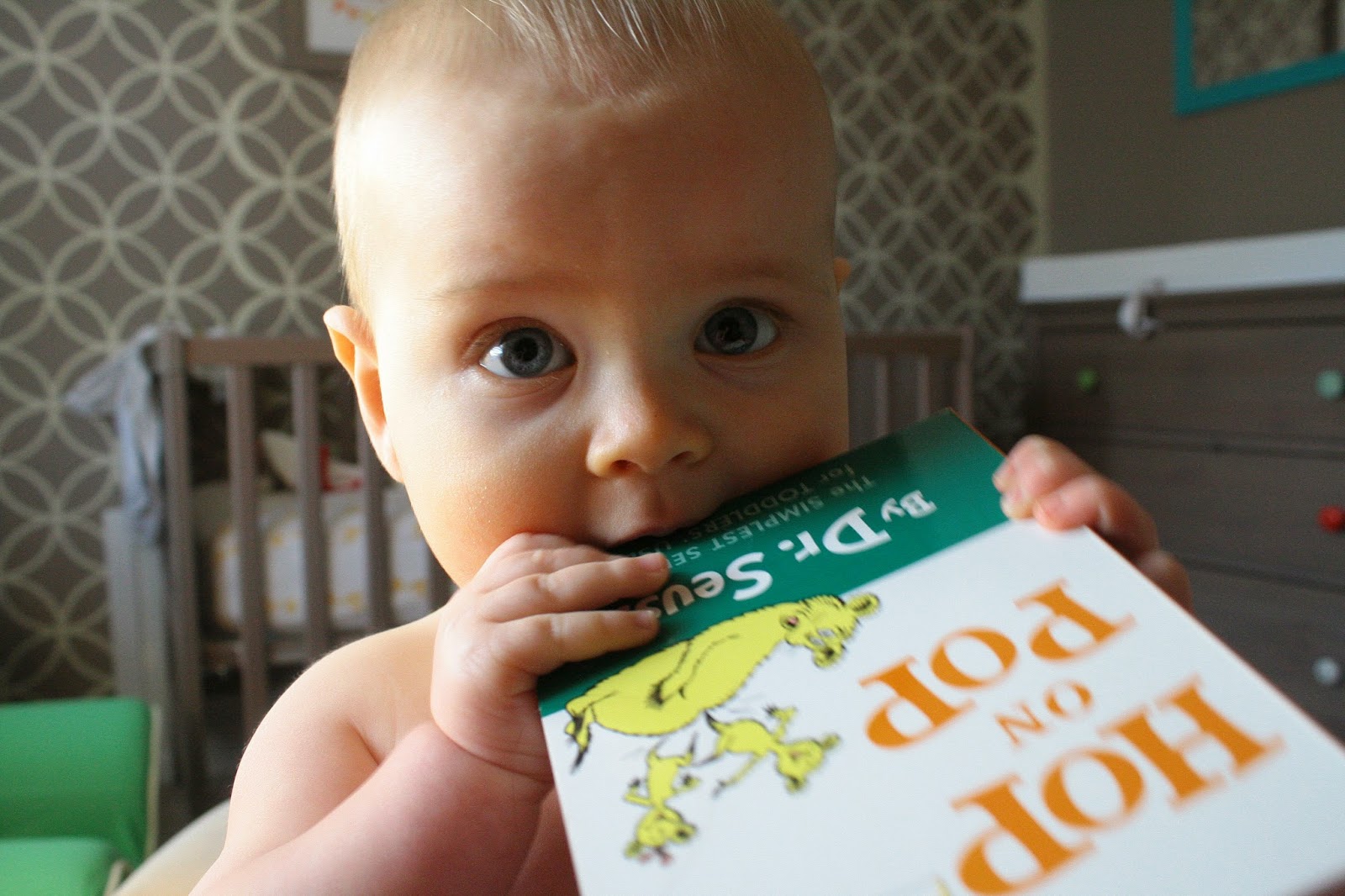 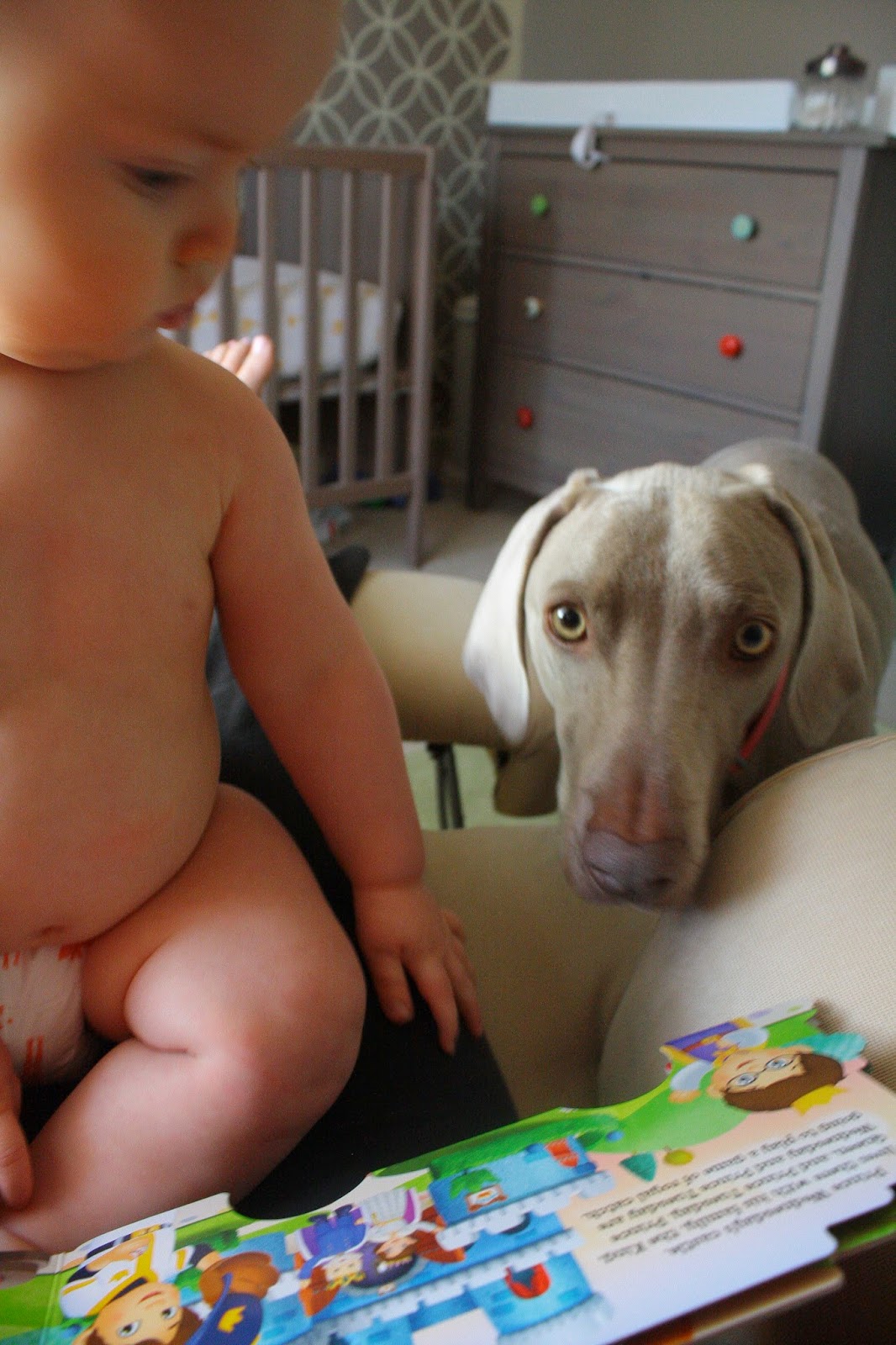 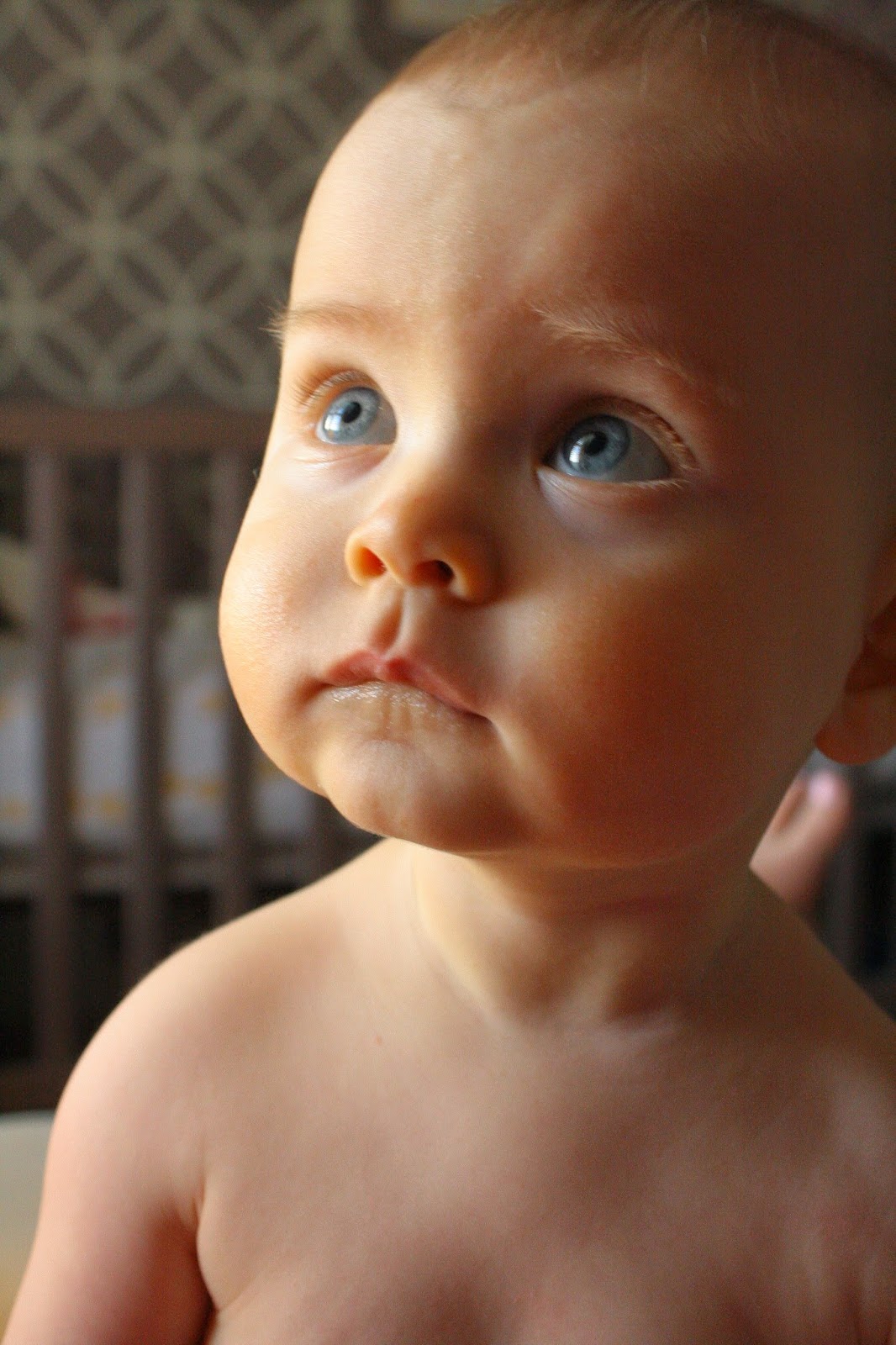 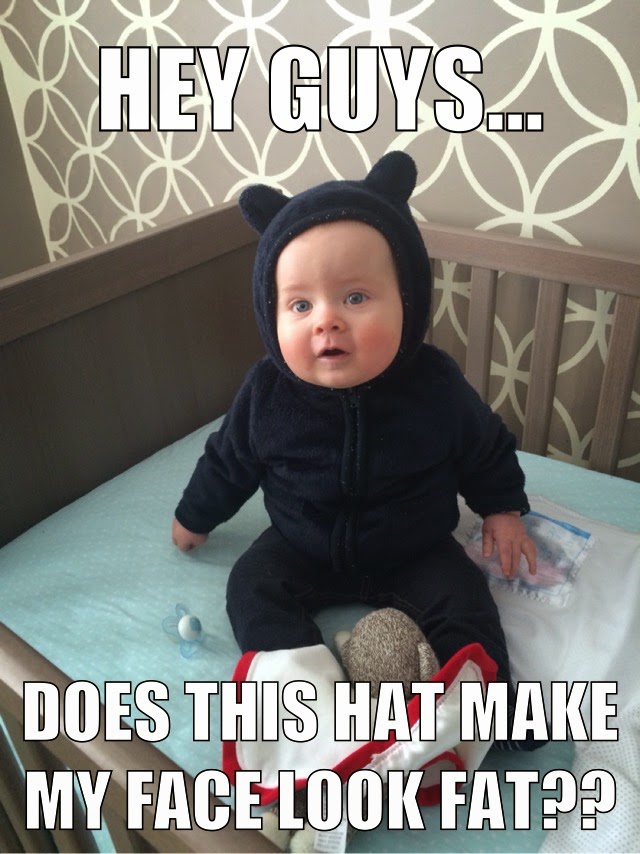 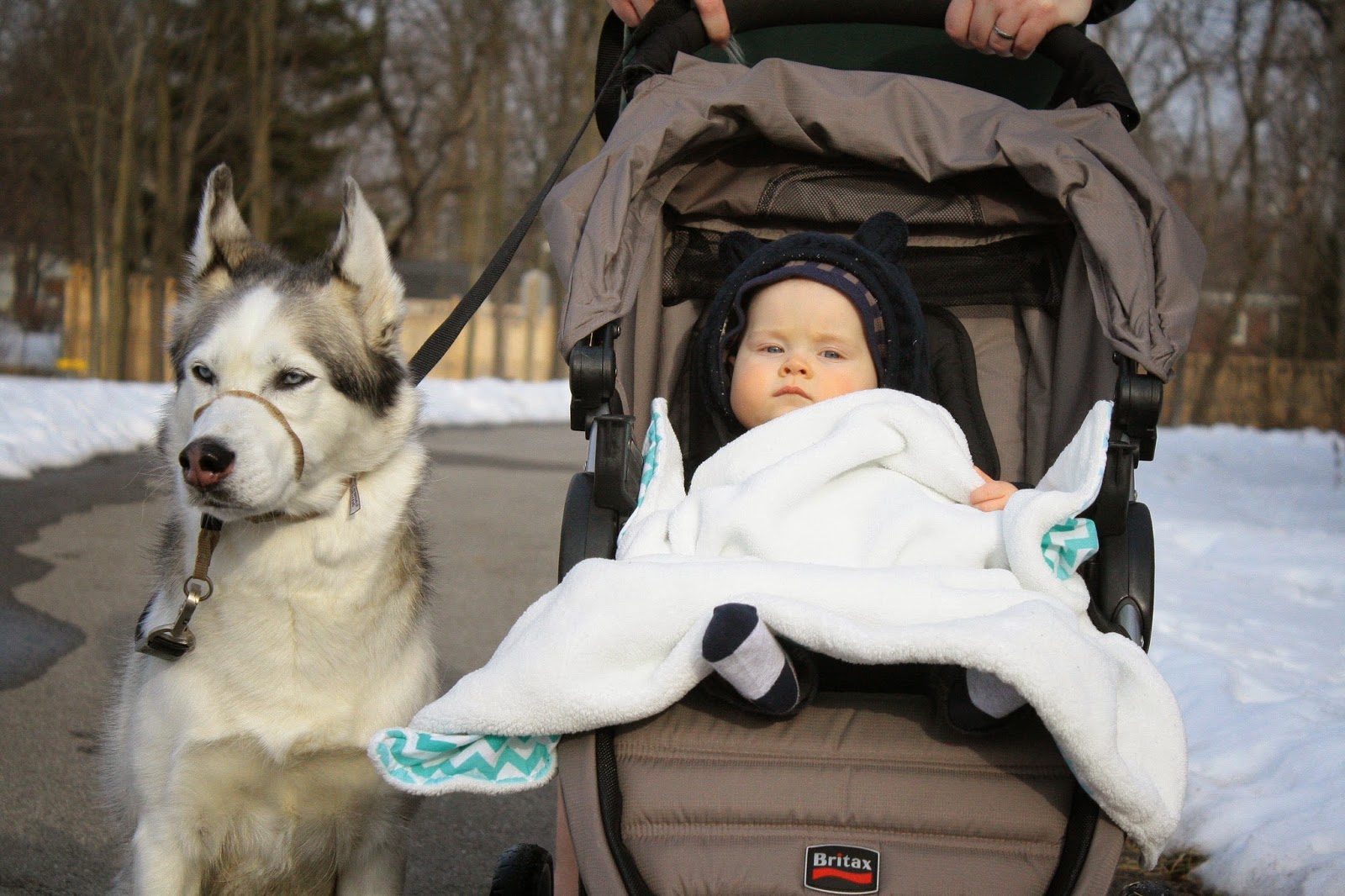 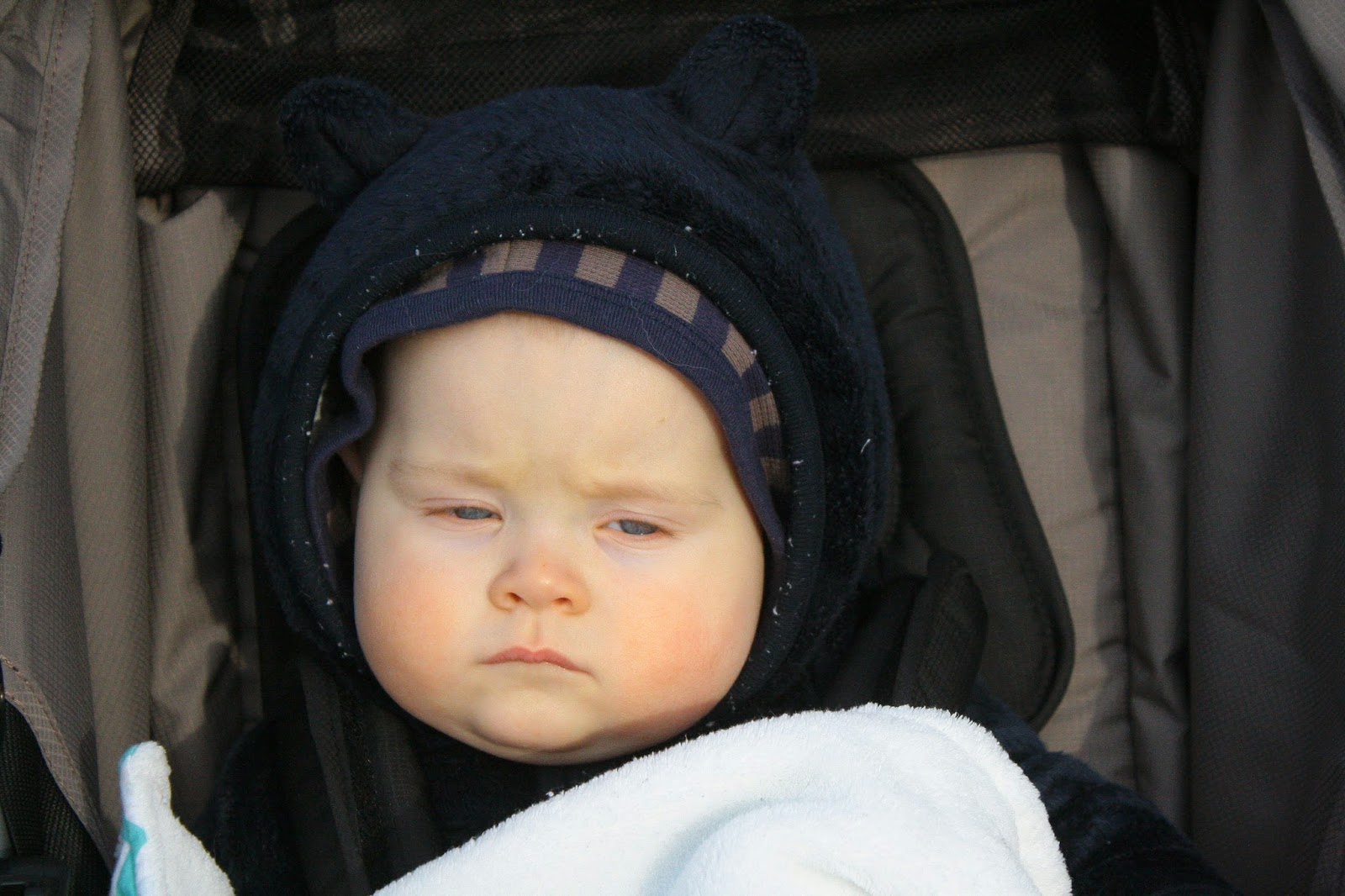 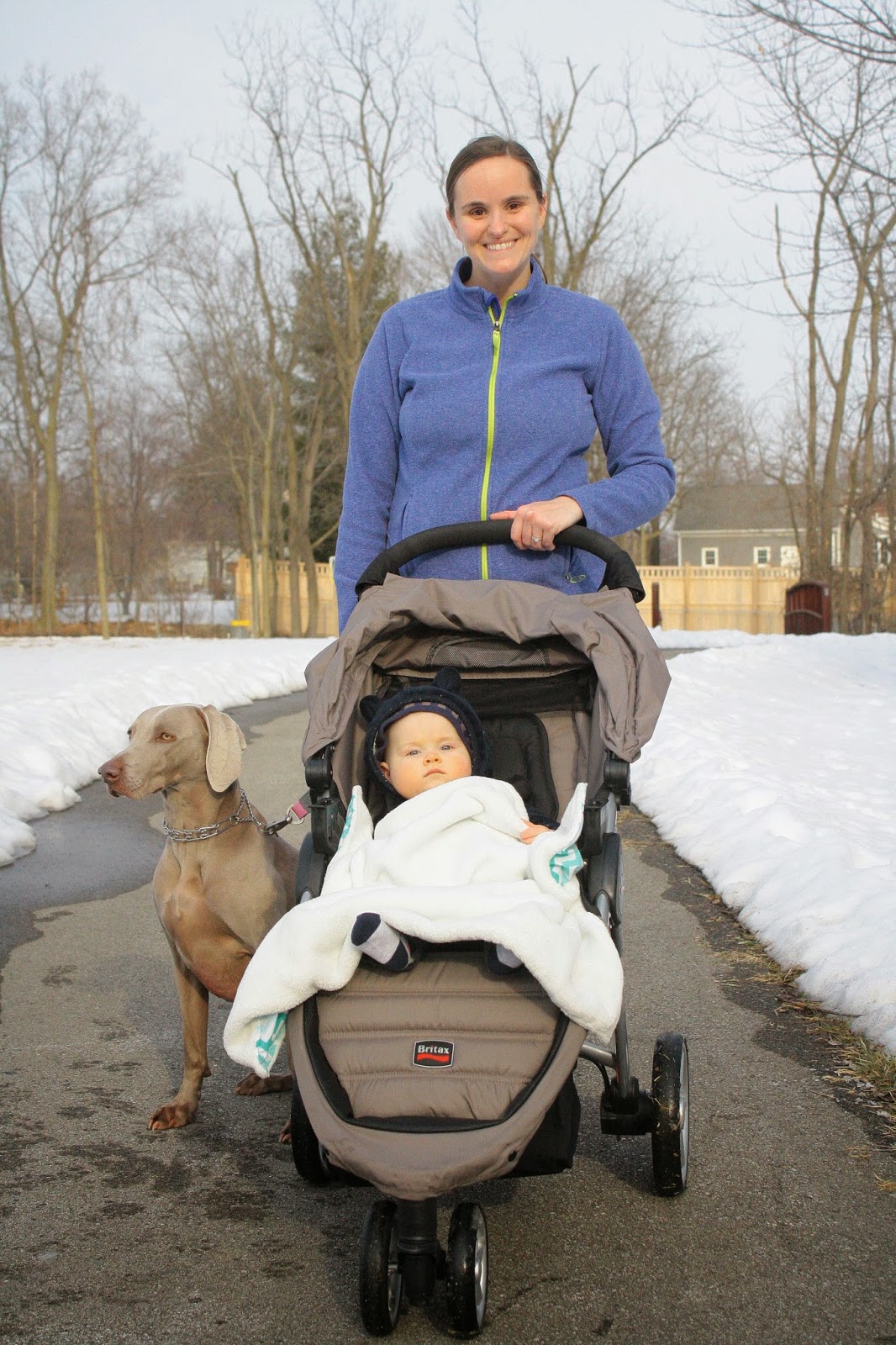 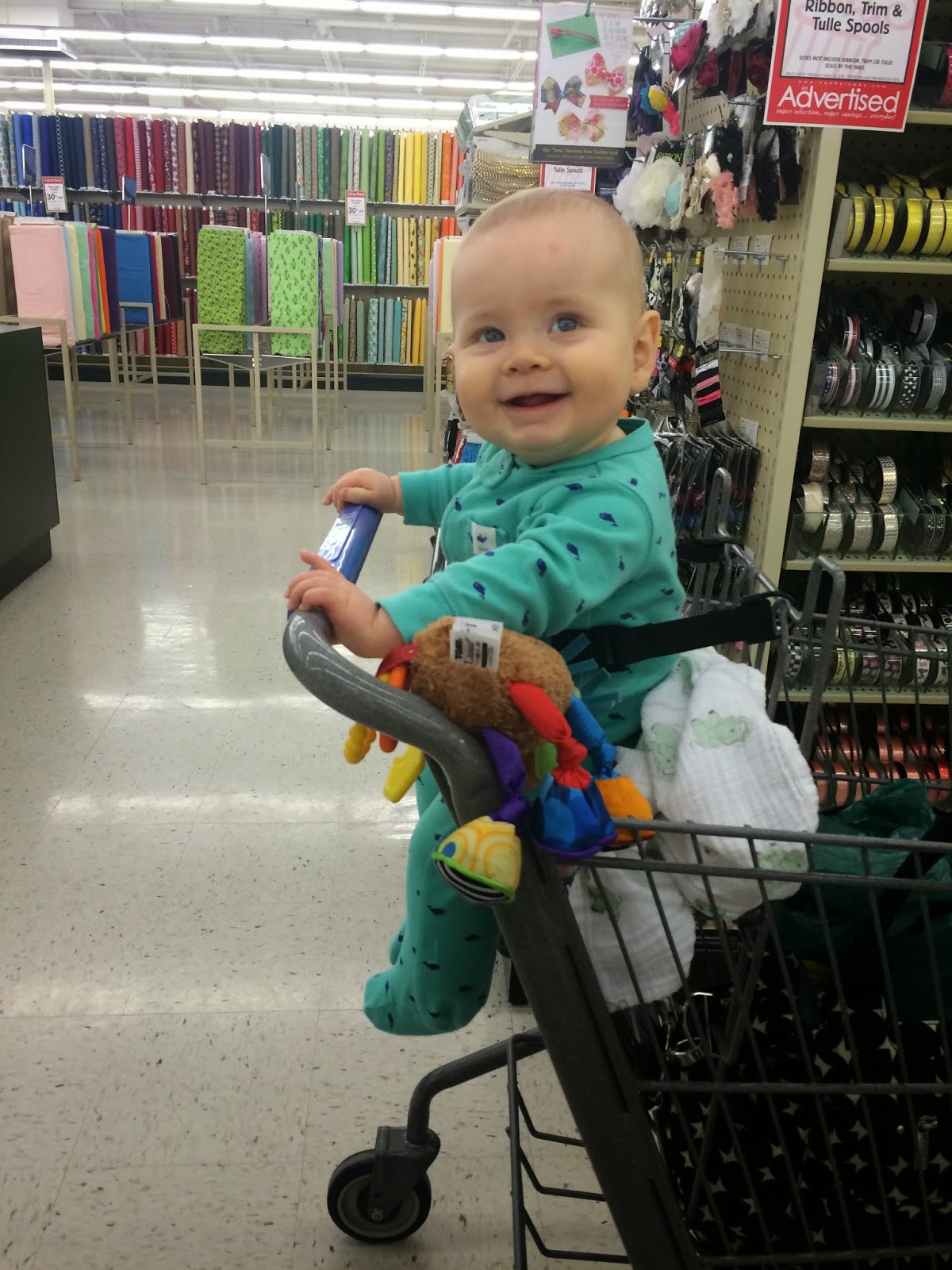 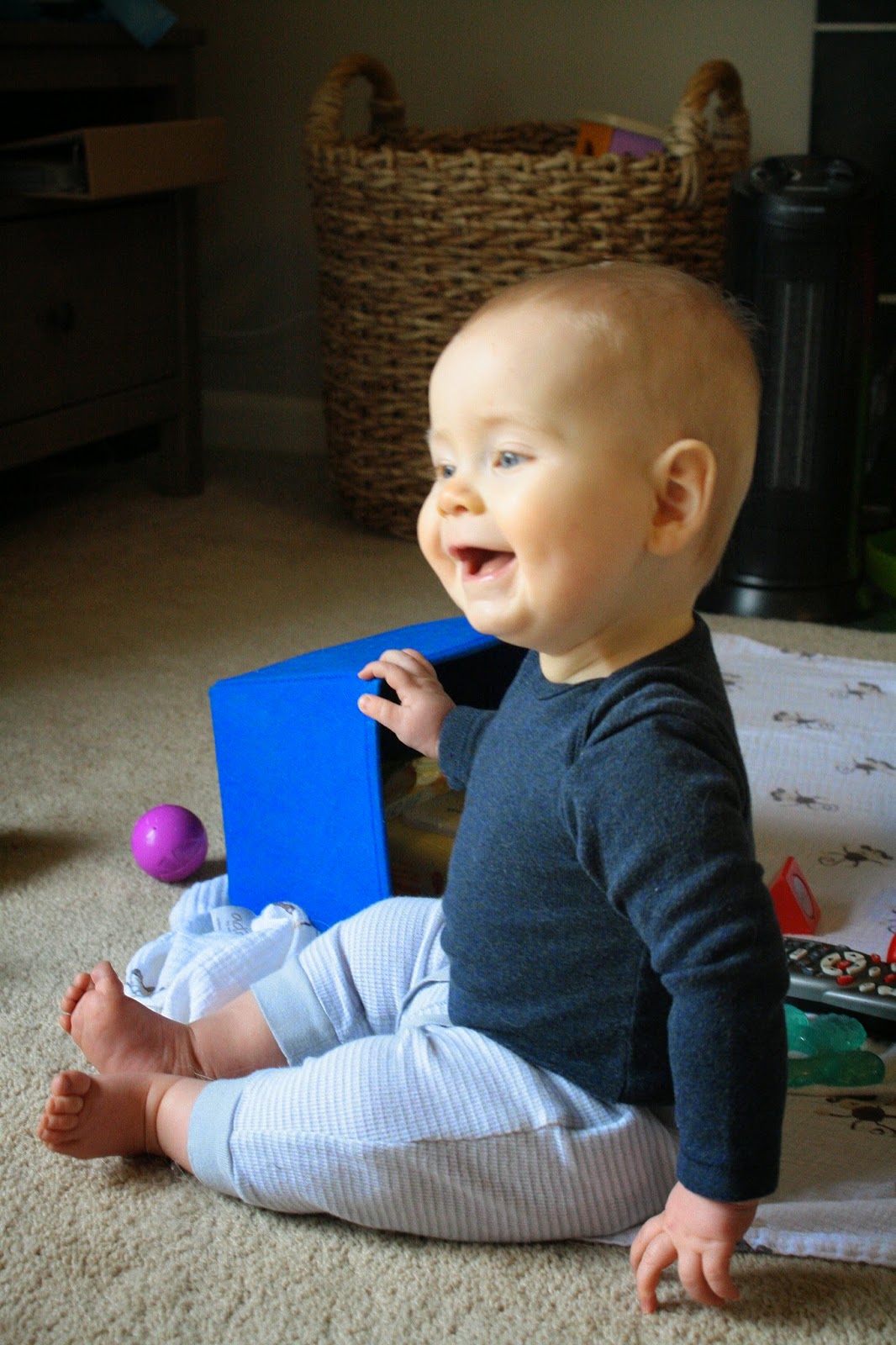 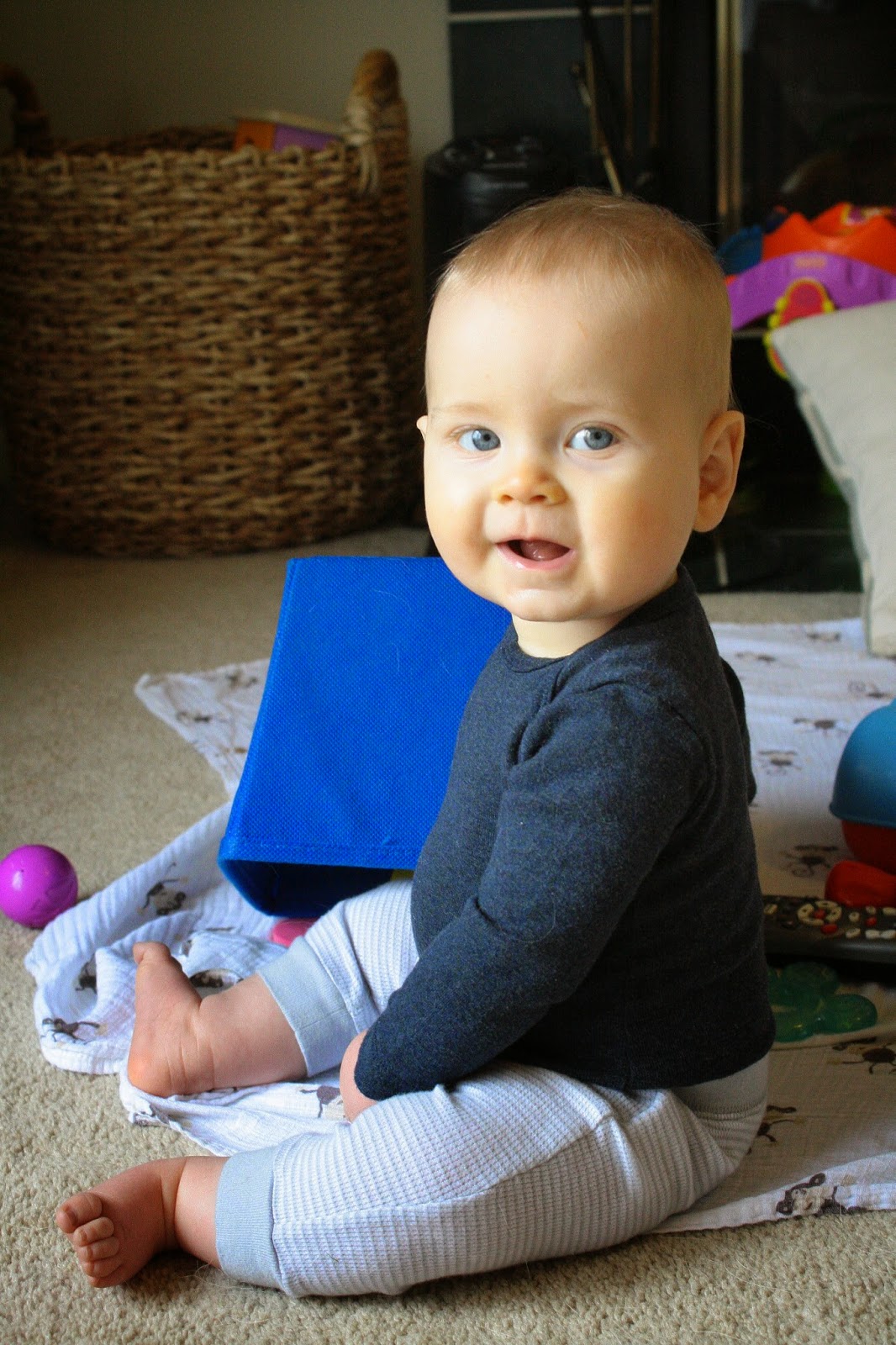 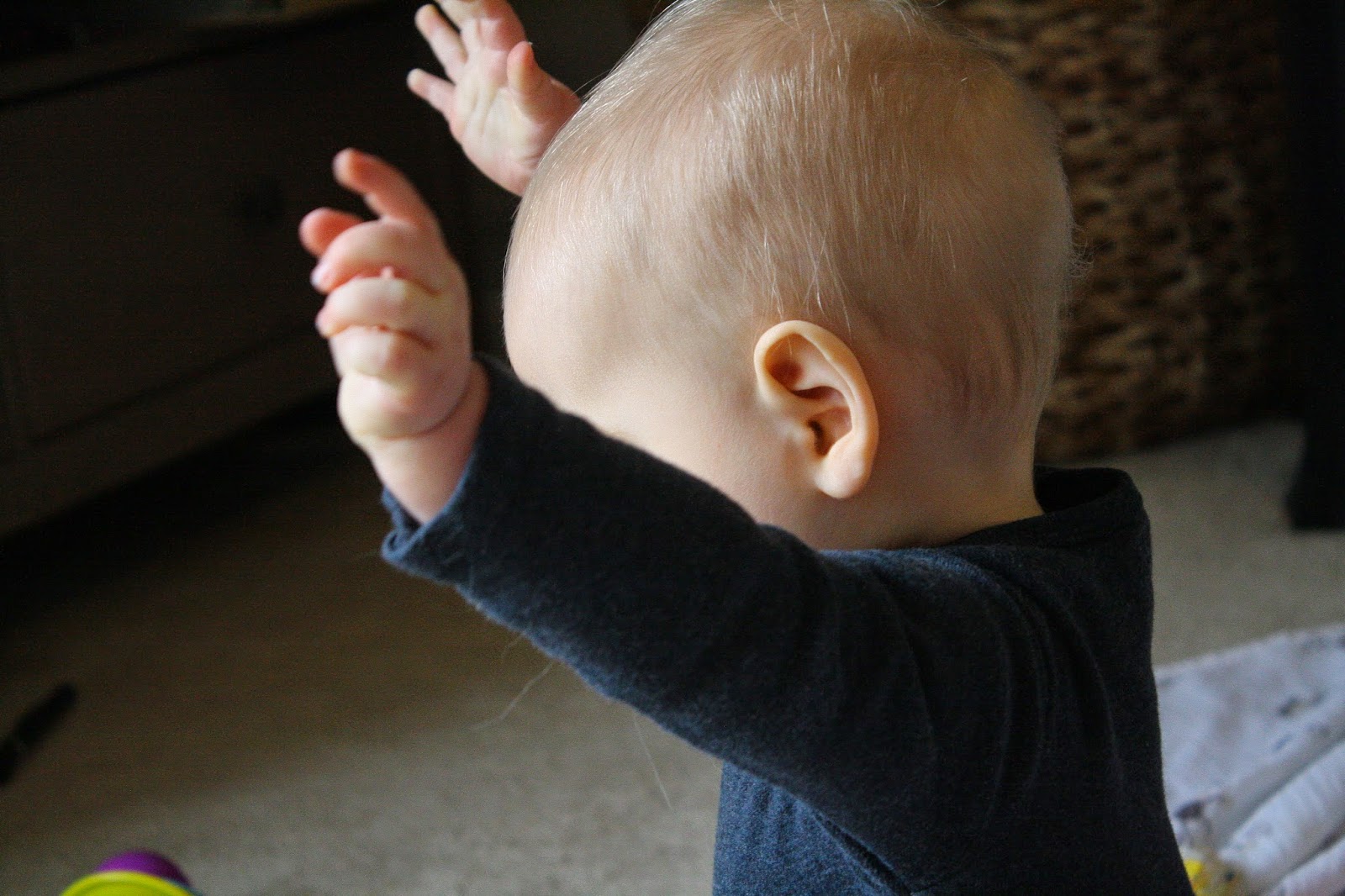 Please tell me you noticed those angry chubby faced photos from our walk over the weekend. Can you even??? Caleb actually loved our walk and was in a great mood, but good gracious, you would never know from those awesome photos! I can't get over his ridiculously chubby cheeks!
Remember when I mentioned the serious attachment phase? It's over! He definitely still loves me, but those sweet snuggles have ended. Instead, we've {finally} entered the highly anticipated teething stage. I mean, at 9 months, we were really pushing our luck with no teeth yet. But he's got two coming in on the bottom and they've popped through the gums finally! I'm guessing that was that most painful part for him? Because he required a steady dose of Motrin right up until then, but now is back to his normal self. Thankfully, it hasn't impacted his eating or sleeping. And he'll have two cute little teeth to sport soon!
Mostly, though, I think Caleb must have looked at the calendar and noticed he has a doctor appointment next week. It's like he didn't want to embarrass me by still not doing half the things the doctor is going to ask me about. So, right on cue, he rolled himself onto his belly in bed last week. FINALLY. At nearly 9 months. Child, you are slow and stubborn. He hasn't rolled since, but he definitely can and just chooses not to.
I just love this stage he's in. So interactive and fun to be around. Now that the weather is warming up, I'm leaving his carseat in the car and sitting him in shopping carts wherever we go. And he loves it. I mean, loves it. I'm working on lots of sewing projects, so we've made the rounds to all the fabric stores lately and he's hammed it up for all the middle aged women working the cutting counters. Also, I don't have one of those fancy cart covers and I'm noticing some judgy mom-glares in stores lately. But there's a 98% chance I still won't buy one.
We've been working really hard on waving, and while he is pretty awful at it, it may be sort of sinking in? Because he has started just throwing his hands up in the air {as captured above}. That, and hitting himself in the head over and over with his toys. I'm telling you, this phase is very fun {and funny} right now!
Posted by Katie at Thursday, March 12, 2015

The cart covers...no. We don't have one either and I feel like i've gotten some nasty glances. I always wipe it down with a lysol wipe and then put her in, so I feel fine about it. It just seems like a waste of money and more stuff to carry around. I already feel like a pack mule, so more stuff is just not sounding all that appealing.

Glad his little teeth came through too! Teeth are the cutest thing ever to me! It just makes for such a goofy smile!