Caleb was 7 weeks old on Monday and he decided to celebrate Tuesday morning by rolling over! I have been telling Justin he seemed on the verge of rolling from front to back, but was really thinking I was getting ahead of myself and that he had a month or so until he would actually roll. So clearly I was was ecstatic when he did it! Imagine a crazy lady, at 8 in the morning, clapping and cheering for another human rolling over. Motherhood is weird. I just happened to have my real camera out and was taking pictures of him kind of rocking on his side when he first rolled over and I gave myself a huge pat on the back for capturing one of his firsts on camera. Mom of the year! No worries, I balanced that out with letting Murphy lick his face a few hours later. We're all about evening things out over here. 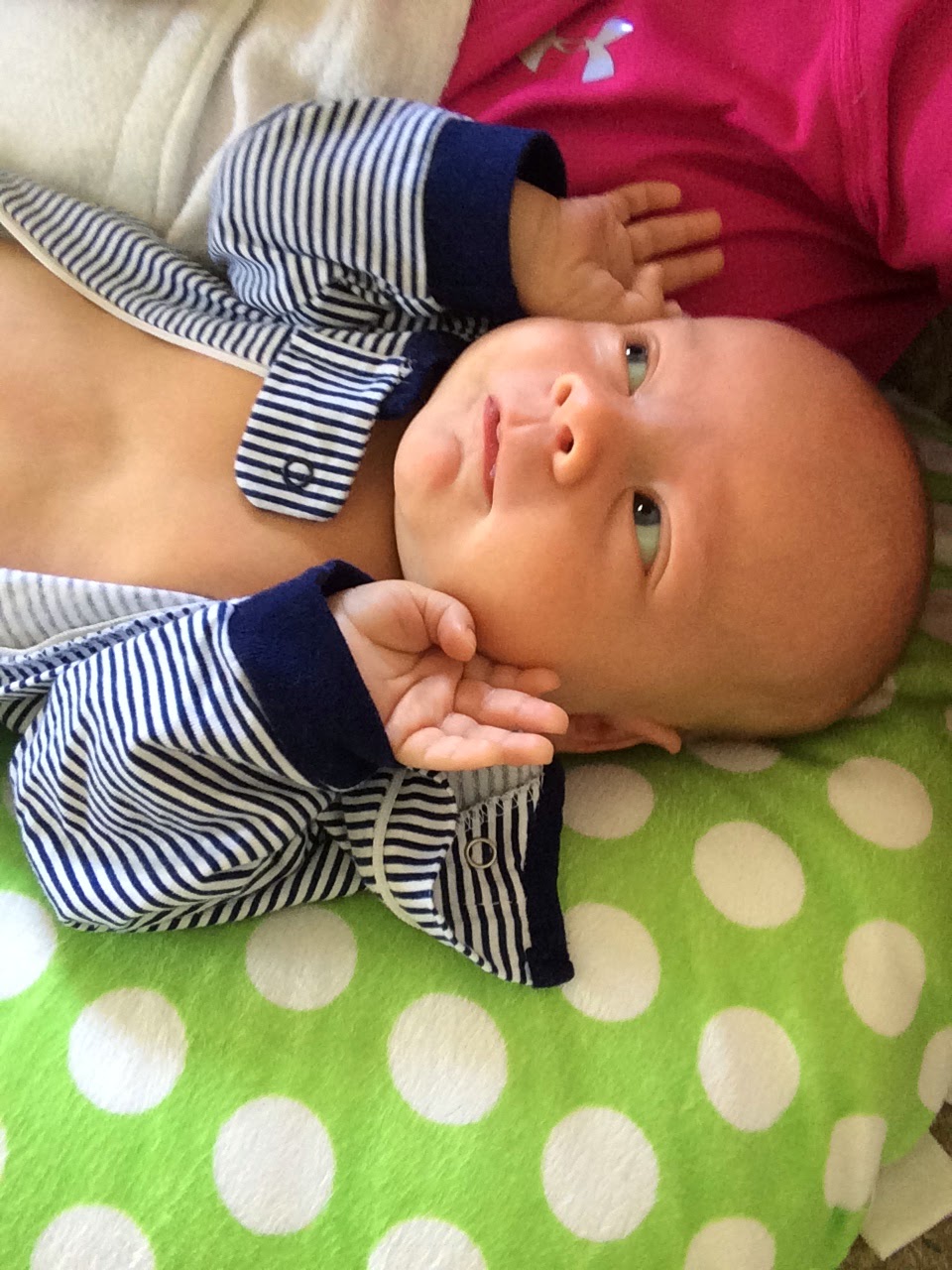 And {knock on wood} Caleb's down to one feeding at night! He finally dropped his first one and is able to stretch 5ish hours between when I put him down and he eats, and then again before he's up for the day. The past two days he's been on a bit of an eating/sleeping frenzy during the day, so I'm thinking he is going through a growth spurt? Let's just say I'm super impressed with how much he can eat and that my boobs haven't fallen off yet. Tmi?
Oh! Also of note, I packed up all of Caleb's newborn clothes over the weekend. I feel like this is some sort of huge milestone. I know most babies only wear nb clothes for a short time, but at 7 weeks our little peanut can still squeeze into some of them. We barely bought any and have just been rotating him through his small stash, so it's extra fun to get him dressed {and re-dressed *cough*spitup*cough} every day now that he's moved up a size. Child is chunky up nicely and finally fitting into 0-3 month outfits.
And, because it might be our favorite part of the week- let's chat about swim class. It is so stinking fun and Caleb is by far the youngest guy there. He's clearly not ready to reach for toys or giggle or blow bubbles, so instead he just chooses to sleep. The pool is really warm and within seconds of us getting in last week, he fell fast asleep and stayed that way for the entire 30 minutes class. Gosh, it's adorable.
Posted by Katie at Thursday, August 07, 2014

Email ThisBlogThis!Share to TwitterShare to FacebookShare to Pinterest
Labels: caleb