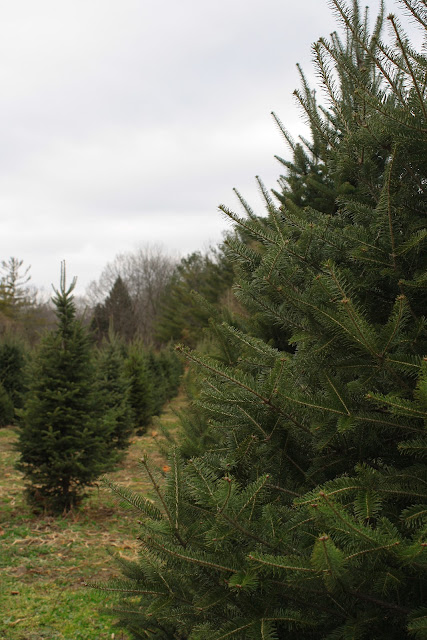 The day after Thanksgiving, Justin and I headed out to cut down our first tree! Growing up, my family always had a fake tree. Justin's family always cut down their own (until they moved to Florida). Since we've been married, we've always picked up a real tree from Lowe's. And I'm addicted to having a real tree...so Justin agreed to take me to cut our own this year.
I was not disappointed! 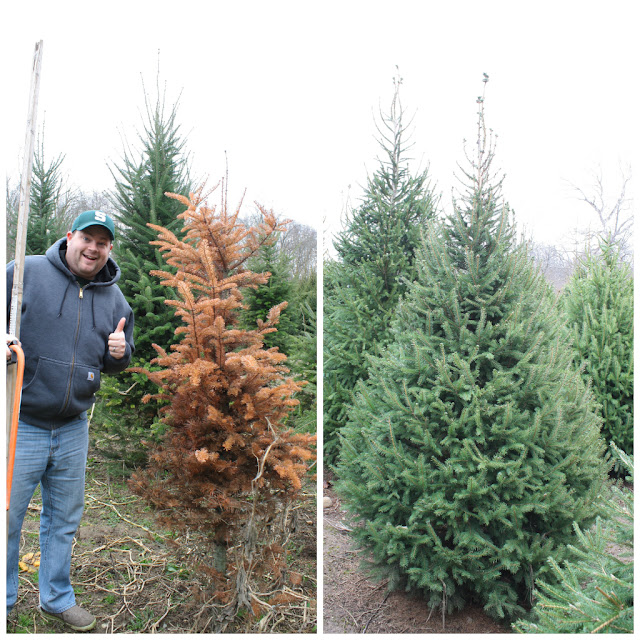 Justin wanted the tree on the left...we settle for the tree on the right :) A plump 8 footer. That ended up being quite pricey. Next year, we're definitely going the long needle route!

After getting the tree home, we quickly got it in the stand and watered and then headed out the door again...
because Justin had planned a surprise!
A couple massage.
{he's a keeper, for sure}
Guys, it was heavenly.
After the one hour massage, we grabbed some yummy cheesecake factory and went home to decorate. While watching Elf. And with a fire burning. 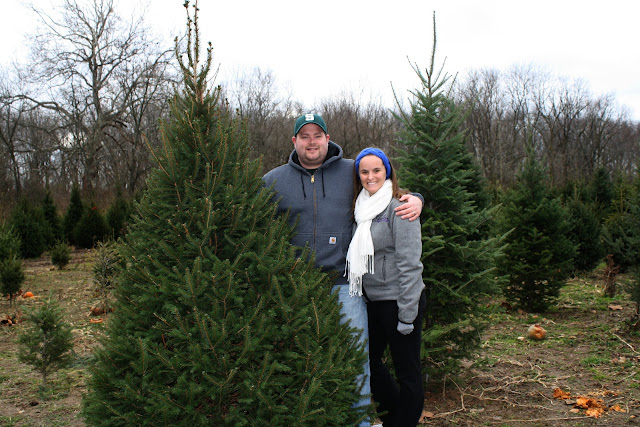 Do you cut your own? Use an artificial tree? Justin kind of hates the hassle of a real tree and wants to get a fake one. But I can't get over how wonderful they smell and how fun picking one out is! I don't think I'll ever go back to fake...

Sounds like it was a wonderful day! Where did you go for the couples massage? We've been to Villagio day spa in Zionsville a couple times and its sooo nice! We've had a fake tree since we've been married...I don't know if our allergies could handle a real one!

My family never buy Christmas tree before..but we did bought one in our office..the fake one,of course.We can buy real one in Ikea only,I'm so jealous that you cut your own tree.

I've grown up using an artificial tree, but last year, Andrew and I decided to get a real tree. We had to get ours at Home Depot or something, but I loved it!! ...it's been a goal of my to actually go to a tree farm, though.

We always did a real tree in Marion, but city apartment living has changed things. We went with a skinny fake tree this year to eliminate mess and save space. I think it's cute, but I miss the real tree smell!

Ok, but more importantly, have we ever talked about my first interaction with Justin in college? He was sharing in detail about getting a massage. So funny.

What a fun day! We always cut our own, they are only $28 at the place we go, & they shake and bag it for you too, making transporting it SO much easier. We always get breakfast first... I think secretly that might be my favorite part :)

In all my adult life, I've never had a real tree. Years ago I bought a 2000 light prelit 6 1/2 ft tree that I used for about 4 years. Then with all my moves, I gave it away (it was massive) and now have a tiny little one I've used the past couple years.

I'm not sure I want the hassle of needles everywhere, but I think at some point, I'd like to get a real one, if not for the experience of cutting one down. Sounds fun!
Emily at Amazing Grapes

What a perfect tree! I've never cut my own but Shehan and I decided it would be a great tradition to start when we have kids and they're old enough to go.

Your tree looks so perfect! I love creating new traditions too!

we have a fake 7.5 foot tree. I have a slightly huge irrational fear of any kind of insect or bug. So i could never do a real tree. Just the thought of it sitting there, possibly having spiders or ticks insides its branches FREAKS me out. I know im crazy. Even the flowers at my wedding were fake.. just in case...