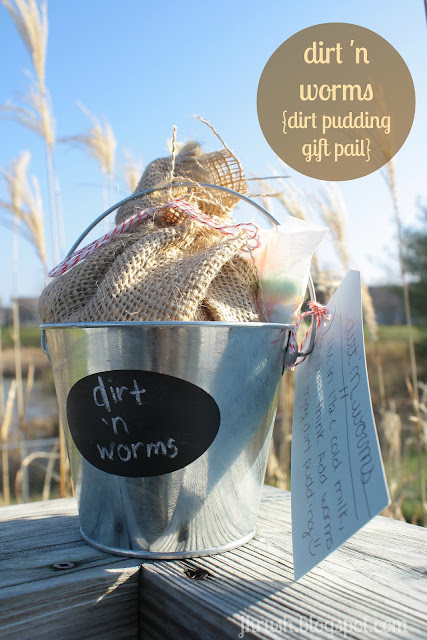 If there's anything I'm a sucker for, its cute packaging and sweets. When you put them together? I can barely handle it!

For last month's Cara box, I was matched with Shawna. The theme was childhood and I quickly learned that Shawna was all things tomboy growing up (building forts, playing with salamanders, and even hated Barbies!). I knew I wanted to include some sort of play on that in the box...and realized I had to put in a package of dirt pudding! Cute, right?
I was a bit stumped on how to package it at first, until I remembered these cute galvanized pails I had picked up at the dollar spot in Target a few months ago.
After that, I literally just picked up a single sleeve of oreos (you can buy them in the snack aisle at most drug stores/gas stations), vanilla pudding, and sour gummies. After smashing the oreos and pouring in the vanilla pudding mix, I wrapped them in some scrap burlap and tied with bakers twine. I put the sour gummy worms in a glassine bag and...voila! Dirt pudding...or a pail of dirt'n worms! 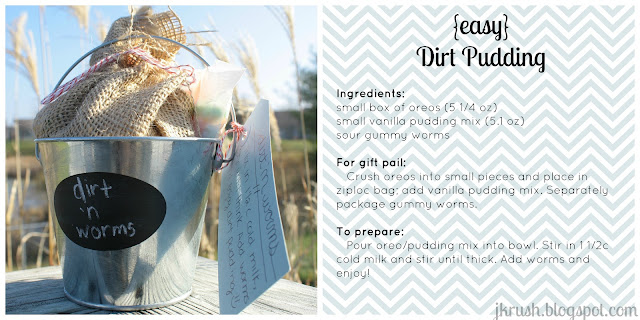 Cute, right? What fun gift ideas have you come up with this Christimas?

I'm totally going to gift this for Christmas! Thanks for the idea! I might give it to my niece so she can take it to her teacher :-)

Super cute blog! I just came across your blog! I would love for you to come check out mine, maybe we could follow each other?
-wHiT

So glad to see the tutorial--and read how easy it is!! I just love it!


I'm going to need to know how to watermark all your pictures, too. I just think it looks so much more professional..

You're so darn crafty!
Emily at Amazing Grapes

Katie, I LOVE this idea!! So creative, fun and easy!

My food cravings have been off the charts lately (emotional finals eating, woot woot!!) but now I reallllly want some pudding and Oreos. Thanks.