Remember how I said yesterday that Valentine's Day had a extra special, not so obvious place for us?
Well here's why... 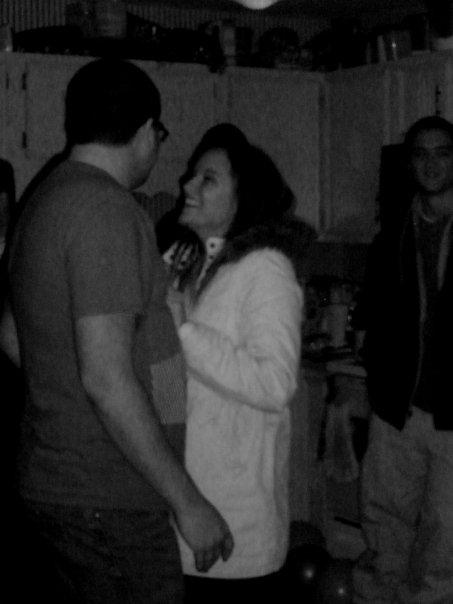 J proposed at midnight after Valentine's Day three years ago!

{and then surprised me with a manicure and amazing surprise party the next day!}

So in honor of our engage-aversary {which J would want me to be clear is TODAY, not yesterday}...I thought I'd tell the last part of the story. {Catch up on the first part here}

The day of the surprise party was pretty normal.{As normal as the day after you get engaged can be!} I just happened to be sporting some gorgeous new bling! So we headed straight from my manicure appointment to youth group {where we both volunteered as youth leaders}. We hadn't been back to campus yet since getting back into town, so after youth group he said he still had a surprise for me. But we had to stop at his house to waste a little time before "the surprise." So at this point, I kinda figured he had arranged something with our friends, but at a restaurant or something.
So we get in the car and head to his house, but he started complaining about having gas and feeling like he HAD to crap.
Yup. That's my man. Filling me in on allll the little details.
He said he didn't think he could wait til he got home so we stopped at CVS. The whole time he was inside, I was seriously concerned for his stomach, since he was complaining so much.
{turns out the stop was just to stall and make a quick phone call!}
Then we were off again.
Once we got to the house {that he shared with 7 other guys} we were met in the front room with a few of his roomies and a girlfriend or two. J said he still had to crap so he ran to the bathroom again and I was sharing the good news with everyone.
All the sudden, I hear J in the kitchen asking me to come make him a sandwich.
typical.
My reply?
"Justin! You have diarrhea!!! I'm NOT making you a sandwich."
To which he replied, "Just come in here!"

And I walked into the dark kitchen to a loud "Surprise!" from about 50 of our closest friends and tons of signs, posters, and the cutest engagement cake made by my friend Gretchen {that I don't have a picture of :( }

I was so overwhelmed by love and support, I burst into tears.
It was a really, really good day.

And after the party, I headed back to the dorm for my ring down {a SWEET Taylor tradition}, filled with more squeals and excitement!


Thanks for the pics, Hillary!!!
{sorry they're so blurry...there was MUCH excitement!} 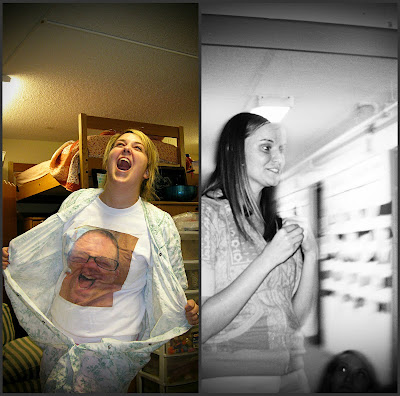 {My roomie Hil wearing tear-away pj's w/J's face underneath to show her excitement; Holding the ring down candle! It's me! It's me!}

{Telling the engagement story!; Showing of the bling:: 3 engaged roomsters and one cute single one!} 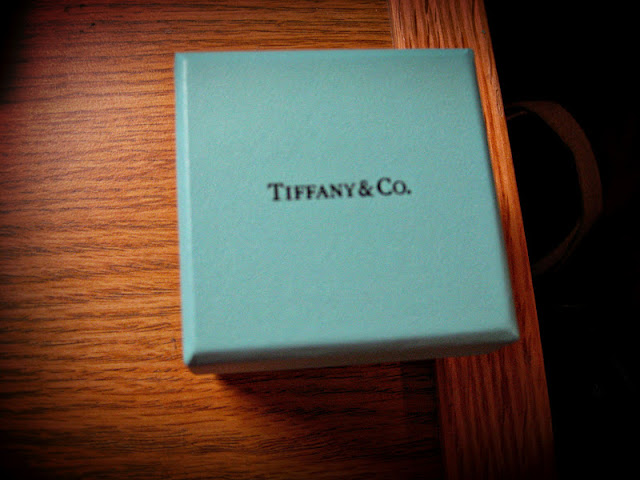 le sigh. It was a good day.
It's been an even better 3 years since then.
I'm one blessed girl.

i loved that day. i love you still!!

this is so sweet!! what a great story!!

oh men!! They sure don't censor do they!? hahaha

You'll have to explain the 'ring down' story. I don't get what that is. =/

Love the surprises though!! What a guy.
Emily at Amazing Grapes

Katie, I just read both posts, and I think you have the sweetest husband ever. You seem like the sweetest person ever, so you two are perfect together.

P.S. I would have been laughing so hard about the diarrhea comment, that I would have totally spoiled the surprise;)

Awww, the day before Valentine's Day is the anniversary of our engagement.